This is a short story that I wrote a few yeas ago based on a prompt from my writing instructor.

She handed out papers that were not to be turned over until every student had one. Then face to face with these cropped portrait images from magazines, we were to list positive qualities of the person we saw and negative qualities. This person was totally foreign to me but unlike some of the students, I was not going to trade him in. We were given a short time to list qualities and then write a short story, very short. 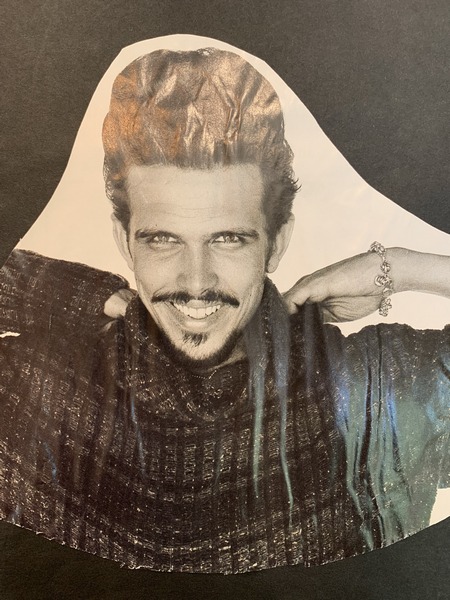 And the story that came from from our brief time together….

Tony was combing his hair in the practiced sweeping motions he used on his older clientele. Just enough product to keep it in place and just enough styling to create an illusion. Tony was all about illusion, not even he knew if there actually was anyone inside those tight black jeans, T shirts and body-hugging black leather jacket.

God, he loved seeing himself in that jacket with all those shiny silver zippers. Pulling those hanging little tabs up and down, back and forth just to hear that sound. He loved that jacket and how it made him feel – pretty but tough. And that was how Tony saw himself – it was all he saw.

One more bit of lifting in the back and he was ready to go. Putting the comb down on the edge of the sink, he noticed the grey hairs. There weren’t that many but enough. Enough that he reached for the phone and dialed Flo.

“Can you open for me this morning? I will be just a bit later getting into town. Something I need to take care of here before I come in.”

“Sure honey. Take all the time you need. It’s a slow morning for me and your first appointment isn’t until 11:30. Everything alright?”

“Yeah, just some personal maintenance that’s easier to do here than at the shop. You know how I like to look my best.”

“It’s what drew us to this business, honey. See you when you get in.”

Flo hung up the phone and reached for the small bag inside her purse. With Tony not coming in for a while, there was time. Not only time for her to have a small hit, but come down from it as well. She was going to stop doing this. She knew she was. Just not today. Today she needed to get herself calmed down and ready for what was coming tonight. She promised herself that today was the last. She promised herself as if there was going to be some kind of difference between one day and the next.

There was never a problem laying out the strip of cocaine – not in a salon that had hand mirrors on every surface. Even the blade for scraping it into a straight line was easy to find here. She pulled out the short straw and placed one end on the line and the other up her nose.

One deep sniff, one deliciously deep inhale of pure peace of mind.

Flo wiped her nostrils with the thumb and forefinger of her right hand and with the dampness picked up whatever cocaine was left on the mirror. This she rubbed inside her mouth on the lower gum and smiled. Her mind raced again to the simple solution of just getting home tonight before Fred got there, and pack her things. She would be gone and she could start over. She could start over anywhere. She had the money saved and hidden away. She had plenty of reason to go. Sure she would miss her job. Even miss Tony and miss her customers. But it was time. It was past time. She sat down, hard, and closed her eyes.

It was not quite 10:30 when Tony parked and chained his Honda in the alley by the back door.  It was unlocked so Flo was already here. Good. The coffee would be on. He headed into the little alcove kitchen to pour himself a cup before going into the salon.

And that’s where he found her. At first he thought she was taking a quick nap before opening.

“Hi Honey, thanks for getting in early.”

He reached out to touch her, held back a moment and then laid his hand on her cheek.

He took the mirror from her lap and laid it next to her bag. He straightened her skirt and reached for the comb. It will only take a minute, he thought. And found the hair color to touch up her roots before making the call.