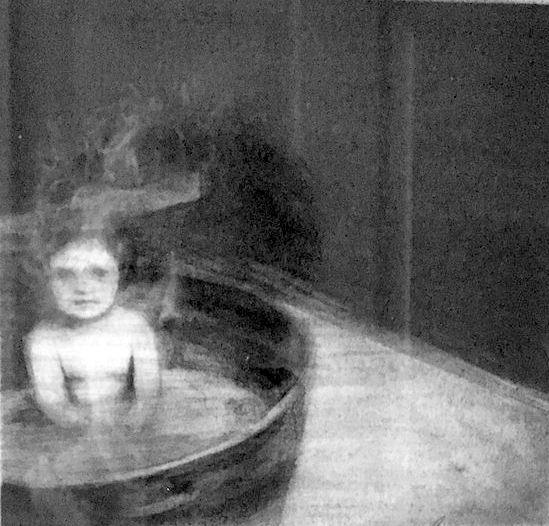 This is such an interesting image. One of the girls I gave some of my own artwork to at the craft shop rather than take it back home gave me small framed work of her own as a gift the other day. It is graphite and charcoal.  Off to the side a little girl sits in a tub of water. I think she is me. I was bathed in a galvanized tub like this when I was about her age. She stares out at the viewer and waits for someone to come back and take care of her.

Actually I just love this image. The fact that it is tones of grey and a bit blurry make it all the more mysterious. I like how she looks capable of handling her needs all by herself if someone would just give her the soap, cloth and towel. She just sits there waiting with almost the enigmatic smile of Mona Lisa.

When I photographed it to write about I noticed that my own image is superimposed over the little girl. So now I love the photo even as much as the artwork. She hangs in the hall filling a space that always bothered me between two composite drawings I did of Lee and I….our life in all the parts of importance at the time…..maybe ten years ago. 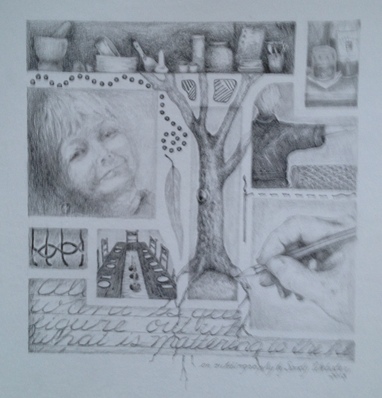 I chose to draw pictures of all the things we felt were important to our identity at the time. Here I am with all the steps of making earth pigment paints, my favorite scotch and glass that Lee made me from a wine bottle, my tai chi and yoga practice, trees, the influences of Australia, weaving, actually twining with an emphasis on shaped first letters of my family’s names, dinner parties, writing, drawing. 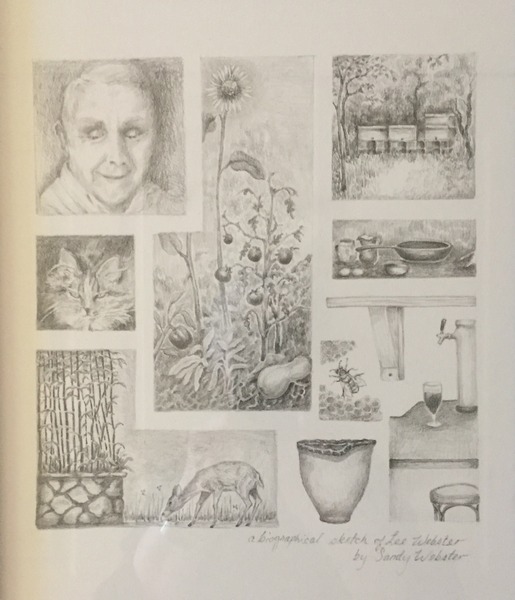 These were fun to do. A way of saying, “Here we are!” Now they say to me, “There we were.” And aren’t we lucky to have done so much, so many things that have brought us so much joy. We still have many jars of his honey stashed in the storage room that I kept forgetting to give away. The art group was the main recipient of that honey and now even they have gone….but leaving some very good memories behind.

And as to the kind letters. My Australian friends have been so wonderful taking the time to keep in touch and lift me up with kindness. I will remember their words when I next have to heft a battery charger, clean out a scuzzy pond filter, retrace Lee’s steps to find a tool or his sunglasses. Their words come at an especially needed time as so many of us have had to say goodbye to a long time friend down under.

And the emails from friends here in the States who say they think I am doing a good job dealing with the changes that Lee and I are going through. Thank you.

And Adele is right, it is hard being “it” when there is no one else to talk to.

So I just talk here. Kind people are listening.

Now back to Lee who is short of weeder eater cord by now….and a cleaned studio waiting for that collograph plate to be put together.

Til later when I have something to show for those efforts. 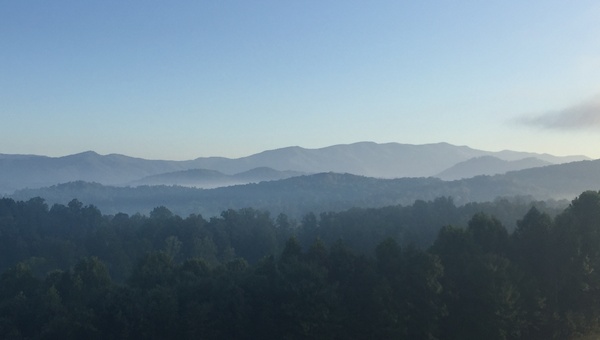 This morning on our walk at the dam. I love the subtle shades of blue as the hills recede. Here are just a few more pictures from our walk there the past couple of weeks. 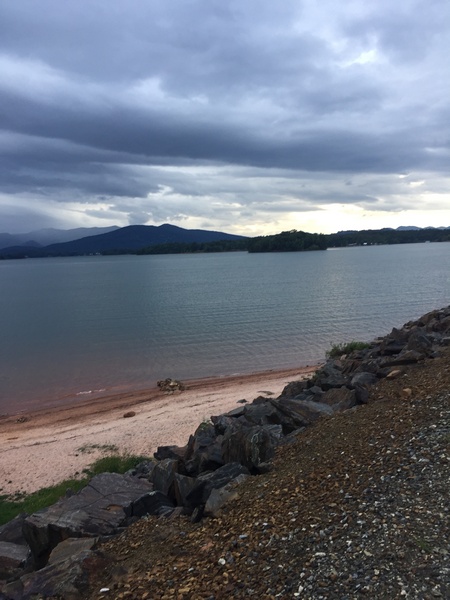 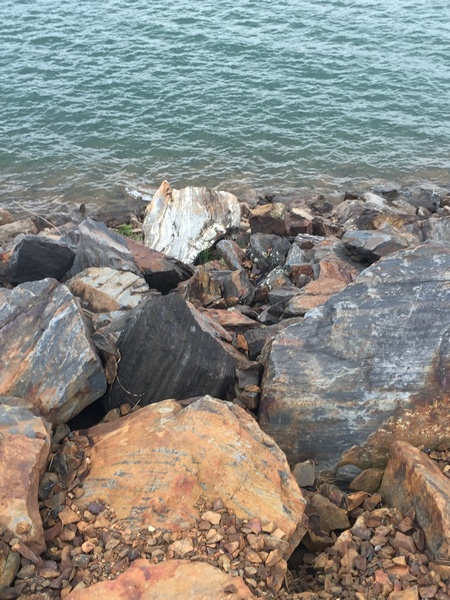 I love the color of the boulders supporting the dam. 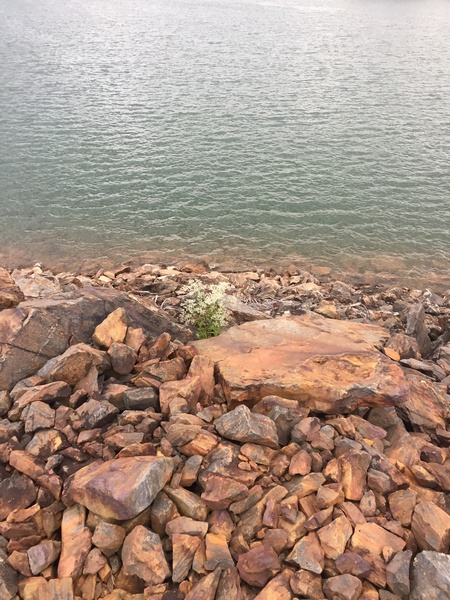 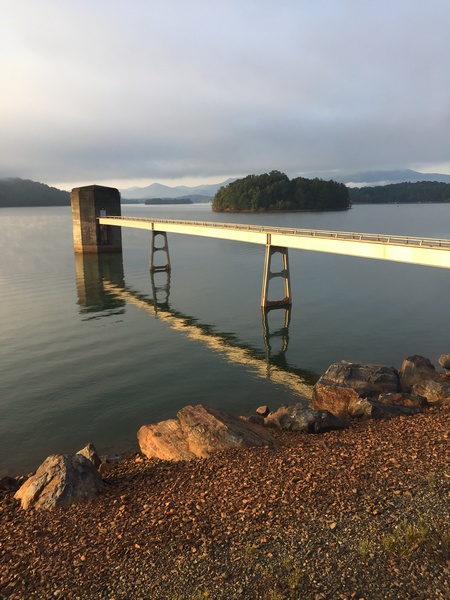 And the grasses along the paved walkway. 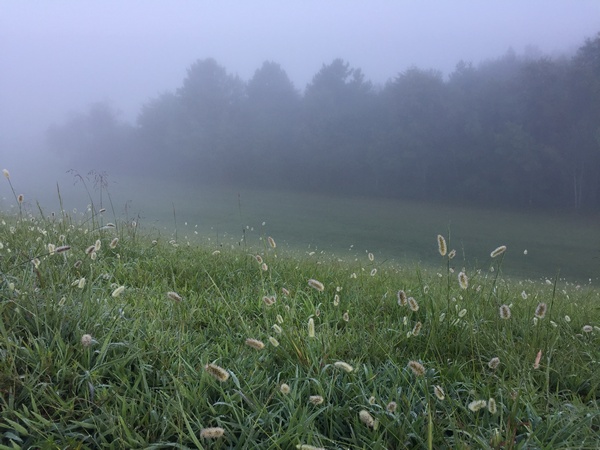 And these that we collected some of last year that were dried out so I could use them to make “trees” in collographs. 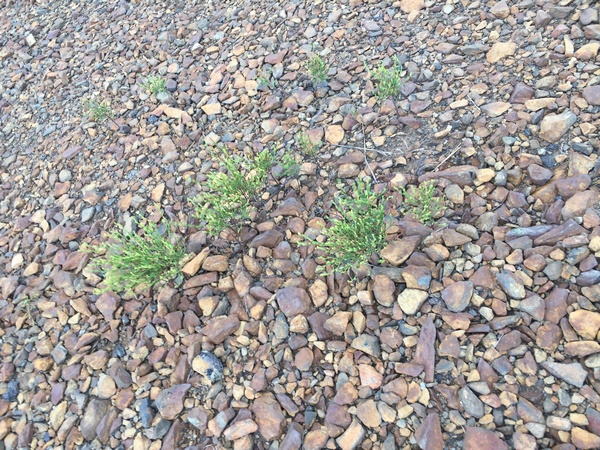 Lee is having a nap now so I can have time to write this blog. This morning we spread twenty bags of mulch…and I still need more. He did some weeder eating. I learned how to start his truck that the battery had run down on. I knew I should have been starting it every so often once it was removed from the garage, parked by the shed with a brand new battery, but I didn’t. Frankly I just did not want to add one more thing to the list. But I learned how to open the hood, find the battery, connect the right clips, find an extension cord, plug it all in, wait, start the truck, run it forward and then backward, park it again, put all the equipment away. The battery charger is heavy and I really hate having to learn how to do all these things….all these things that before his dementia I just had to ask Lee to take care of. Yesterday I had to locate the window washer fluid holder under my own hood and fill it up. So many things I never had to do before. It has been a tough realization that there is no one else but me. The magic fix it, how can I help man, is simply not coming by.

I will just add it to the rest of new things to look after. I will add it to changing the filter on the fish pond, refilling the fish pond, recharging the yard tool batteries, locating wherever he put the tools when he got tired. It is not an endless list but it constantly grows and I marvel that I can fit it all in and still get a good nights sleep and some of my own work done.

For those who did not see the posting on facebook here is the finished shirt. I wore it to the brewery yesterday for our weekly lunch out. 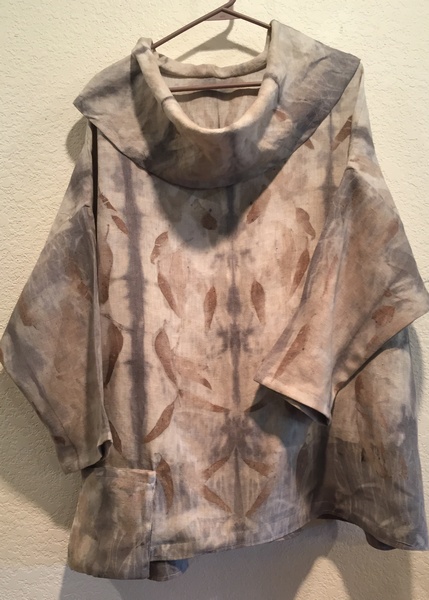 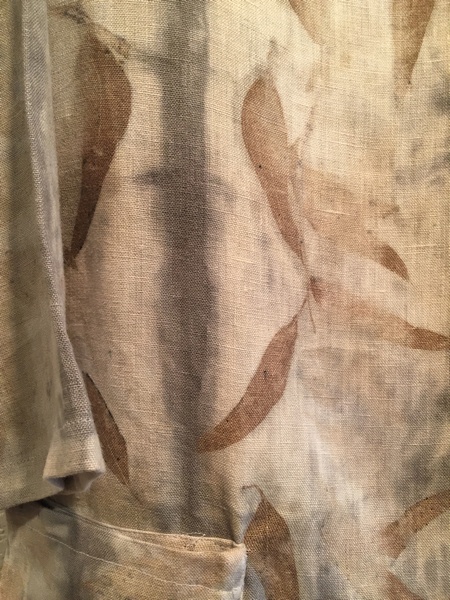 I am not doing a lot in the studio but would like to try some more collographs next week. For now I need to clear the space of all the sewing things. Then I can start something new. And I have convinced myself that I can drop what I am doing, even covered with ink, and go start up the weeder eater or pull out more cord or go get the other charged battery without getting upset. It is a waste of time and energy to get bothered about helping Lee. It is also pretty darn selfish. I am the only one there is to help him right now and he is so pleased to get the small chore he has set for himself finished or at least part way finished. Every day he looks forward to “getting back at it”. He just needs a bit of help.

And I might even be having a student in the studio learning white line printmaking soon. He has been with me before and understands the limited time I might have but seems so pleased to be able to learn the technique. And I am really happy to have someone to pass on one of my favorite ways of making prints. I miss teaching.

Not much else going on. I bought two bottles of single malt scotch yesterday in case a fellow scotch person just happens by. But I doubt that will happen. So I will have plenty for later when the holidays come round. And there is always the every few weeks “scotch talk”  over the phone with my son. Sometimes just saying things out loud makes them disappear.

So til later when I might have a few new prints to show. 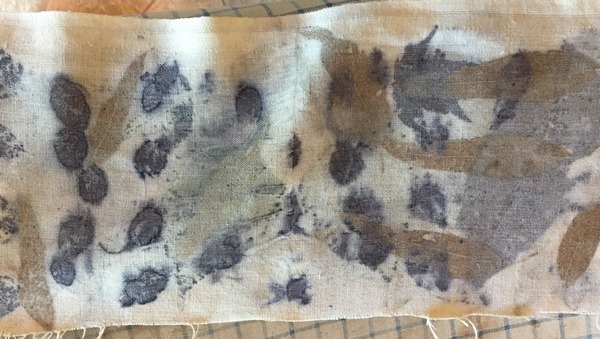 I looked at the linen cloth that was left after sewing this past week and decided there was enough white linen to try contact printing the pattern pieces for the cowl neck shirt. Since I planted some small leaved Eucalyptus trees last fall, I decided to try some of those leaves. They are the small ones on this test cloth. The large one on the left is from the walnut tree. There was a Japanese maple leaf in there as well. I dipped them all in an iron bath before putting them onto the dry linen. And because there were some Eucalyptus leaves left from two years ago when a friend had some sent from California, I stuck those on as well.

Those leaves from California were completely dried out but I liked the color. I did not like the purply tone of the other leaves….probably too much iron in the bath dip. 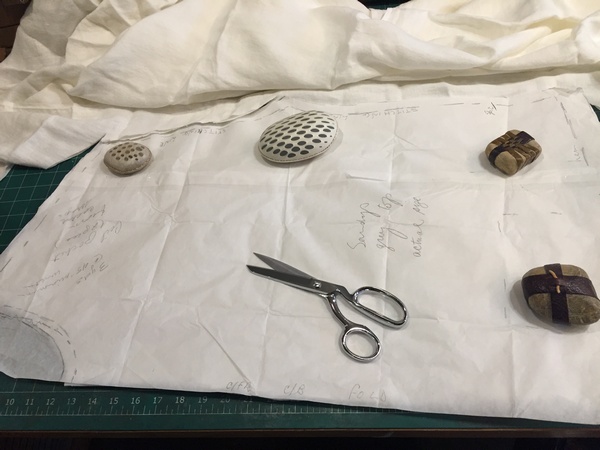 So I decided to try it on the pattern pieces with some adjustments in the bath and steaming. (I love using my hide covered rocks to hold pattern pieces in place.)

Here are the pieces after wrapping them dry around small PVC pipe and tying with cotton string as tight as I could get them. They were then dipped only on their ends into the heavy iron bath from before. Then steamed for a bit over an hour.  They looked like they had too much pale rust color showing so I decided to put several large black tea bags in the water and then just lower them all in that for an overnight soak.

This morning I unwrapped them and gave them a rinse in a solution of dirty iron water with black tea water and vinegar. Here they are wrung out and drying until I can wash lightly, dry and iron before sewing them into the shirt. 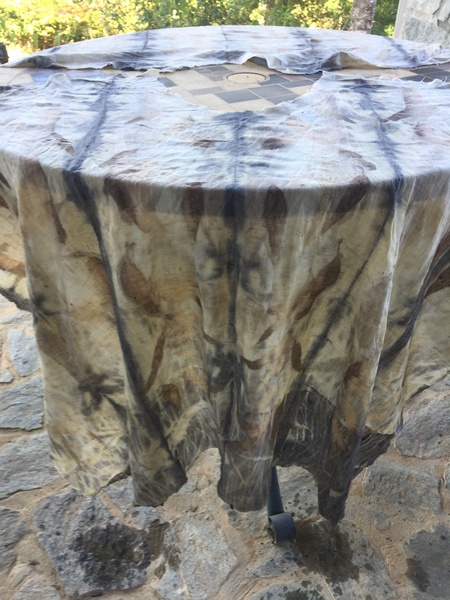 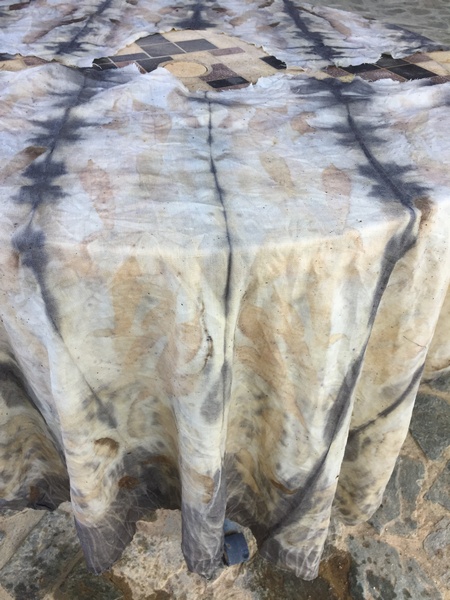 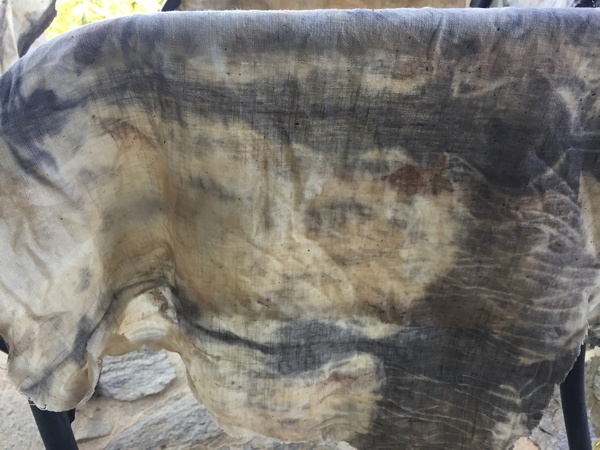 The back did not pick up the Eucalyptus leaves from California as well as the front. But I like it overall. The nice grey is from the black tea overnight bath and the beige is not as pinkish.

I will show it finished after the sewing.

The linen is lovely and comes from the online store, FabricStore.com.