I met Lin in a workshop I was teaching in 2008 titled, Book, Basket, Box: Placement for Memory. She was building a place for the recollections of a deeply religious upbringing. Both parents were gone and Lin wanted to build objects and images to hold the power of how they shaped her faith and religious beliefs. As Lin put it, “God was always at our table.”

I never went to church as a weekly practice, but I did know some Bible stories from early days at Sunday school. Lin knew all of those and more.

In her house the Old Testament was kept handy and referred to often. She loved the security of pious, good parents and told us many funny and loving stories of her childhood. Lin was an excellent story teller and when she would put her words on paper in cards to Lee and I after staying for a few days, we would read them over and over and laugh.

We got on well in that first workshop and Lin would return for other ones. But the best of times were when she came to my studio for private time, often with another student she met in that earlier class. They stayed in the apartment and had all their meals with Lee and me. He did most of the cooking because I stayed in the studio or took off with them to find just the right piece for Lin’s work in country flea markets.

Her goal was to continue with work based on Old Testament stories. She did not talk about having an exhibition of the work. Lin thought that the sculptures would be misinterpreted as a negative on being raised in a highly religious home. And she knew that in the South the work could be seen as blasphemous. I wanted her to push for exhibition outside of the South but she had little interest in doing that. Over the many years of her doing the work here in my studio I took pictures as best I could, just to have a record of the work. And when she left for home all the pieces were carefully packed into boxes…..mostly not to unpacked again.

I keep this picture of Lin working in my studio as a reminder of her dedication to her art about the faith she was raised with, up until her death a few years ago. 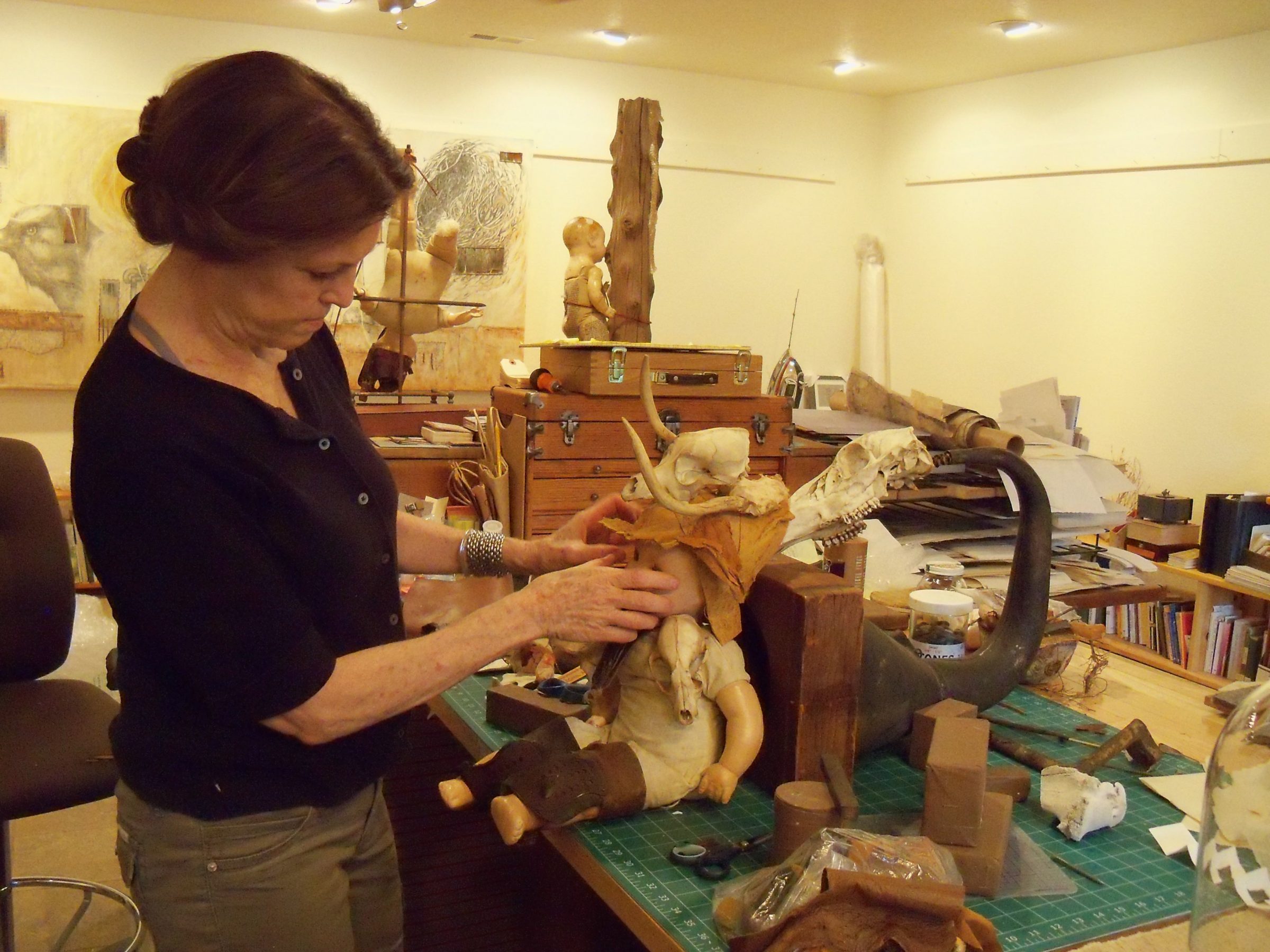 Her primary medium for showing the stories of her childhood were old composition dolls. When she arrived on Sunday her car was loaded with these dolls, piles of rusty things, old foundry molds, skeletal remains, hides, old bibles, tools, paints…..there was no surface not filled with the things she might need to make her sculptures.

The fearful stories of a vengeful God in the old testament were somehow softened by the use of dolls a little girl would have played with. Because of the age and sorry shape of some of the dolls she either brought with her or we would find at antique shops, they were sometimes creepy to say the least.  And really fit the part they were portraying in Lin’s story telling.

I took pictures of all of the pieces. She only worked on them here and I would move all my own work out of the way to make room for the complexities of assembling parts.

Eve in The Garden of Eden

And a view of the back with rib bone. 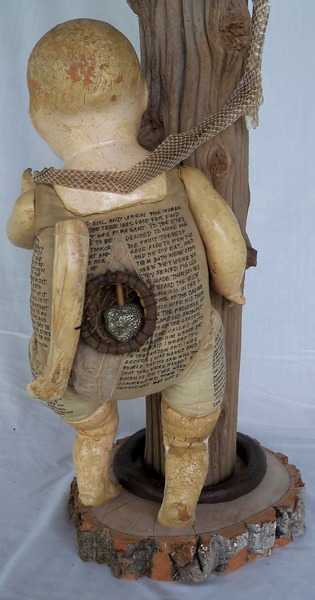 Every single doll needed to have these muslin torsos where each evening when Lin went back to the apartment after dinner, she would write the entire story from her bibles. 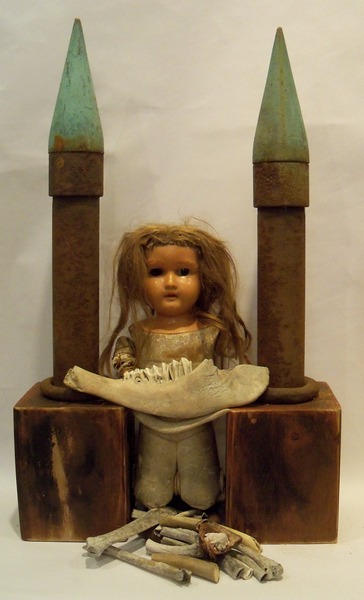 Samson before the writing. We looked hard to find a doll that could pass as a male figure in the stories. 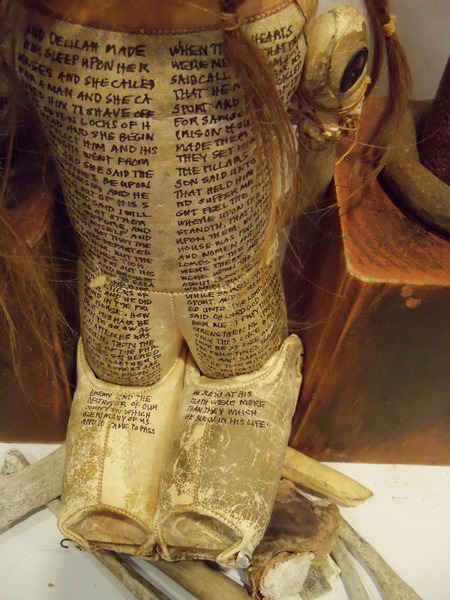 And the words added.

Jonah and the Whale was a tour d’force. Made from an antique doll buggy with foundry mold and horns for the tail emerging from the water. 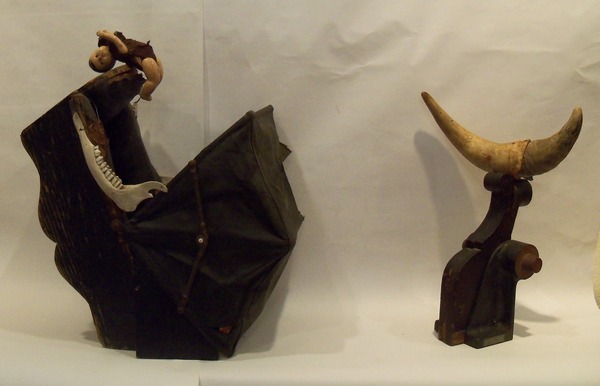 This is the first one she did in the studio and remains my favorite because of the sweetness of the face on the child being warned of what will happen to their body if they don’t obey.

I also loved that Lin found a doll that had a white child’s face but the rubber arms and leg turned a dark brown. This one really fit the story perfectly.

The story here is written on the large cast paper shell below Moses and the turtle shell. Those “bullrush” leaves were unused golf club handle wraps. (She could find the best stuff).

Somewhere there was a story about God and a Wounded Man. 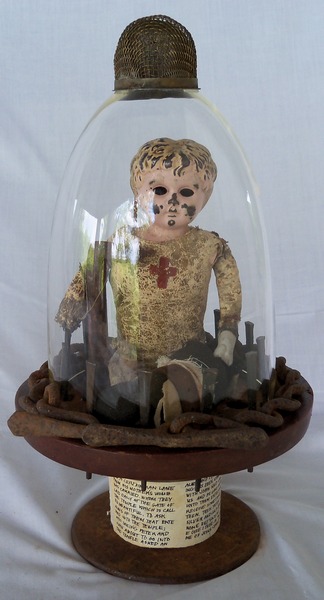 And the start of Lott’s Wife. It took some maneuvering to get her to look back at the attached salt pillar. I don’t think this one was ever finished…but a great start. 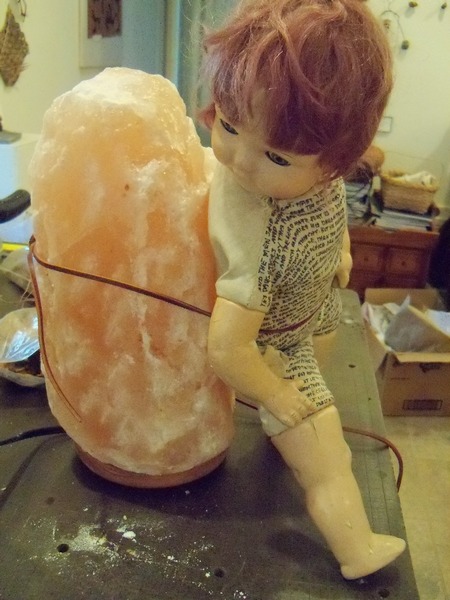 And another story of what God would take away if….. 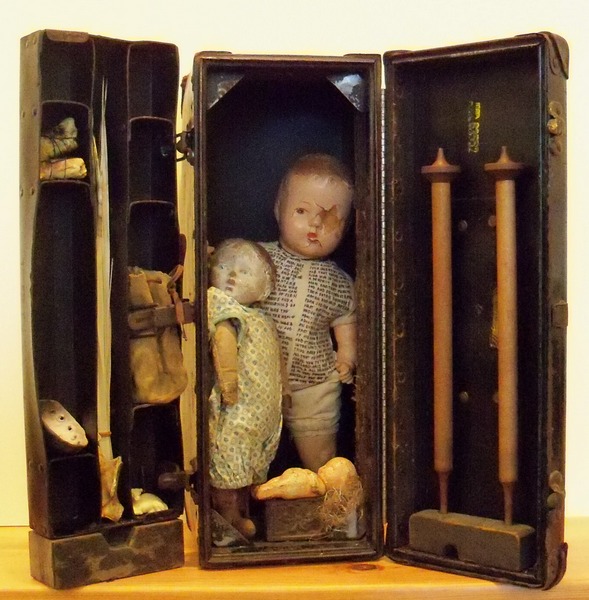 The story of Passover really came to life when Lin found the exact same doll she had as a child to play the part and we talked an old man who owned a leather shop out of his prized goat mask. The bed for this child is an old rusty tool box we found at our favorite shop where the owner would look at what we piled up and toss a price out there….we always agreed to whatever he wanted for his junk.

And another favorite because Lee was always handy to make some parts…in this case the coffin for the one left behind…”two women were working in the field, one was chosen and the other left behind.” 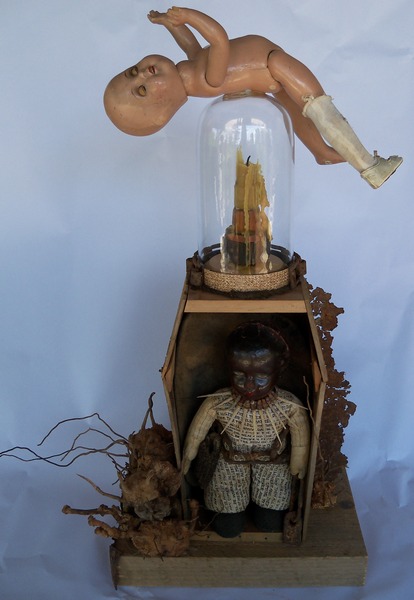 I like how the chosen one got lifted to Heaven so fast she lost her shoe and sock.

And Lin wanted to use some of her dolls to address the child’s nightly prayer…”If I should die before I wake….”

We got her soul to rise by making a transparency to attach to the arch. The little dark girl in the last bed is glancing over in disbelief. The beds are all assembled foundry molds and rusty rings for headboards. I really liked the little girl still saying her prayers.

This one on baptizing children at home was also a very good one. 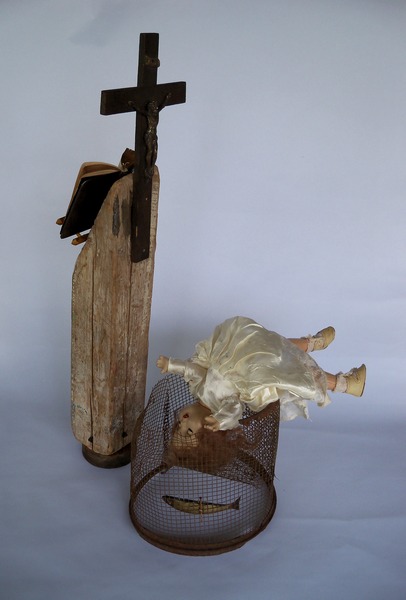 A curved fishing lure that fit the curve of the wire fishing bucket, the boat buoy with a small bible opened to the page for instruction, her Sunday best dress and head tilted back…. 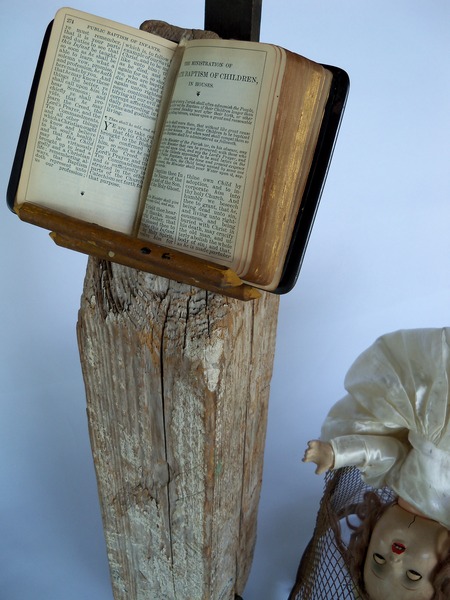 When Lin and I were at the favorite junk shop she looked into a bucket of rusty nails and saw The Sacred Heart. She gladly paid what he wanted for the rusty strings wrapped around a nail.

Several of Lin’s pieces were about the futility of war. 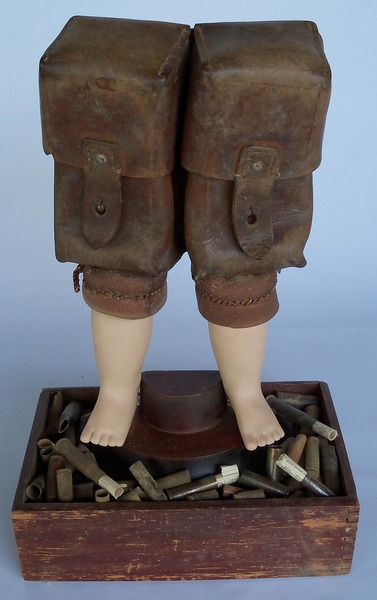 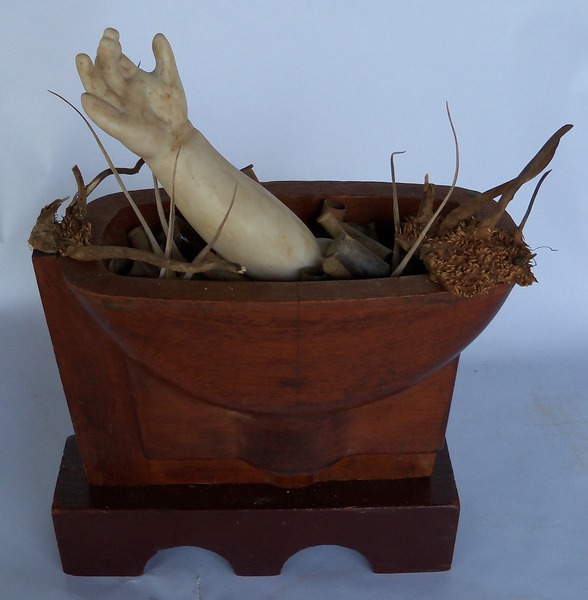 The sadness of war. Lin went on to do many more like this. 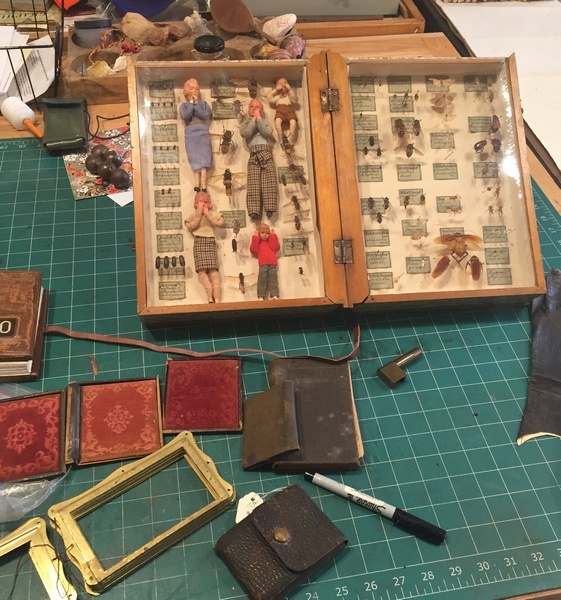 She sometimes used her own family in pieces like this Specimen Family.

I miss having her things strewn around all my available space. I miss her. 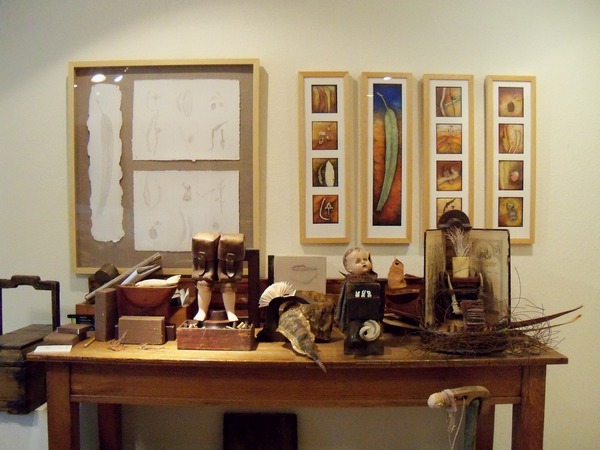 I miss being in the company of artists who work this hard for no other reason than they have something to say…and it never really mattered who was listening.

After Lin passed away I wrote her husband to not feel bad if he just took all those dozens of boxes to the dump. It was okay. Lin’s joy was in the connections each piece brought her to the memory of loving parents with a solid faith.

I also told him to not even think about loading them all up and bringing them to me.

What I showed here is a fraction of the pieces she made. The photos are as good as I could get them at the time.