Yesterday I put down ten of the fifty bales of pine straw….then quit. I was going to go back at it this morning but it was too cold. Two hundred bags of pine bark mulch was delivered at the same time as the pine straw and all that was placed next to where they were digging up some pipes near the well that quit giving water the other day. All fine now.

So because it was a bit chilly to be outside this morning I decided to iron, grind coffee beans for the week, make up a meatloaf for day after tomorrow and put together my favorite tomato soup. This was all done before eleven this morning. When finished with everything including the clean up I treated myself to a coffee with half and half and one of these charming French sugar cubes my daughter gave me for Christmas. 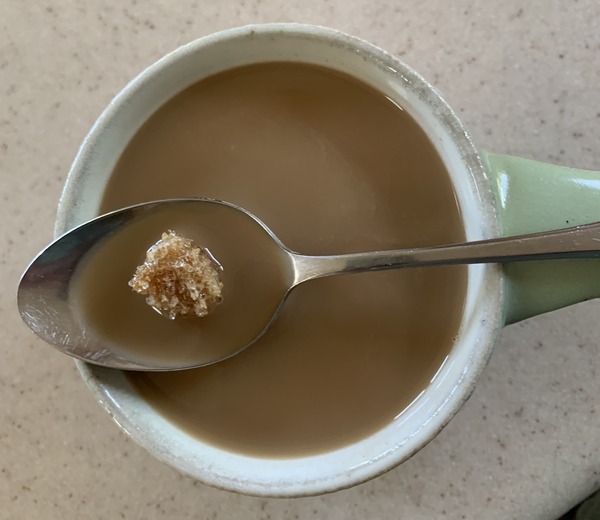 So now I am going to give you the recipe for a very, very good tomato soup. I found this in an Asheville magazine called Plough to Pantry. I don’t think they are in business anymore…sadly.

This is their Tomato Bisque.

Note: I keep cut up cooked bacon in the freezer in a zip lock bag to use as needed. In this case I remove a handful for the soup. So I just have to add about a tablespoon of bacon fat with my butter to the pan, and add the onion, carrot and celery plus the garlic.

Here is a bit of useful information: If it was just onion, celery and carrot, it would be what the French call a “mirepoix”, when you add the garlic it is then something that would be called an Italian mirepoix. I found that interesting and learned it from a local chef giving cooking lessons.

If you are cooking bacon from scratch, cook til done and drain, leaving a bit of grease behind to join the butter and vegetables. 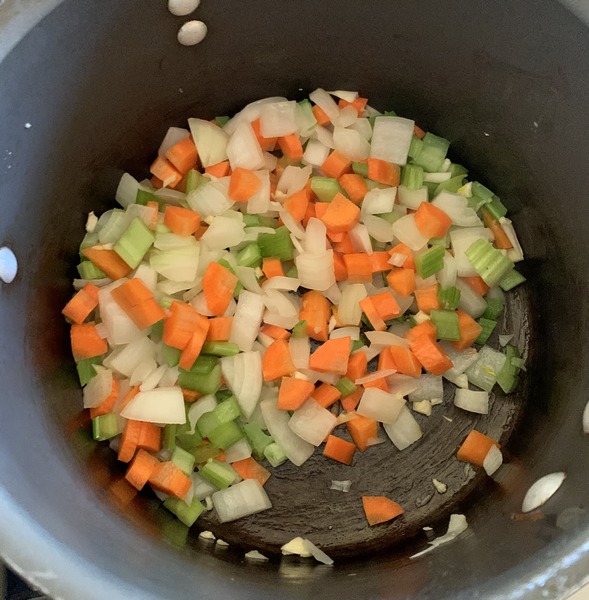 Cook that for about 8 to 10 minutes and then stir in the flour to coat. 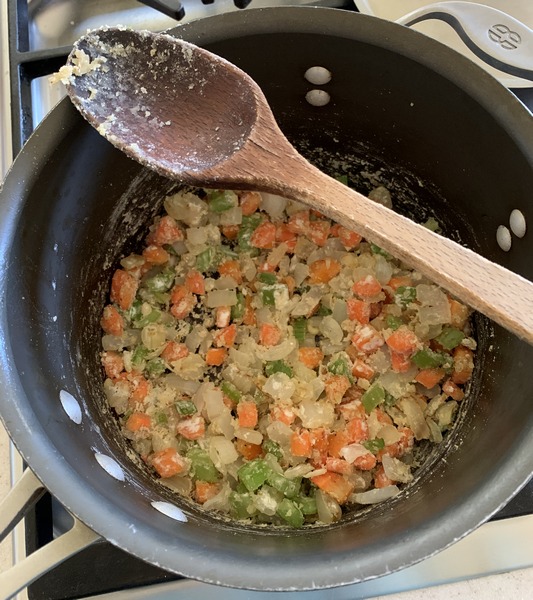 Notice my old wooden soup spoon here? I knew someone that felt it was necessary to replace wooden spoons long before they got this ratty looking. I feel that each pot of soup gains some sort of information from the previous soups so would never dream of replacing this old favorite.

Now add those tomatoes and here is where I differ a bit. I add the entire six cups of chicken broth from the carton….why bother to put just a cup in the refrigerator waiting for a better purpose than this soup? Mine also is not sodium free. Give this a good stir and bring to a boil. I add the salt at this point.

While waiting for it to boil you can tie up those herbs but I find a better way is to just pop some in a tea bag for loose teas and then tie it off so you can fish it out of the pan. 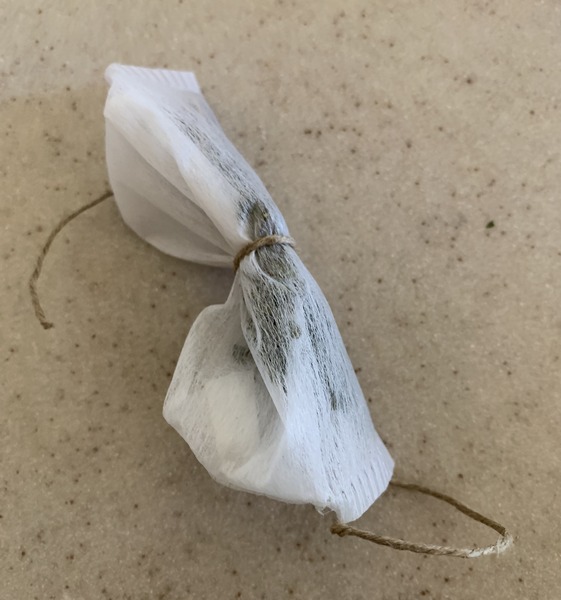 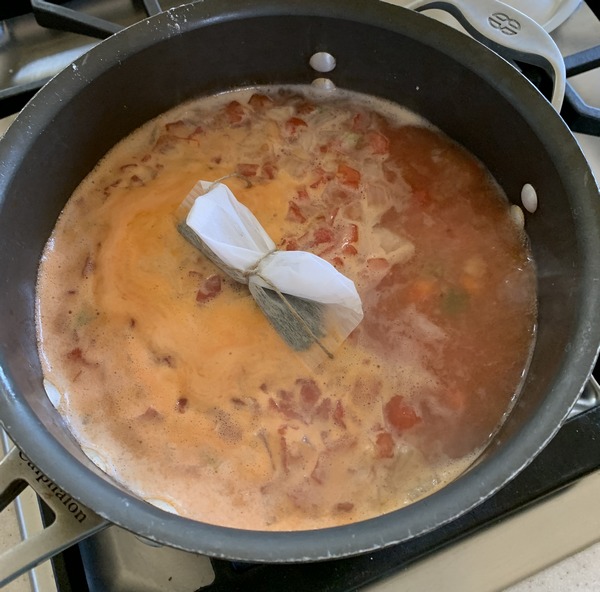 Then simmer 30 minutes with the herb package. The recipe never said whether to cover or not. I prefer to cover for the 30 minutes because I do not want to see any of this soup evaporate into thin air.

When the 30 minutes is up remove the herbs and use your mixing wand to pulverize everything. Finally stir in the half and half (I use fat-free) and the bacon bits that you should have chopped up after it cooled and drained. Pepper to taste. 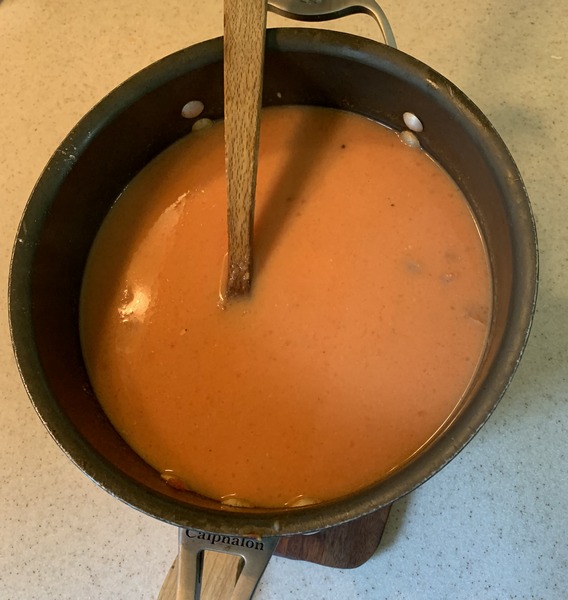 This is very good. We had it for lunch and have enough left for two more meals waiting in the refrigerator. You can also freeze the soup for much later.

Now in making my meatloaf, I keep it super simple. About a pound of ground beef (whatever you can get from the store during these times of not much available) gets put in a bowl with one regular can of diced tomatoes and one egg. Before I mix that together I add a bunch of saltines, maybe fifteen squares, that have been crushed in a plastic bag by a rolling pin.

Because there were very few boxes of Lee’s favorite saltines in the store last time, I used a bit of oatmeal to make up for the juicy canned tomatoes that I did not drain….this is making sure he has enough crackers for his soup.

Add some salt and pepper, settle it all into a loaf pan, cover and refrigerate til later. I can get two meals out of this with just enough left for the coveted cold meatloaf sandwich with catsup. Tomorrow we will have it with roasted vegetables. Old habits of how I was raised to cook on the “cheap” have kicked in with this new way of shopping and not getting all you want while trying to not waste one little thing in the refrigerator.

Also I am keeping up with the drawings a day. 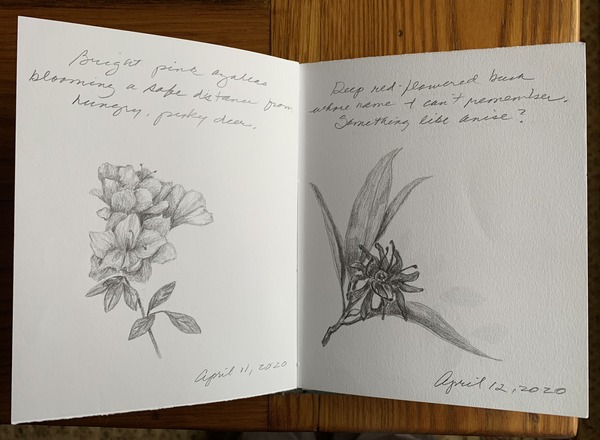 blooming a safe distance from

whose name I can’t remember – 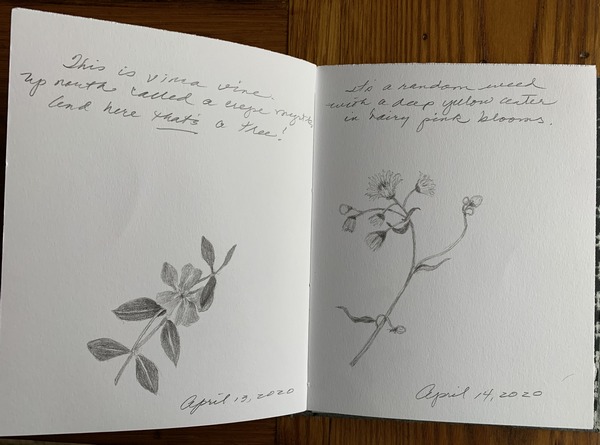 This is vinca vine.

Up north called a crepe myrtle.

And here that’s a tree!

with a deep yellow center

And the latest pages in the six way wildflower book. 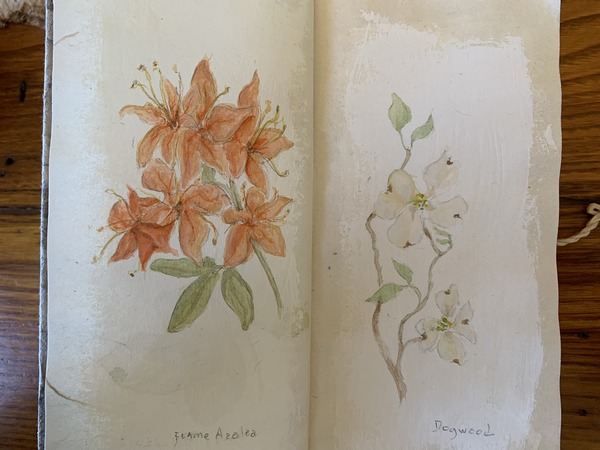 Now because I have less than three hours left of private time while Lee’s minder is with him I am going over to the studio and work out how to do a book centered around a writing I did last week. I want some movable parts with some layers. Since the poem will only appear in the back and down the page, I am thinking of a door that opens then a peek through a window where the poem is visible. I am obviously still avoiding cutting those bush book pages…..