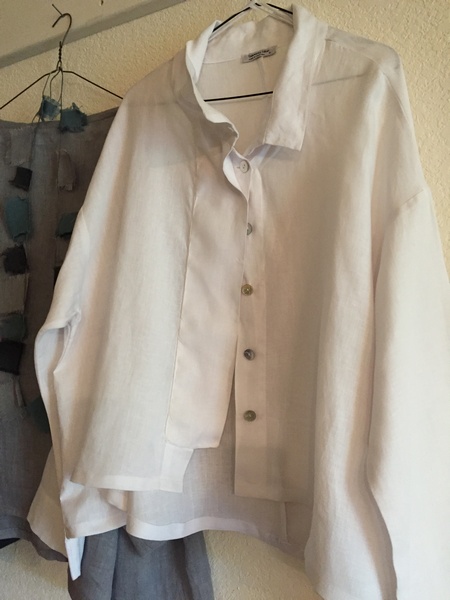 The past several days I have been altering the clothes I bought from Havana Blue in Melbourne, Australia. Mostly I don’t try things on…..just see if they are on sale and if the size looks right. And because I follow Havana Blue on Facebook just to see the cut of the clothes, I wanted to get to the shop while there. Then of course buy whatever would haunt me later if I didn’t buy it.

This white shirt was actually some kind of soft linen coat. I looked like a walking duvet cover when I put it on at home. At least one third of it is now in the “spare cloth” bin. Next I went to the pants that this was bought to go with. A navy blue or cobalt, not sure which because I only wear pale blues. They were quite roomy due to not only the cut but the rectangular opening in the side front. I closed that over and took further tucks on the inseam hem. 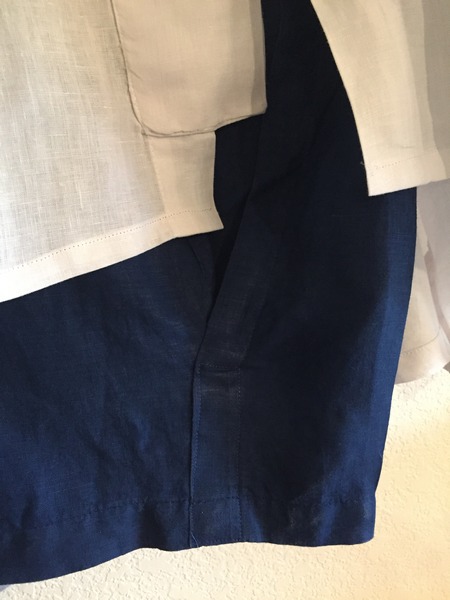 Next was another over-sized top from the same shop. I have to say here that the younger, very pretty woman who was showing me things in the shop, looked also like she was packing on some more than necessary pounds but managed to look very stunning in a blue pants, top and duster. I tried to talk her into just going into the changing room, putting something else on and letting me buy what she was wearing. She wouldn’t. But after a quick and yet discreet look at my body, she started pulling things off the rack.

The kind friend, Barbara, who took me to the shop was, as most Australian women are, kind. There were no comments like, “Sandy, you do not want to wear that.” Those comments are more like what I would hear here in the states, either verbally or with a look, or a decided shake of the head. So thank you, Barbara for your kindness and the opportunity to remake what looked like a good idea at the time. 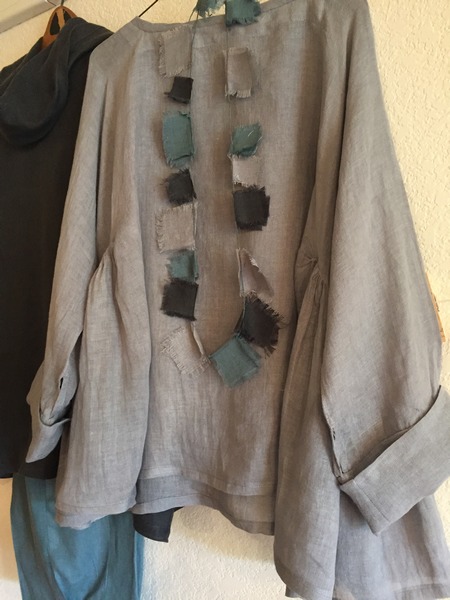 And again, about one third is in the bin with the white linen. The necklace with this was inspired by my looking down at the floor and seeing all the small scraps from sewing the past several days. Unfortunately I spent two days thinking it was a good idea to stitch on all the squares…kantha stitches, and when I finished it was way too much….totally “goobered” as one might say. So I made another one  because there are so many scraps. I used a stiffening iron-on something papery and than hand stitched them closed around the linen like cord with matching sewing threads. 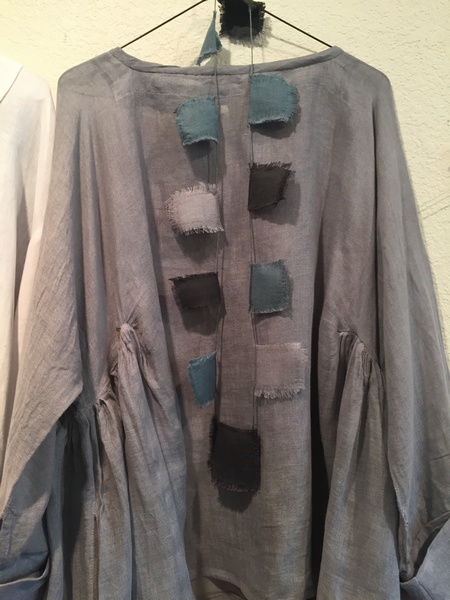 I like the softness of it and the practicality as it might just cover whatever I have spilt down my front. Here it is with the dark grey top. 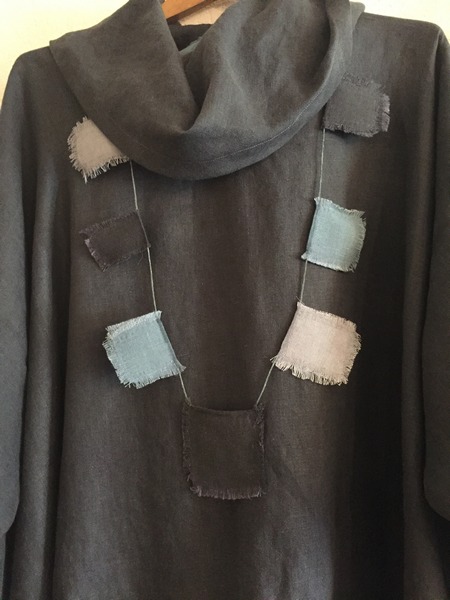 And finally here is the label inside the Havana Blue clothing. 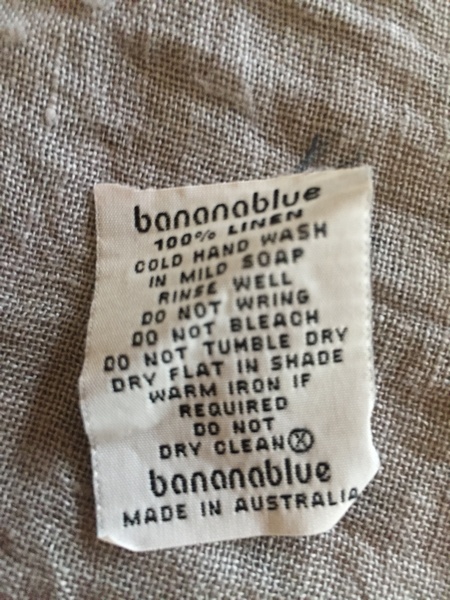 Of course I am supposed to wash it in cold water, dry flat, not wring it out….maybe I can just hose them off in the yard with a bit of dish detergent. Then a day later when they are dry go ahead and fish them out from under a tree, peel off the bird mess and then press with a warm iron.

And don’t you just love how it says bananablue. Now was this really made there in Australia, where the lovely women told me, “Right here in Melbourne” or somewhere where they had a hard time doing the translation of Havana Blue.

Regardless, I would not trade that experience of being there and buying these clothes for anything. She even managed to sell me a great linen scarf to “tie it all together.” It is a very usable white with lots of splotches of different blues on it. Lovely.

What is left to sew on is hemming a black pair of pants from a shop in Asheville….then I quit for now. What I have to get rid of are some blouses that never will fit and I never liked that I got on sale, therefore had to buy them. Those and two pairs of rayon slacks that for five years I have meant to hem but the pesky buttons up the sides seemed more trouble than it was worth. I have a taller friend who will get the lot later this week.

So that is it for now. End of sewing stories unless something spectacular happens.

PS In the meantime I am staying out of shops.