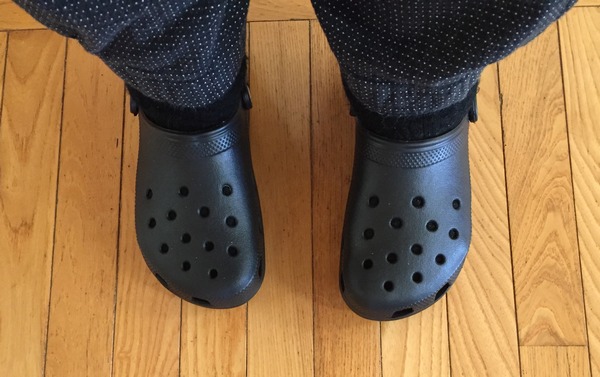 My new Crocs, the only shoes that fit right now but at least both feet are level with each other!

I can now take the stairs one step at a time with one foot on each tread…going down as well as up. Each weekday this week I have been in the gym working on the recumbent bike for one half hour and then doing some upper body work and boxing…..all finished by 6:30 am. It feels good to be back there.

And it feels good to be in the studio. I am using years of sketchbooks to harvest the things that I thought were important during my time there to use in the tiny books of sketches. It is so much fun to go though them and pick images of the little things. Here are some of the covers. 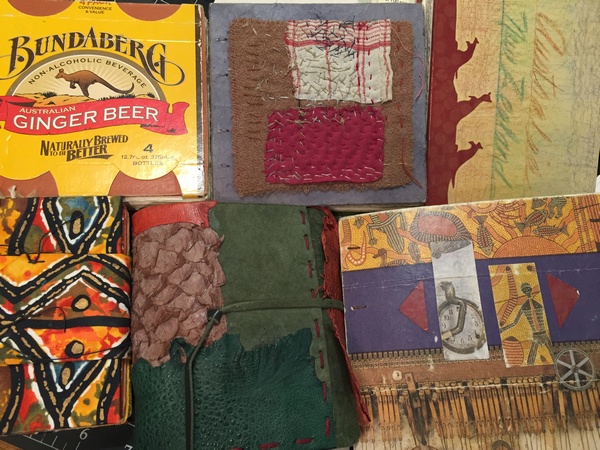 You see that one in the lower left? I made that for one my early trips down under to a basket conference in Tasmania. I bought that fabric because I thought it looked Australian. They did not think it did that much. Funny how we have preconceived notions of what looks just perfect. And I still think it does….mainly because of the colors but the pathway markings as well.

Here are more of those books opened up to show the things I was drawing. 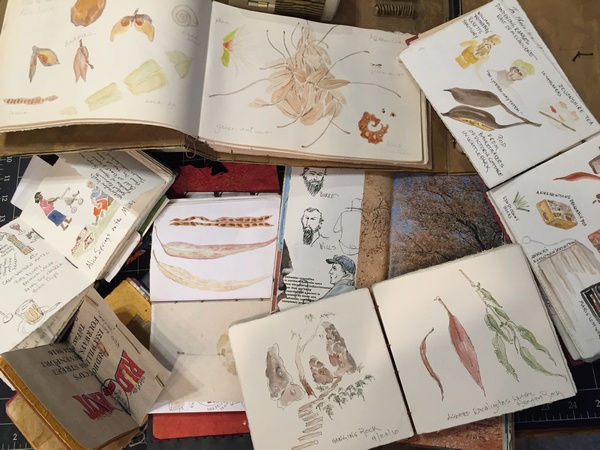 I love that ant nest made up of leaves and the fierce green bottomed ants that made it. That was on the Katherine pages from quite a while ago. There is a William Ricketts page in the upper right. He was a strange one. Here is a picture of the sculpture I like the most of his. I call it Ricketts as Kangaroo. This one is at Pichi Richi in Alice Springs but my sketches in the book here are from his place in the Dandenongs near Melbourne. There are more sketches of Eucalyptus leaves than anything. Such great colors and forms.

Some of the books have quite a bit of writing in them and I got sidetracked reading the thoughts I had at the time. But so far there are six of the fourteen small books finished. When I get them all finished I will figure out how to put them in a container with the pigments coptic bound pages book. And maybe, just maybe it will be the last piece of work about Australia that I do. Hard to say that with so many of the watercolors left unused, but we will see what happens.

My trip for 2019 is pretty much all set now. My rides to various places are set on friends’schedules. Just flight and hotel arrangements to go. Hopefully the classes fill and then I can think about what to pack for students.

And just about an hour ago a South Australian newspaper insert magazine arrived with this picture in it. 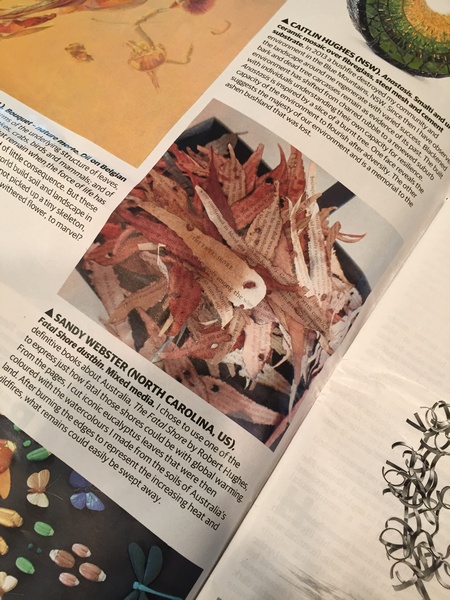 These were several of the pieces on exhibit for the Waterhouse Art and Science Exhibition at the South Australian Museum. Thank you Madeleine, that was very thoughtful to send it to me. The awards went to well-deserving pieces…..some very complex.

There is not much else going on here. Art Group met last Sunday. We are such a diverse group of artists. It is always inspiring to see what they are thinking about and how that manifests itself in the work.

I am going to do some sewing next week. Lovely linen shirt fabric is on the way and I am figuring out how to sew that utility zippered carryall for tools. It will be a Chinese puzzle to figure it all out but I feel the urge to just sew something.