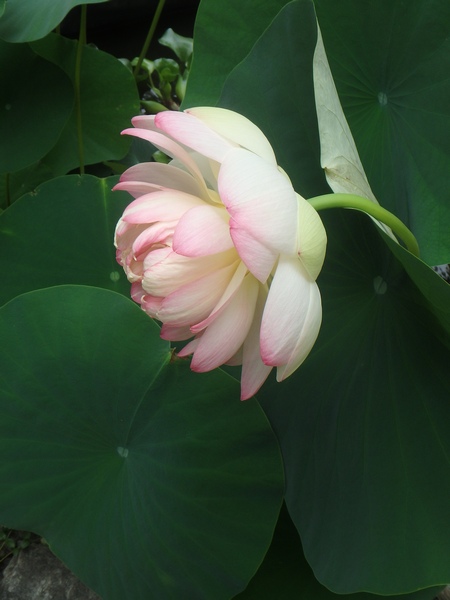 This is my only bloom so far in the pond. The lotus flowers are so large and they are perched on long stems that wave around. The rain took this one over to the side so I brought it inside. 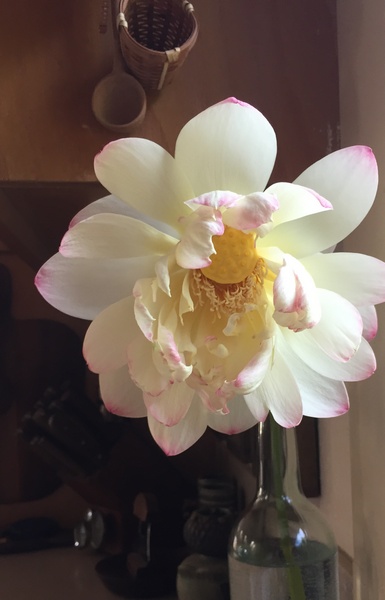 Within a few days the petals dropped off and left this. 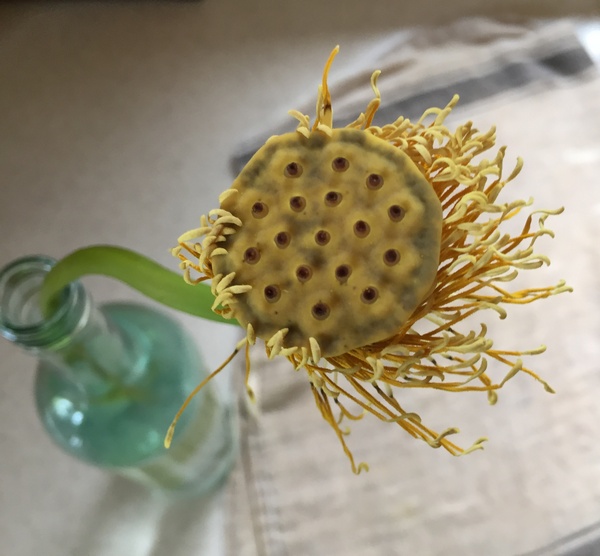 Even though it is in a wine bottle full of water I don’t think the pod will grow bigger.  But I love the way it looks….those tiny little seed holes and the brown color emerging through the canary yellow, and those creepy little extensions gripping the base. It will stay in the water until it finishes whatever it is doing.

I will say one thing. As soon as the petals dropped the pod turned upward. It must have gone to that effort for some reason. In the meantime we keep checking the pond to see if another appears.

Yesterday Lee asked if he could help me do some yard work. I now do the weeder eating as he has trouble figuring out how to hold the tool. Anyway before I go off to cut down weeds in the wilder sections of the yard I show him a weed that is popping up every so often in the pine needles in the front yard. I said, “Pull these all up.”

He did in one section and while I was dragging down branches to cut off of the paper birch he was dutifully pulling up the ground covers. So I said I would take care of that and he could drag all the branches I had cut down away to drop off the bank. Because he was focused on putting his “weeds” into a bucket, he then started to strip the branches of leaves to put in the bucket with them.

So I said, “Let’s just do this job together.”

Today I wanted to make him his favorite German potato salad for dinner tonight. He wanted to help. So I asked him to chop the onion and the celery. I learned months ago that you have to cut a sample of what he is to do first and set it in plain sight. But I had to stop him from mincing them into oblivion. Some things stick and some things don’t. I do notice that the things that stick have a limited time and then something else takes over….older memories of how to do something kicks in and the bottom line is, just keep constant watch.

I got away down here to the office to write this because I turn on a cop/crime show that he will watch for a bit and then because it is after lunch, he will likely take a nap in his chair.

But he can’t nap too long because then he awakes at 2:30 in the morning ready to get the day started. It’s a delicate balance.

Today while walking the dam we followed an elderly gentleman with a cane. His partner had country gospel music playing on her Iphone to help them both keep up a pace of ambling.

I am hoping we are not headed that way. I can’t do the gospel bit….Bob Seger, Bruce Springsteen would be better.

And speaking of gospel, every morning before I head off to the gym and have laid out his underwear for after his shower, I change the channel from what was crime stories the night before but in early morning turns into those preachers asking for $1000 “seed money”. Do people really give them money? I like one in particular. He is the one with the dyed brown hair, some facial hair and a lascivious grin that really appeals to the blondes in the audience. Is the “seed money” to keep those women grinning back at him?

After sewing on the patches of cloth to prints I decided to check out the drawers of prints that did not sell or were artist proofs. I selected five and brought them upstairs to work on. Within two afternoons I had them all stitched up.

Here are the first two. 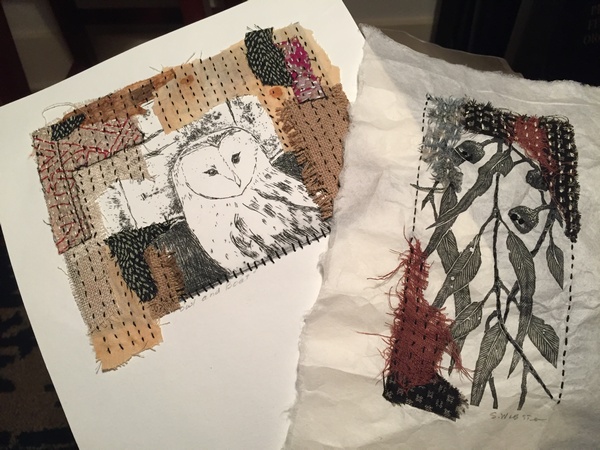 When I go to the framers this week to pick up my long stitched Australian piece I will ask her to cut mats for all the ones I have finished so far….then decide whether to buy frames for them or not.

It feels good to be working on something. I just need to make more prints or stitch several together to make a “quilt”. Once that needle is threaded, I just keep going, and going, and going.