Finally the last box of those men! These poor navigators had the burden of boats that would sink if ever put in water. Their phallic forms made of silk are covered with the text of what accounts for “masculinity”. They drag their own testicular anchors along with them through a sea of feminist text.

Here are a couple of details. 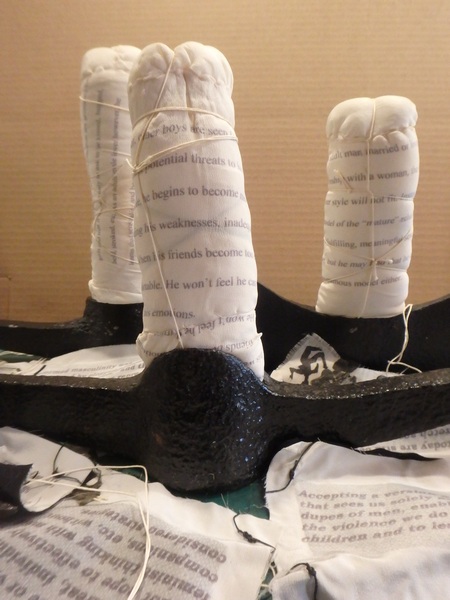 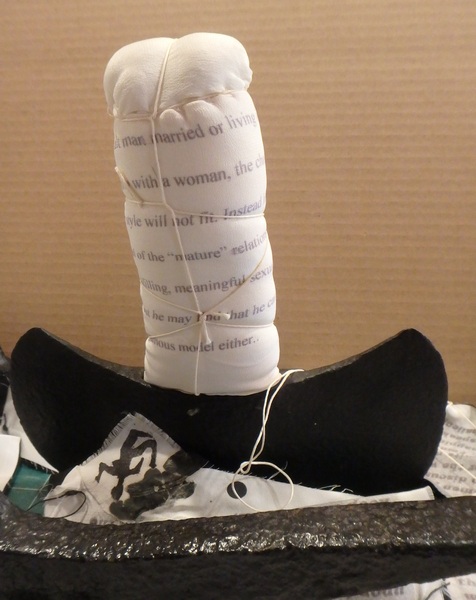 And really the best part after twenty years is how true the feminist text is. So good to read that I copied it off from the silk waves and put most of it below. Definitely worth the read. I wish I had kept track of the authors as well, but they are all somewhere in my research books on masculinity….and some of those are long gone.

I will wrap all these “boys” together with their bags. But their boats would be better served given to one of our window washers who does amazing art works with old metals.

“Women of today are still being called upon to stretch across the gap of male ignorance and to educate men as to our existence and our needs. This is an old and primary tool of all oppressors to keep the oppressed occupied with the master’s concerns.”

“Accepting a version of female experience that sees us solely as victims, as the dupes of men, enables us to ignore both the violence we do to other women and children and to less powerful men.”

“What made Friedan’s book a best seller was her detailed and sympathetic documentation of the malaise of the middle-class housewife, a woman who had been educated to expect, if not a career, at least something more challenging the search for a matching mitten.”

“Decisions to cut aid for the terminally ill, for the elderly, for dependent children, for food stamps, even school lunches, are being made by men with full stomachs who live in comfortable houses with two cars and umpteen tax shelters.”

“At a time when women, with good reason, are asking men to make known their most guarded feelings, when we want them to love and raise babies and remember our birthdays, it is also required that they be the ones to rescue people in a burning building. And startle the dragons when they are heard in the dark.”

“Considering the extent to which masculinity as it is socially constructed within patriarchy encourages males to regard woman’s words, woman’s talk as without substance or value, or as a potential threat, individual women cannot hope to effectively communicate feminist thinking with male relatives, companions, etc. without carefully considered strategies.”

“Feminist works that focus on strategies women can use to speak to males about male domination and change are not readily available.”

I find the fourth one down so true as I watch a Republican dominated Senate force their choices on women…..some things never seem to change.

Anyway, I am off to wrap these poor fellows up so they can compare notes and their struggles for survival in perpetuity.

Til next time when I tackle war with loads more sheets and shellac.