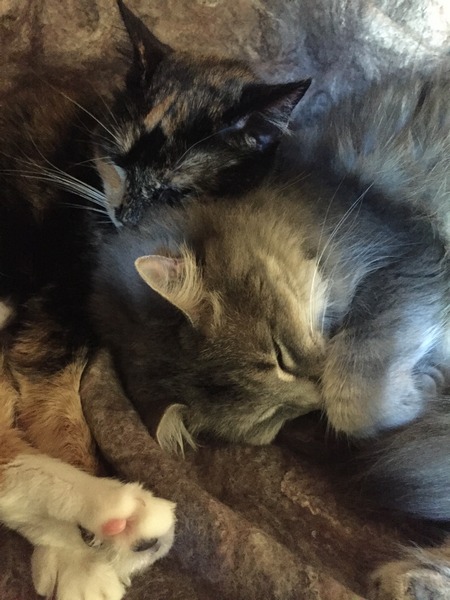 It is turning colder. I got out my felted blanket from Bridgett in Hobart, Tasmania. Both cats love to curl up on it together.  I have to gently move them over to get under it. Lovely feel and memories of down under. Sadie is always first to be on it. 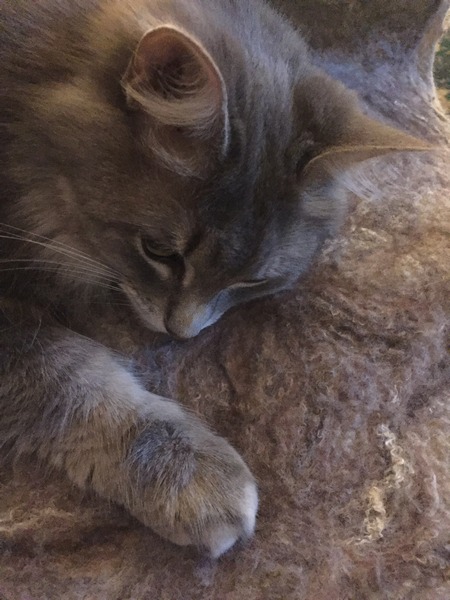 I have been getting my drawings a day done on time with the haiku. Here are the latest ones that are in my newly made journals. 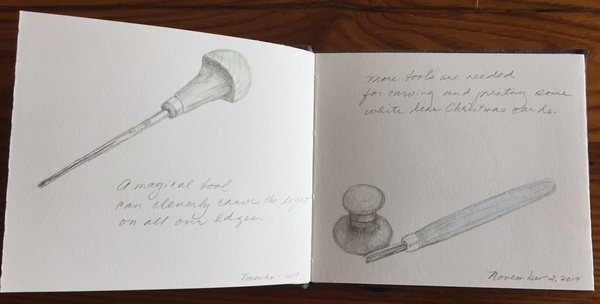 can cleverly carve the light

on all our edges.

for carving and printing some 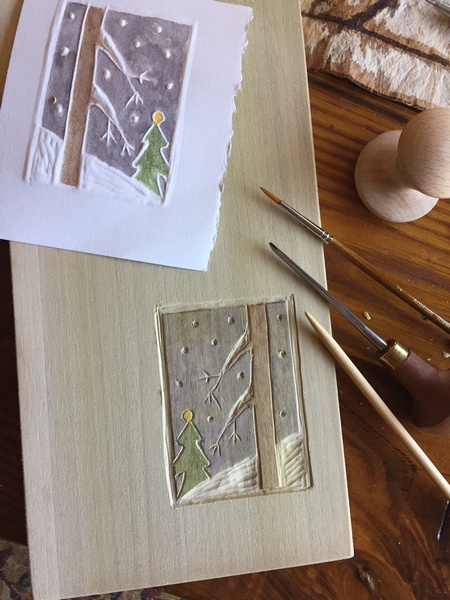 I have about fifteen printed so far. I can do this upstairs on the dining room table. Funny how I thought ALL printmaking must take place in the studio. Times change. 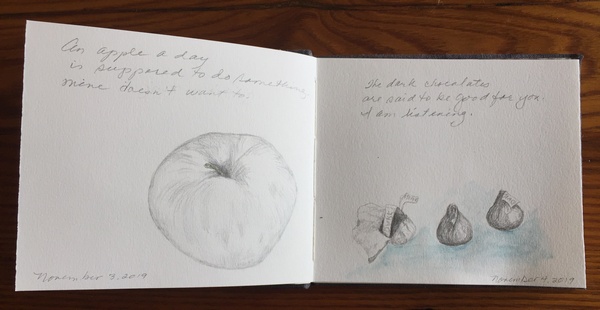 An apple a day

is supposed to do something.

Mine doesn’t want to.

are said to be good for you.

The only plant here

sits in the kitchen window

Why do we hold on

to the dried up remains of

When I finish up here I will go back upstairs and work on today’s drawing and print more Christmas cards. Not that many more to go now.

I went over to Andy’s house today just to see how it was doing and tell it that he was not coming back. It was hard seeing shoes he had just stepped out of, his bike all ready for a go around these hills, the table laid out with mats and napkins ready for company coming to have one of his wonderful meals….. I opened the glasses cupboard just to touch a wine glass that for so many years I drank from, even before Andy took the house over from his mother, Barbara.

She and I shared so many white wines in that house. We thought we were having the best of the best (reasonably priced) white wines from Australia. She shared my love for the country and we would buy any bottle that had a kangaroo on the label. Later ones with penguins. Really all it had to say was “Australia” somewhere on the label and we would give it a go. One of our favorites back then was Alice White. Silhouette of a lone kangaroo against a bright background. That was the front. On the back was the sad travails of poor Alice, who was suffering with amnesia and found herself in the company of Nick. Each year was a continuation of their saga. The last label that I remember about Alice was something like this, Nick had been attacked by a giant crocodile and Alice knew how to patch his wounds…..”could I have been a nurse in my previous life?”, she asks herself. Good marketing to say the least. 19 Crimes can market even better and I think their wine is better than Alice White. It certainly cost more if that is any indication.

I think I would like some of my ashes placed near Barbara’s and a bottle of 19 Crimes Sauvignon Block dug in nearby. She didn’t live long enough to try any of those wines and would have loved the adventure.

Anyway a cleaning lady will come and take care of what needs to be done in the house and a yard man will blow the leaves off the driveway. Andy’s lawyer has been in touch and I am to forward expenses that I will handle on to him.  Andy’s love and partner will arrive when she can bear to return to his magical place so full of memories. I might dig that bottle of white in while she is here so Barbara can start without me.

I saw this at the feed store and wonder about cowboys. Recently I bought the series Deadwood just to have some cowboys around. I miss the western movies that are not made any more. A recent series called, Yellowstone, with Kevin Costner has a supporting cast of not so much cowboys as former druggies on horseback. It is simply bad casting. They should have checked out Deadwood if they wanted actors that can look and act the part. But here is what I saw at the feed store and it made me wonder if cowboys are drawn to the Bible if it is an easy read version. 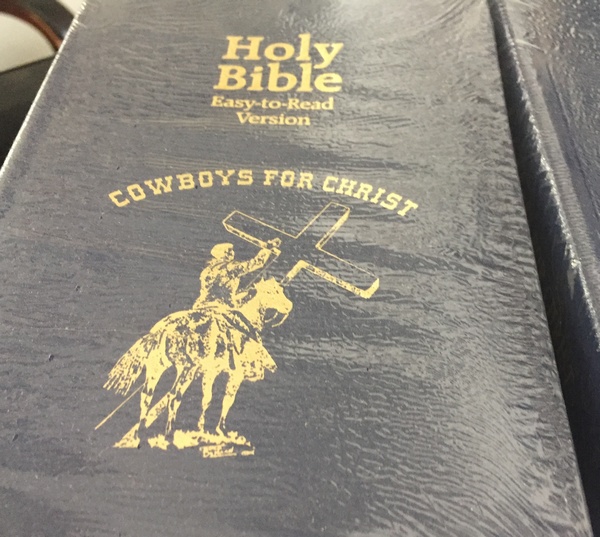 We used to have a church near here…a storefront actually….that was called the Cowboy Church. Lots of black painted plywood ranch hand silhouettes leaning against the outside walls and hitching posts. And on the marquee out front it said, “Rounding Up Souls for Jesus”. There were actually cars in the lot on Sundays. Maybe these were left over bibles from there. A man we knew that came from Europe and rented our apartment when he took classes locally went there once and reported back that all they did was rant and rave against gay people. That was all before the wrenchingly sad tale by Annie Proulx called, Brokeback Mountain. After the cowboys left and took the plywood characters with them, it became another church and then a perpetual flea market of nasty things left in the rain.

Speaking of cowboys our neighbor’s dog came over on Halloween with his costume of a bucking cowboy hanging on for dear life. 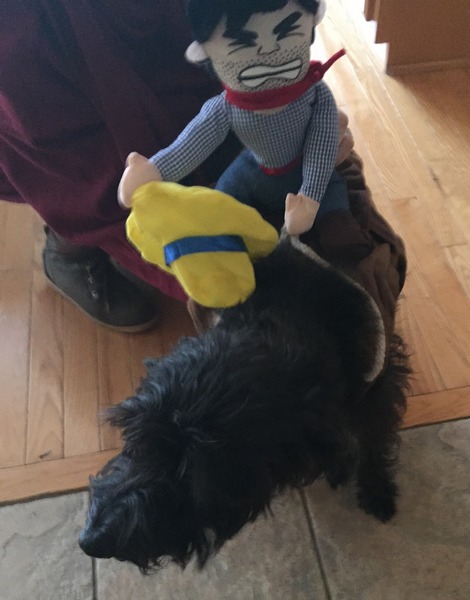 Cute. Extra treats for staying still long enough to get this picture.