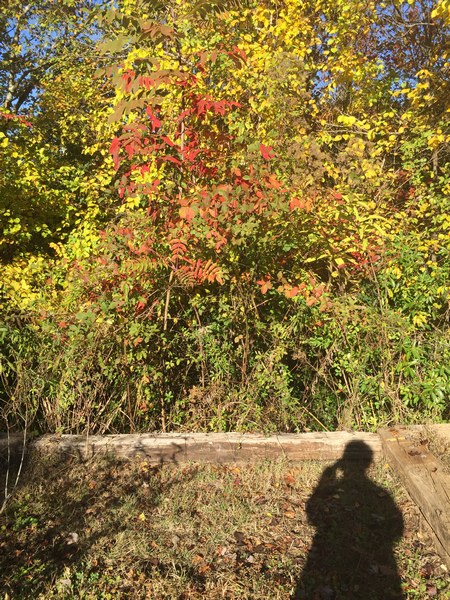 It is late October and with the past few days full of rain and now wind there will be few leaves left on the trees. It has been a short fall. Down to freezing tonight. It will be easier to keep an eye on Lee if he is inside.

This week we had an interview with a woman who would come to take him out for lunch or a movie or just a ride so I could get back in the studio and do something that would take more than just a few minutes. After she left he simply said, “No.” And much as I had hoped this would be a good thing I soon came to realize that it was not a good idea. What if she took him to a movie and in the dark the music got loud or he had to go to the restroom or wondered who she was. It is not worth it to put stress on him now.

Yesterday I had a student here working in the studio. I could continue to check on Lee who was upstairs. When I came up he was confused and asked how my mother was doing downstairs. She died about thirty years ago. When I was helping him get down for a nap he asked who I was. I told him and then he asked, “Do you sleep in this bed with me?” I said I did but way, way on the other side. He apologized for not understanding who I was and I told him after his nap he would remember. And he did. But I think we are entering a new phase of his dementia.

If I say some silly nonsensical thing he will laugh and then not so confused. Talking about the weather is always something to chat about over and over. Old men like talking about weather. Weather is a memory jogging subject. Today we went out to meet our friend for lunch at the brewery and he knew who we all were. He likes his porter beer with half a sandwich and both his and my servings of coleslaw. He gives me the chocolate coated pretzel they place on a stick across the top of his glass of beer. We keep to the routines we know.

I have my drawing a day which gets done with the haiku each day. Yesterday with my student, Kent, here I even got to start a carved block to print our Christmas cards. All in all a good few days.

Here are the last of Octobers’ drawings a day. 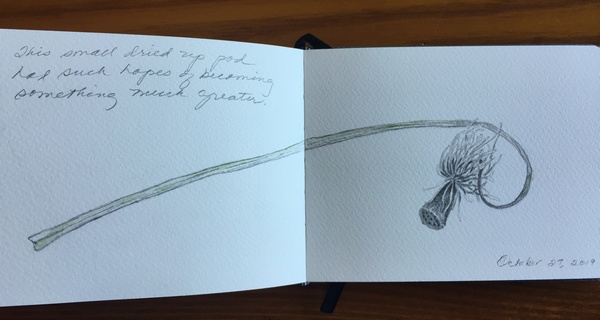 This small dried up pod

had such hopes of becoming

of some ginger wine.

a life it never should have

A cat toy is the

I have noticed how these drawings and haikus reflect my moods of the time.

So that was October and because I want to continue with this I made three more sketch journals.

They are covered with the backed fabric of worn out linen pants. It was close in color to the Milini journal I used for October and could not find on Amazon….only available in Australia. 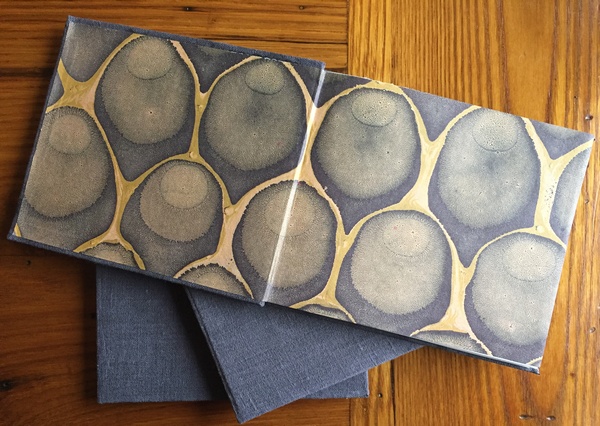 I used a marbled paper that I have been saving forever to make the end pages. 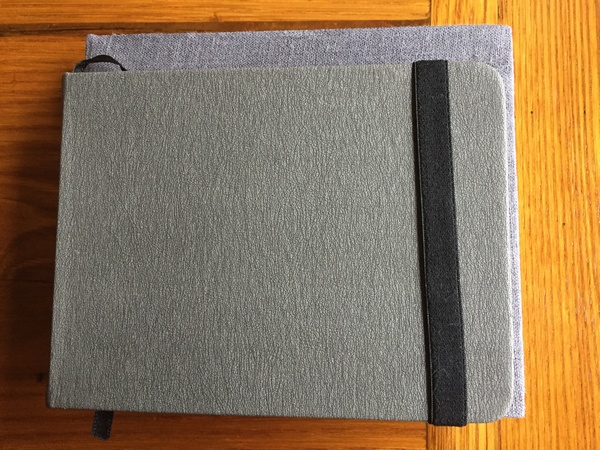 The new journals are just a bit bigger than the October one because the inspiration was upstairs and the papers and book board and worn linen pants were downstairs. I located an old leather purse that I bought in Florence, Italy to hold the pad for writing haiku, the sketch journal, hand made water colors, pencil, pen and brush.

I am looking forward to using them starting tomorrow.

Another thing I did today was head out to the liquor store. Yesterday I was informed that the incredibly stupid president that now sits in office is tariffing foreign goods. Among them Italian cheeses and scotch because it comes from Scotland. Fearing that the shelves might be getting low we made that our first stop. There was plenty of scotch there. I relieved them of four bottles of single malt between 10 and 12 years of age. I might just live in bourbon country or no one bothered to check to see if this was indeed true that tariffs were on the way….as early as November 1st.

I could not be more ready…sketchbooks and scotch.