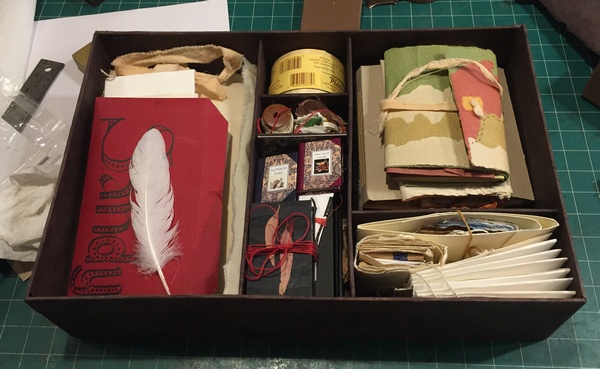 I worked on this box yesterday while letting a private student carry on with her first foray into dry point etching. The box holds every single one of the gifts and thank yous from Australian students over the years. It is 17″ x 11″ x 4.5 inches. Today I will try to figure out the lid and extra support for the base.

It was so good having someone in the studio asking questions for the last two days. She made the field journal exactly like the one I made….only hers is a lovely slate grey and sports a beautiful raku porcelain button I had in my stash. I did not photograph it…just got busy.

She also brought along her XCut XPress to try out while learning how to make her first etching print. I gave her a small  plate much like the one I use for my own etchings and told her to draw an image the same size as the plate. I showed her an older one of mine. 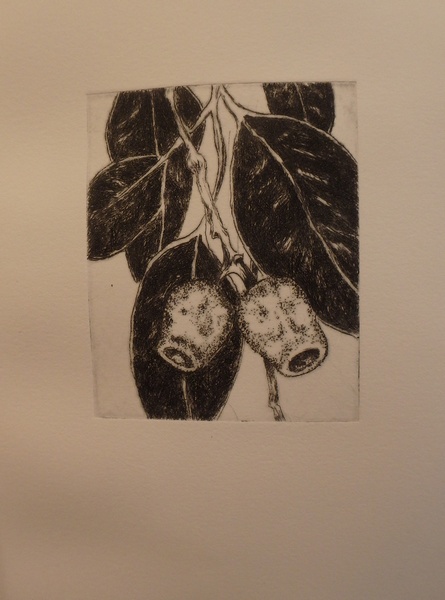 It took her the entire afternoon to adjust the etching and the inking to get something close to what she expected. I think she is going to love making small prints.

Not only did she make the field journal/box and learn how to do drypoint, but she took notes continually on whatever I was saying. We problem solved a binding issue on one of her artist books, discussed free computer programs that I use to adjust photographs of my artwork, and talked and talked. Her husband also suffers from dementia and sharing stories helped a lot. It was good for both of us and I look forward to her returning.

Demonstrating how I can change photographs with a simple program, I was reminded how much the purpose of piece of work can change its meaning. It can go from tactile object to the ghost of an illustrated idea for words. 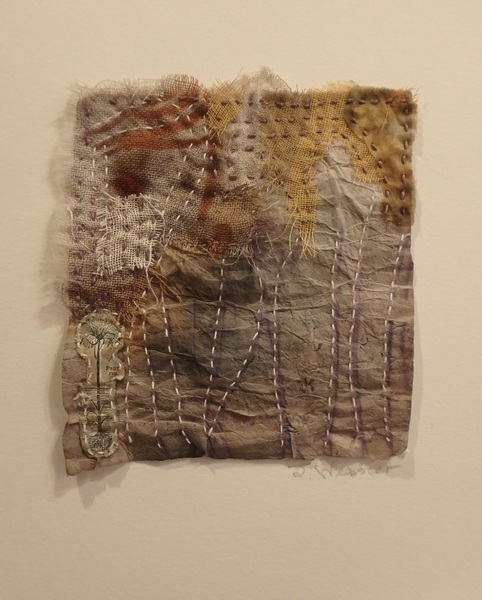 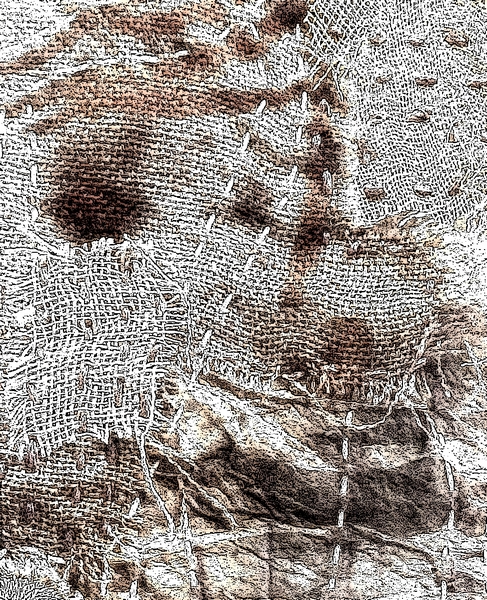 Doesn’t this second image talk to you about holding things together? Unraveling? Marks of age? It makes me want to put the feelings into words and will likely end up illustrating a poem. Wouldn’t it also make a great cover for a personal journal?

It would be easy to get completely wrapped up in making images like this on the computer. But then they just become manipulated pictures….anyone can do that. But having this essence of something you made by hand that shows your own way of making a mark seems to capture the soul of what you were thinking while engaged in the creating. It deserves to be thought about, written about, explored more deeply than just an interesting image.

Anyway I will share what I write about it. And also show the finished Australian Gift Box in another post.