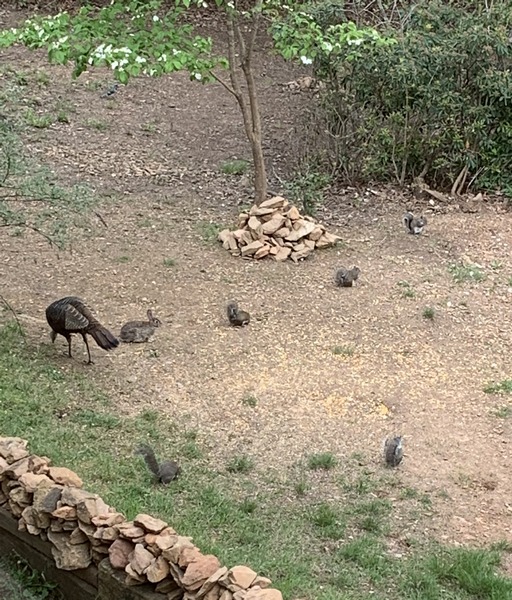 I took this picture just the other morning. The deer that was supposed to be here with the turkey, birds, squirrels and rabbit had just exited stage right when I positioned my iphone. These animals have not got the word on social distancing. When I can catch them all in the yard again I will take another picture. 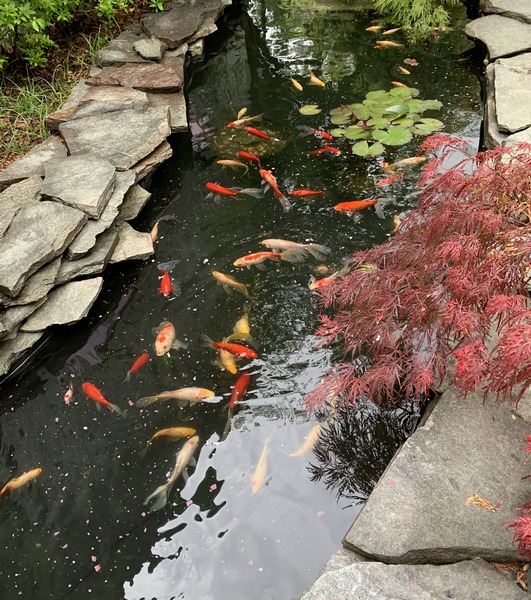 And a close up of Jay, the large mottled fish named after an old friend who we bought it for. Jay moved on in more ways than one, so Lee and I rescued the fish and brought them into our pond. He is quite old….maybe ten years by now. His tail is very long. 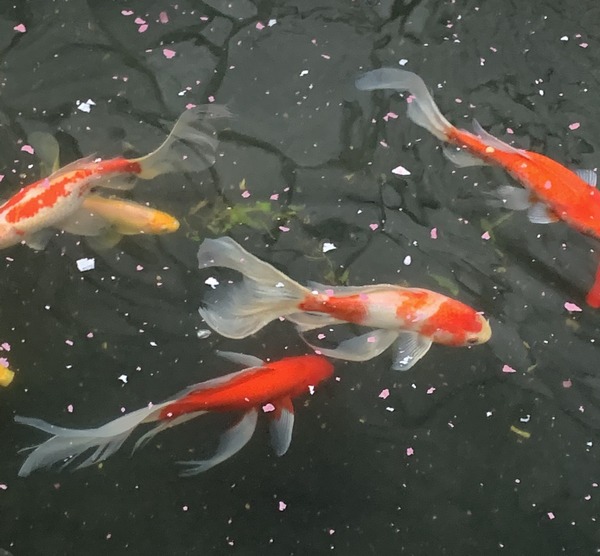 And inside the house I redid my office/gym a little bit because I noticed that I was putting off working out like I promised myself I would. 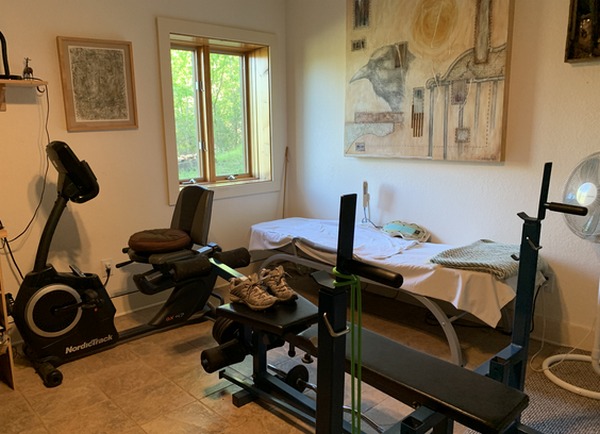 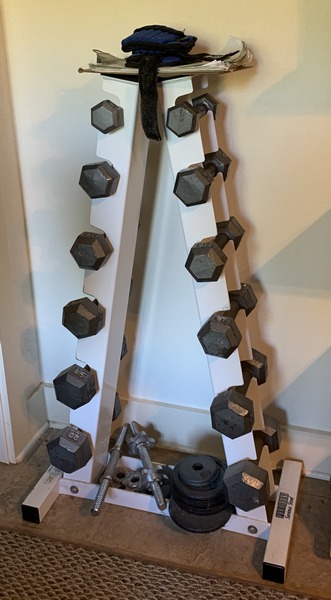 Now I am getting up and putting on the gym clothes, doing twelve laps around the driveway to get at least 2,000 steps in, then coming downstairs to work out with weights. I can get Lee situated in a chair to watch an episode of Bosch while I lift weights and/or get on the recumbent bike. The only time I can enjoy the Migun bed in the background is when the caregivers are here. It has set timed programs that take up to thirty-five minutes to complete. Heaven! 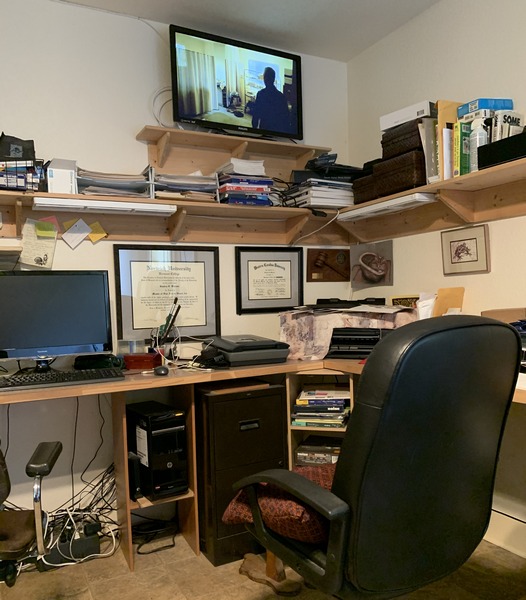 I am sitting in front of that monitor now.

And I did get back into the wildflower sketches/watercolors… 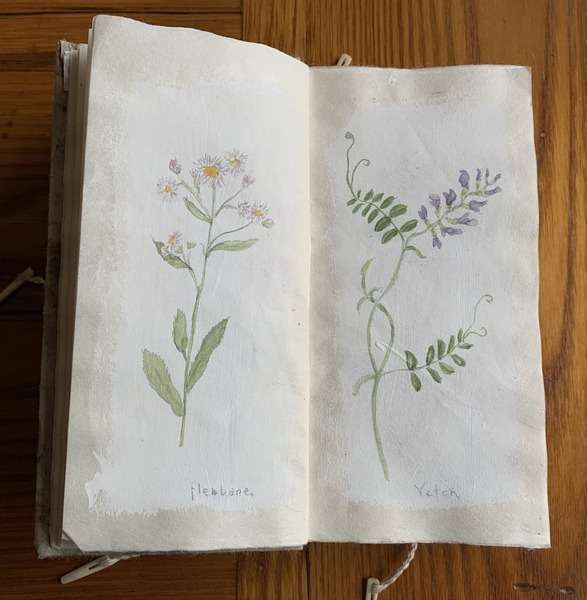 It is going to take forever to just finish this one sixth of the book, but I do enjoy doing it…simple and just a cut above childlike. 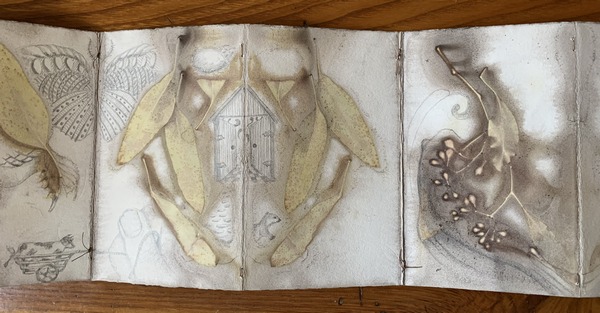 I resisted making that center fold into a goat or donkey. I put a door there for the stoat to take his guests through. And I am staying with the subtle reference to the letters of the alphabet in order….something on each page that begins with the next letter….sometimes more than one thing. There is no reason for it other than it gives me some type of disciplined thinking….some anyway.

And remember the cow in the cart. I was wondering how it was being pulled along. Then realized that my thinking was not broad enough. 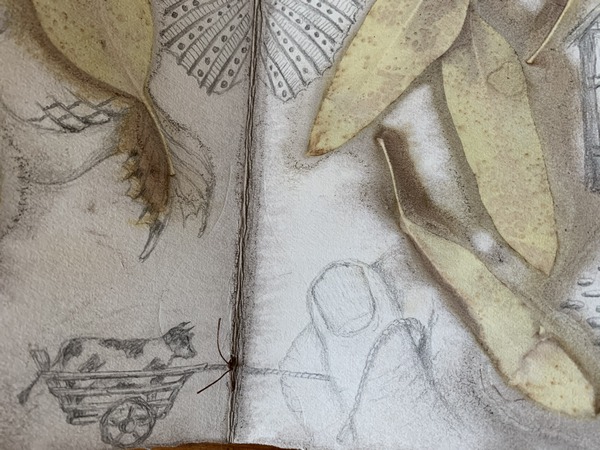 How wonderfully strange that is.

And because the internet went off while I was trying to place this last picture in, I decided to start to write the story. And it begins not only with “Once upon a time,” but with a memory of me being not more than five years old. This is going to be fun to do and will keep me amused for some time.

Here is the beginning so far…..

Once upon a time a fox interrupted a little girl’s sleep with a gentle nudge. When she opened her eyes, she saw him smiling into her face and she smiled back. He was so beautiful with his red coat and flashing white-tipped tail. He said he wanted to show her something but she must be quick.  She asked if he could wait for just a few moments while she got ready.  And when she returned all she saw was the fox disappearing into the woods without her. He never came back and she never forgot him.

She was five years old. Now seventy more years have passed. And this morning, very early, another animal came for her. This time it was a sleek-coated stoat. His face was close to hers on the pillow and she woke to his gentle breathing. Felt the moisture of it against her cheek. She opened her eyes slowly and smiled so as not to frighten him away. When the stoat knew she was fully awake he said, “The fox has sent me.”

Won’t this be fun!

I need to keep the writing tight enough to fit into the space between the front and back pages so it can only be on one side on a three and one half by 4 and three quarter page. The adjoining page will have its part of the story on the other side of this sheet. It is the type of story and format that make me wish I was not so adverse to calligraphy…then I could have written it by hand in perfect little letters in a pale graphite. But my computer can write in pale grey and I do have choices of fonts.