Some of the spring trees on our walk to the mailbox. I wish the trees would stay like this instead of becoming so heavy and dark and intruding like they do every year in the summer’s heat. They burden themselves and me when I have to look at them. Then they fill up with dust from the road and become even heavier. The rains will wash them off but then just make them grow bigger and heavier. I just wish they could stay like this. 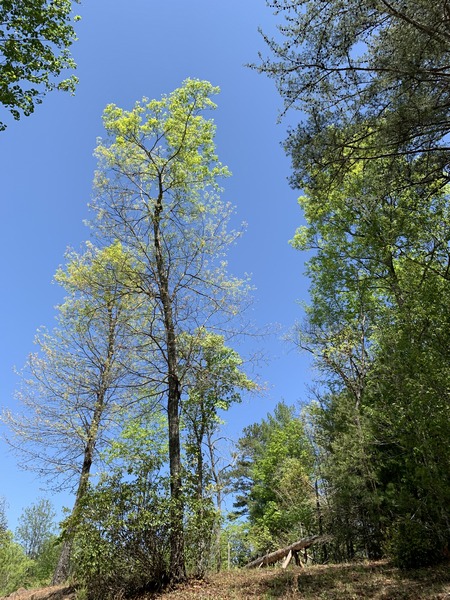 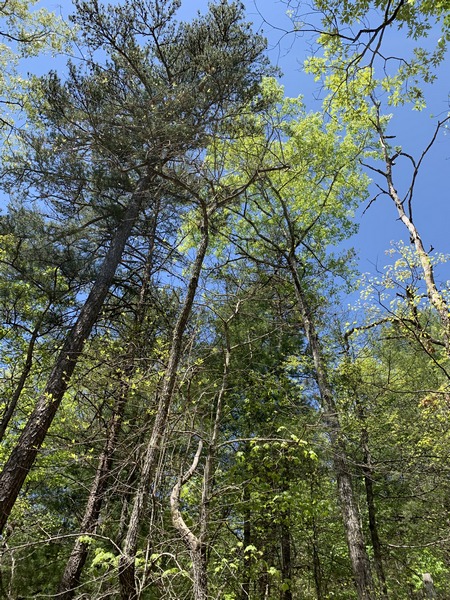 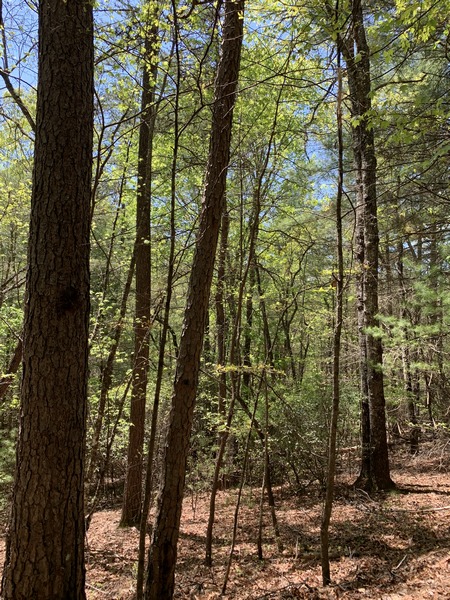 Our gardening is now done by pots on the deck. 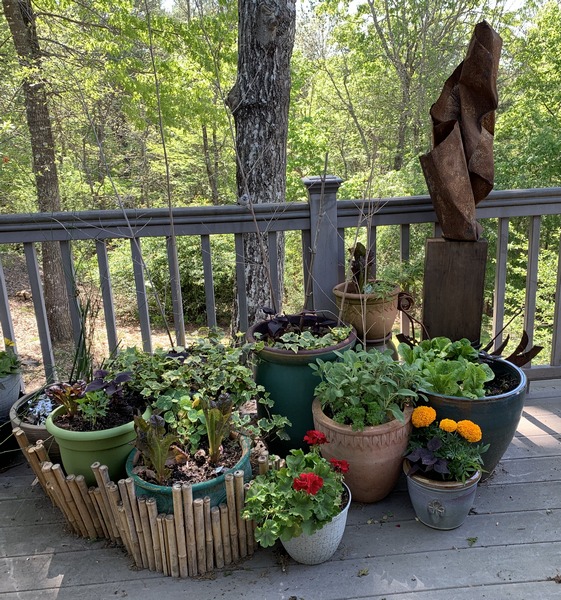 The only plants that grow in the screened porch are Boston ferns. We have plenty. 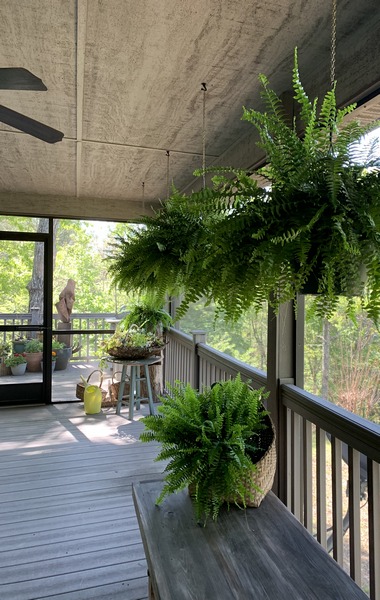 Lee enjoys being out here with a cat on his lap and a glass of wine. 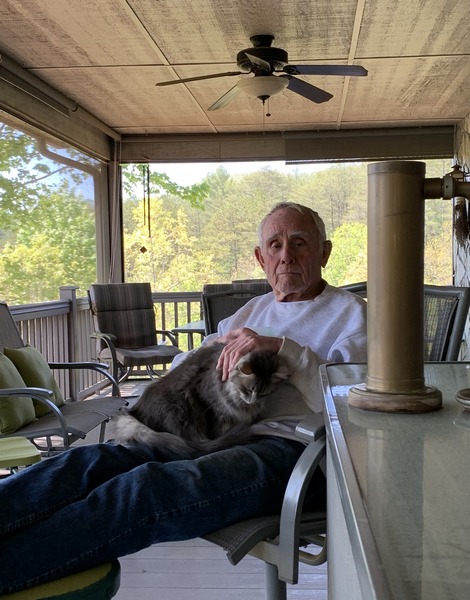 Every year for Christmas he has bought me this one quart bottle of Jean Nate. I have worn it since I was a teenager. It is light and fresh smelling….it smells clean. Not like those heavy perfumes that many women wear…the ones you don’t want to get in an elevator with. Did you know that this cologne had a key role for Betty White’s character in Boston Legal. She was being broken out of a nursing home and they had to back to get her Jean Nate. I can relate to that. Anyway there are now two more full quarts of it under the vanity. Lee has not bought it in years but has our son get it for him to give me at Christmas. He might not remember much, but he knows that this is an essential gift.

I like that it comes with “moisture replenishing complex”, whatever that is.

Also, six more days of drawings a day. You don’t have to look at these nor do you have to read the haiku. It only matters to me that I keep this practice up. I get better at drawing and the haiku appeals to my sense of brevity. Did you know that I was thanked at the end of a semester in undergraduate school for my brevity? I had to look it up and did not know to this day whether I was being insulted or not. 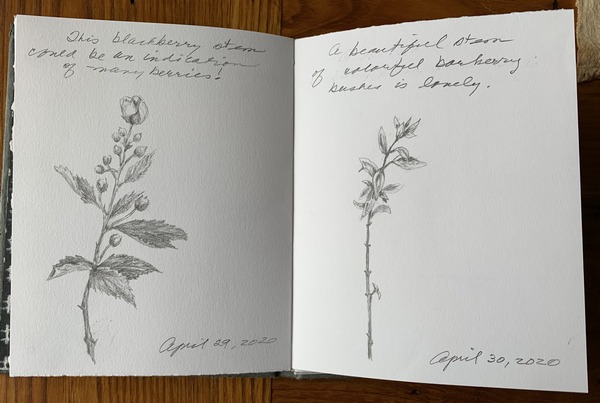 could be an indication 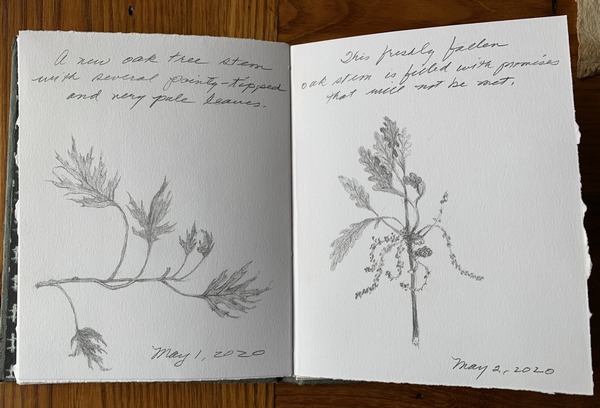 oak stem is filled with promises

that will not be met. 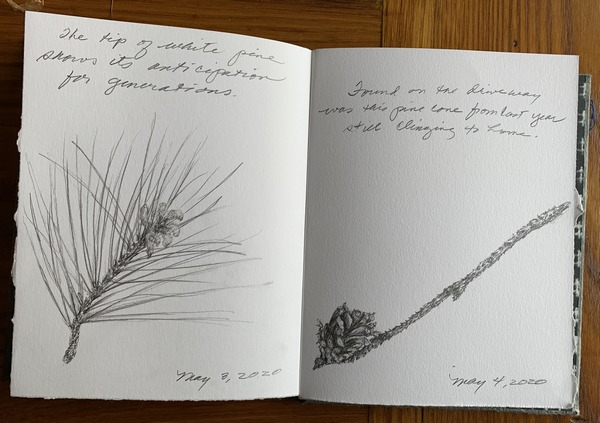 The tip of white pine

Found on the driveway

was this pine cone from last year

And the story of the stoat and the old lady continues. I have counted ten pages on each side that will have the text inserted between. So I need twenty pages of the story to fit onto each side of the insertion.

I woke in the middle of the night with how I will end the story. Now I need to pace myself so as not to rush there too quickly. Here are the next pages of images…not sure if I am through filling them in. 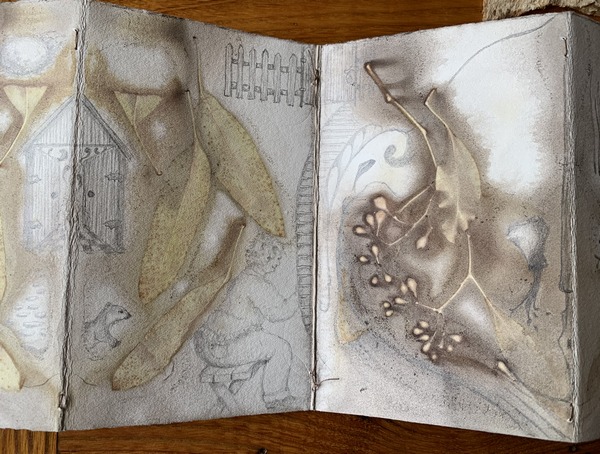 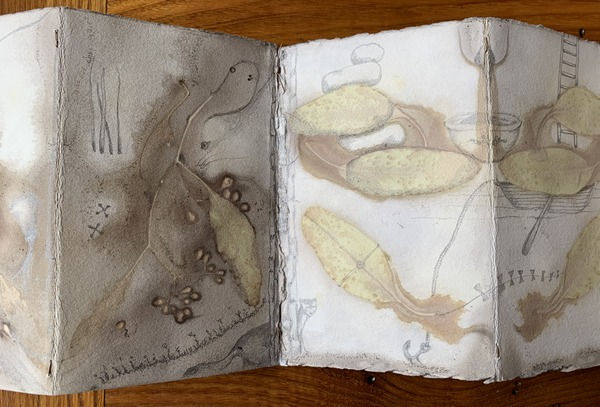 And here is more of the story. (I edited some of those first two paragraphs but did not change the happenings).

He did not mind waiting while she dressed.  But there was no time for breakfast. She needed to come with him now because now the time was right. There was no need to lock the door and no reason to look back.

With each step the old lady’s world changed into something else. Something not quite the same.

She dare not take her eyes too far off the stoat for fear she’d lose him and have to return home. Out of the corner of her eye she thought she saw a bear just past the apple tree. She was sure he was grinning. The birds seemed more extravagantly plumed and patterns appeared on everything that flitted before her eyes. She pointed to a cow getting a ride in a cart but the stoat kept going.

Up ahead he paused and waited for her to catch up. There was a stone path leading up to two large doors that had been left open.

“Come through here and we will rest a little while.”

She eagerly followed and took a seat at the table by the pond. There was hot toast and marmalade, steaming coffee with just the right amount of cream. The stoat sat across from her and smiled. If it had all ended right then, the old lady would have been satisfied.

I thought about giving her a name and finally came up with one that would work as a child’s name and as an adult’s. But in the end after trying it out, decided she would remain nameless. … just little girl and old lady.

I will work on more drawings into the book and stay with the alphabet order for some of the images. I picture someone reading this to a child and the two of them finding things together. It would have to be a child with an imagination and do those kinds of children still exist?

My childhood was so free and full of adventure. In summer my brother and I would go into the woods for the weekend. Take a couple of potatoes to cook for dinner in a hole in the ground with a fire, and some sandwiches for lunch. One time we found an old door and turned it into a raft to float down the river. Other times we would walk all the way through the woods until we got to a tiny airstrip and imagine flying off in a small plane to god knows where. It was always an adventure. We’d gallop down the paths riding our imaginary horses, Thunder and White Cloud. We’d come home Sunday morning dirty and hungry and tired.

This stoat story is a bit like going home.