An old friend in Australia reminded me after the last post that she was so happy to have one of the Common Thing books I talked about. Gloria Alport, who hosted me on several early teaching tours in the Sydney area. I smiled when she mentioned having the little book. The memories of being in her home and walking to her garden stepping on sample squares of upholstery textiles. They made such a lovely path, like magically marked slate stones embedded in the grass.

I also think of Gloria each time I attempt to draw something in a sketchbook. She took me to the Art Gallery of New South Wales and we drew things together. She told me that I made lines around the things I was drawing and to remember that those things were objects in a space, part in sharp detail and part fading away into the blur of edges. I remember that every time and remind myself to not just look at the outside edges but see what is happening in the space it takes up.

So I took along a sketchbook that I bought in New York City when Gwen Diehn and I were touring museums. It is a replica of one that Van Gogh used…..or so they say and of course i needed to have it. Here are a couple of drawings with Gwen done in that new book and the book itself. 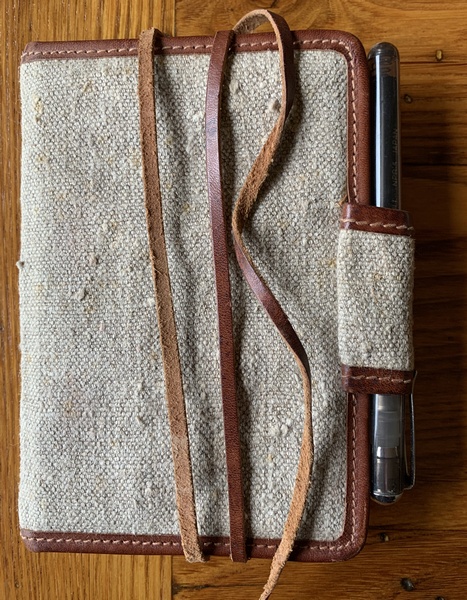 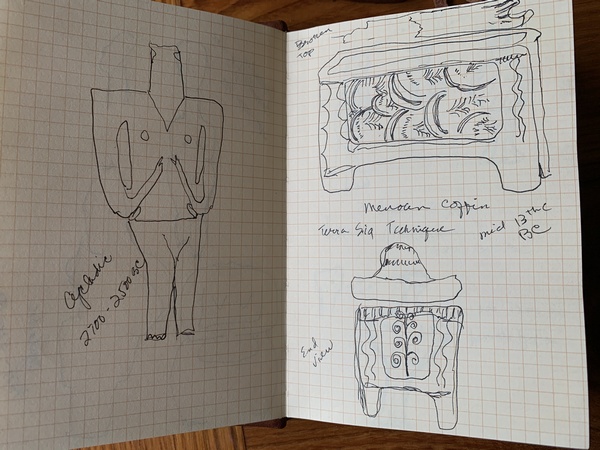 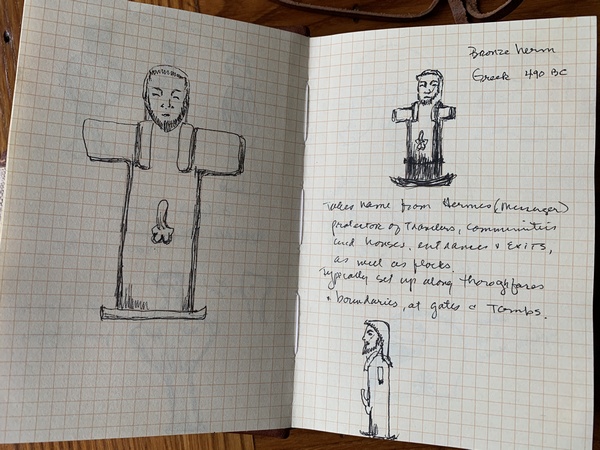 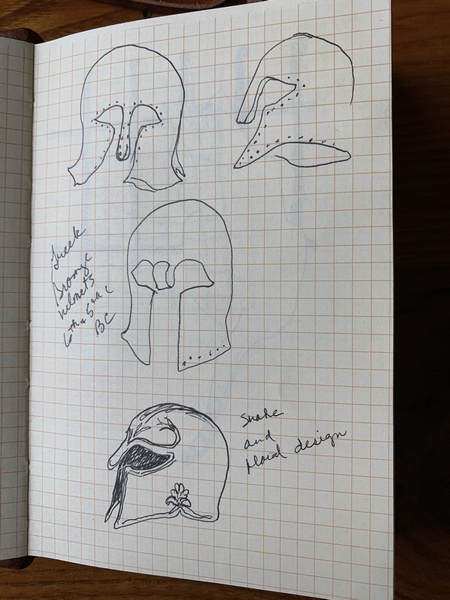 Gwen has always been the fastest pen sketcher I know. It took some doing to keep up and get the ideas down quickly to use as reference later for my work about men in graduate school.

And here are the pages I was drawing with Gloria a short while later. 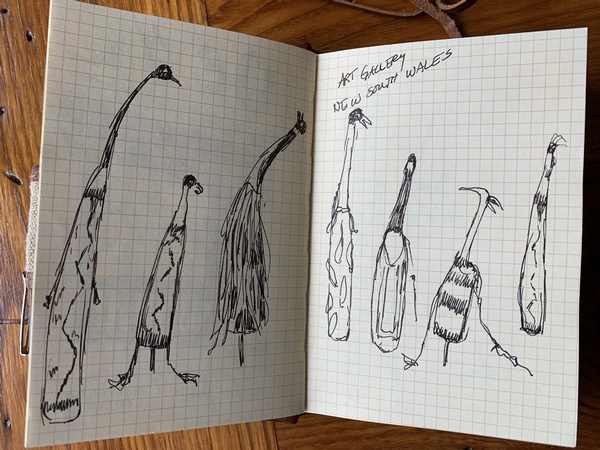 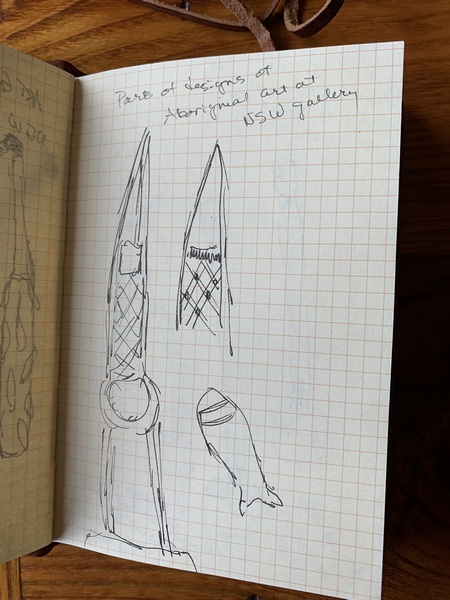 See what I mean?

Mostly I used this book only in museums and tried to get as much information as I could to take back home with me.

Here was my introduction to Bea Maddock, an Australian artist, print maker, and user of earth pigments. I could have stayed in front of this massive piece about the land of Tasmania and its Aboriginal history for two days and not seen all it had to offer. 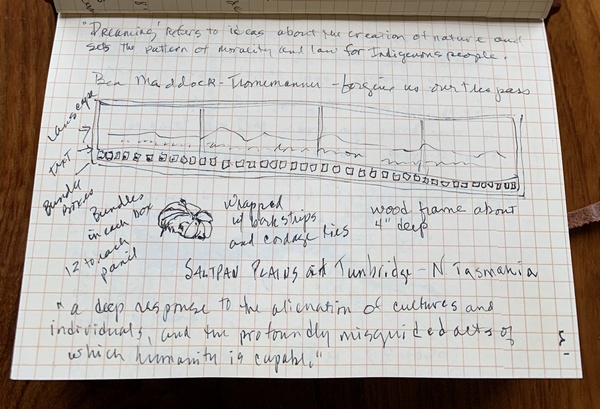 Over the years that followed I had many more opportunities to see her work. And the only book about her that I have is more about her time as a print maker.

Later on I found myself in Vancouver at a museum without this little Van Gogh book so had to buy another small sketchbook in the museum store. It was an exhibition featuring the works of Emily Carr, Georgia O’Keefe and Frida Kahlo. I evidently did not bother to make my way to Kahlo’s work. I was too busy looking at the trees of Emily Carrs, reading her words and Georgia O’Keefe’s. 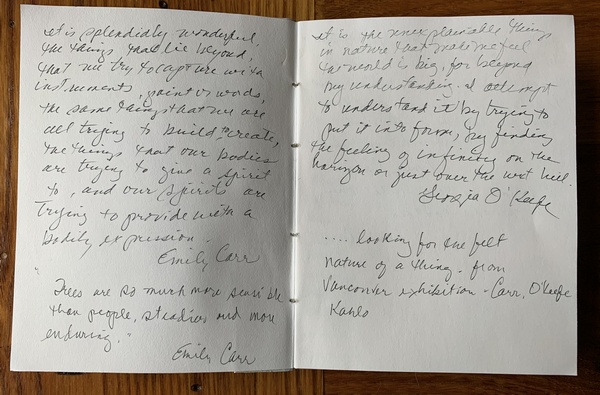 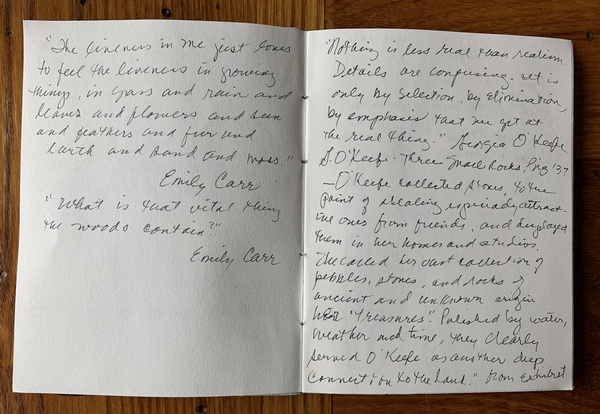 “What is that vital thing the woods contains?”  Emily Carr

“It is the unexplainable things in Nature that make me feel the world is big, far beyond my understanding. I attempt to understand it by trying to put it in form, by finding the feeling of infinity on the horizon or just over the next hill.”  Georgia O’Keefe

I found this book I made to explain about altering images of fine quality inked magazine pictures and then using those in your own work once they are way beyond the original artists work. It was a National Geographic aerial view of someplace arid, changed using a cleaning solution after a few hours of making marks with gesso and clear glue. 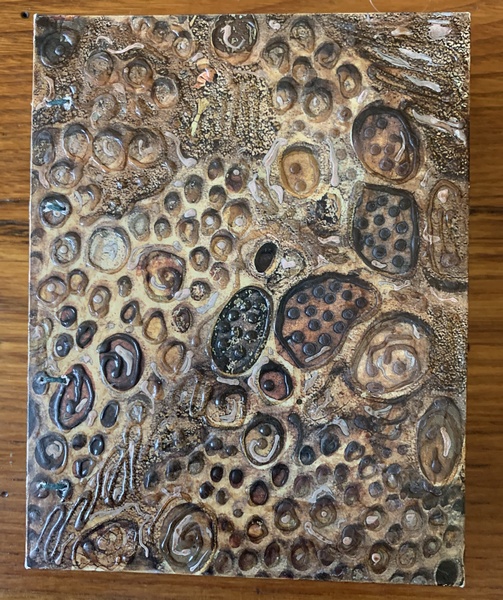 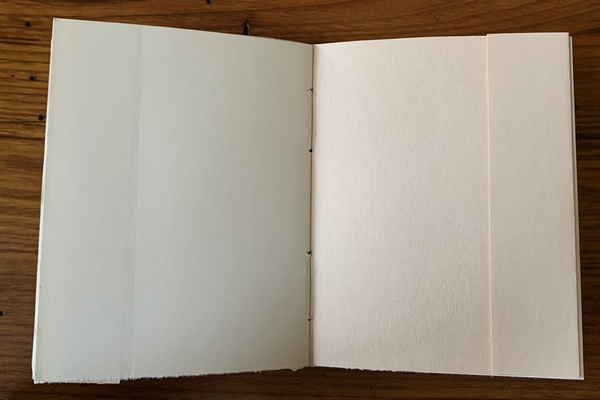 I was also giving a lesson on coptic binding used on this book and not wasting paper by folding the too long parts back into the book rather than cut and toss.

I like the feel of this book in my hands. It is about 4.5 x by 5.5 inches x 1.5 inches thick. I wrote how the book was made on the inside front page, then being influenced by Emily Carr I did a wash of trees over the ball point ink writing. 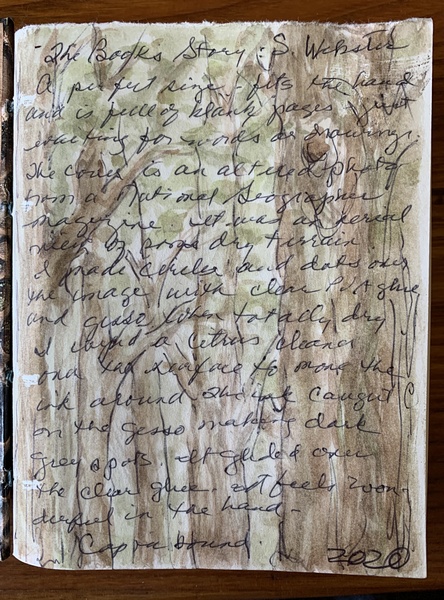 I think I will use this for just thoughts…the kind you just need to get out. No drawings allowed.

Here are six days of drawings a day…even went a day ahead just to finish off this sketchbook. It was number one of four made to use this year. Now I can start on number two day after tomorrow. 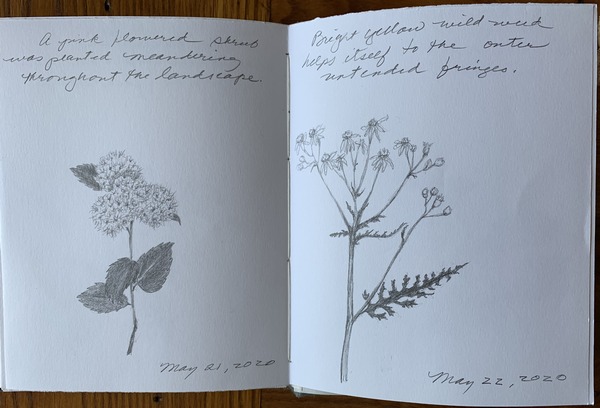 helps itself to the outer 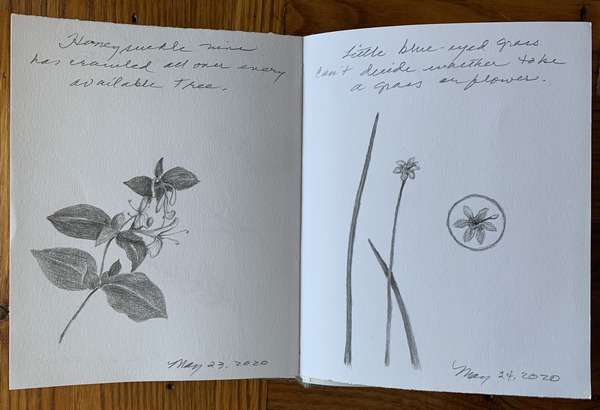 has crawled all over every

can’t decide whether to be

a grass or flower. 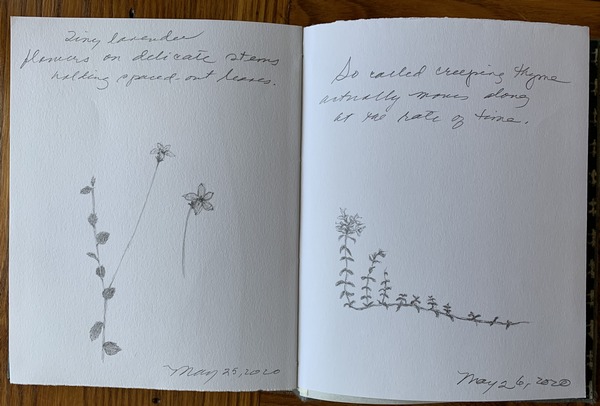 on spaced out leaves.

at the rate of time.

Okay enough for now….taking a break and going to read.