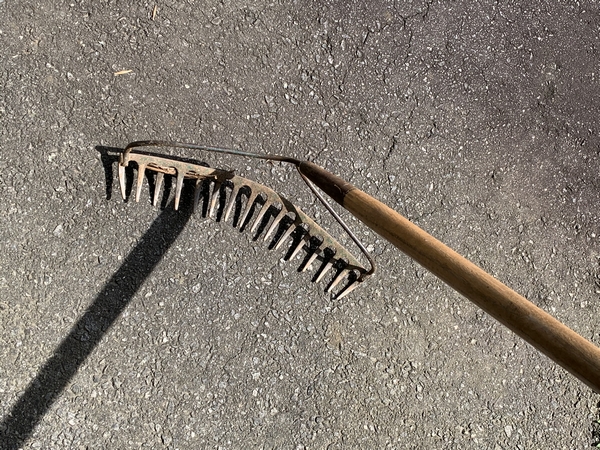 This is Lee’s rake. He has used it for a long time. It does not do much but he used it anyway. It’s condition is due to his trying to uproot rocks and roots. When I found out I could order and curbside pickup at the hardware, I got him a new one, a bright red handled one. Besides that, I got two new bottles of super glue to put things back together.

I can’t put his brain back together. I can’t offer much in the way of comfort when he cries, confused and wanting to go “home”. I just rub his shoulders, tell him who I am, where we live and how long we have been together….fifty-three years. He remembers none of that and thinks I am not being truthful. This only happens on cloudy days and late in the day. I know it will happen more often as time goes on but it is just so hard.

I don’t dare cry, I don’t show any emotion that will make it harder for him. I simply chat away, filling in the empty spaces of his sobs. And then it is over. I suggest a drink or a dish of ice cream or a walk around the yard.

We are isolated. The joy comes from twice weekly group calls to family and the mail box when a friend sends him postcards with his name written large enough for him to read, when another friend sends hand drawn postcards that always have his name somewhere on the card…and those thoughtful friends from down under who remember me with kindness. He does not know who the people are behind the cards but likes that he is thought of. So thank you to the precious few who do this for him and me.

He continues to line up rocks. I continue to adjust to a life that has changed so drastically.  Here are some things I pointed out to him the other day. 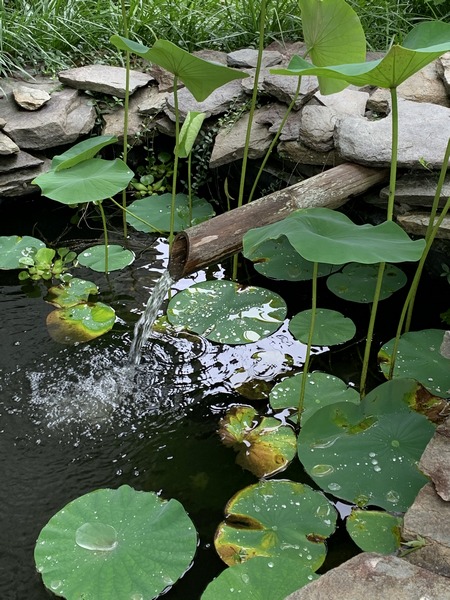 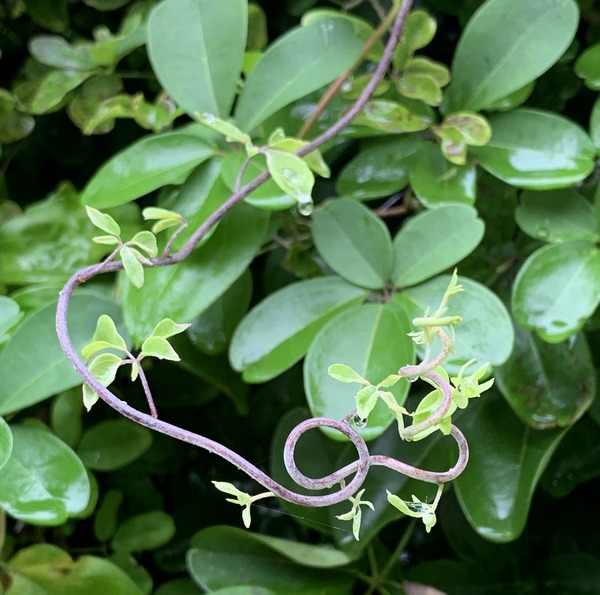 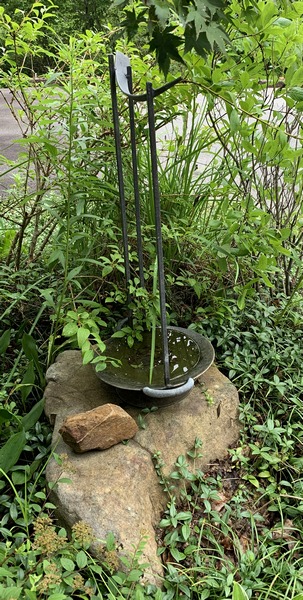 I think how wonderful it would be to crawl deep into here and not come out…..but I won’t. 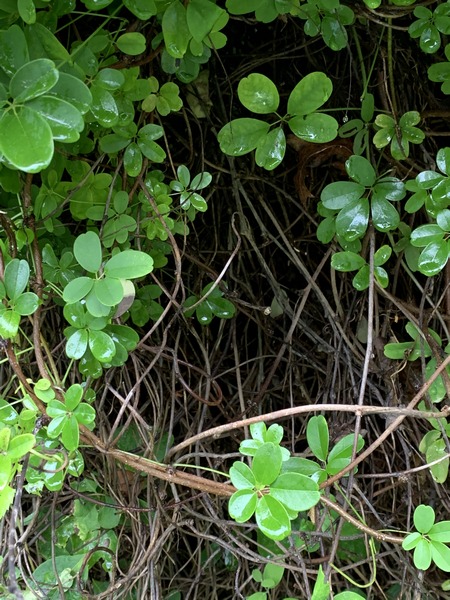 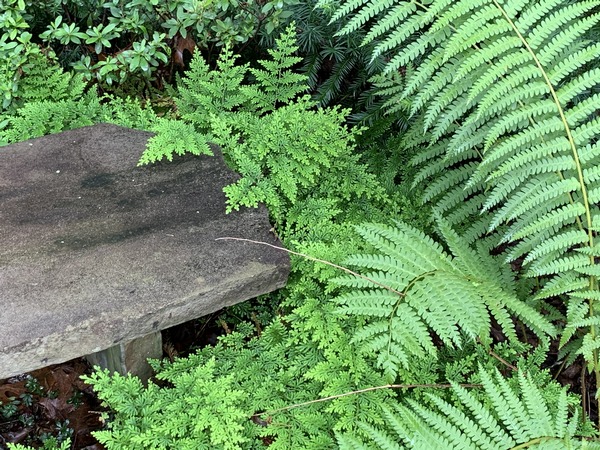 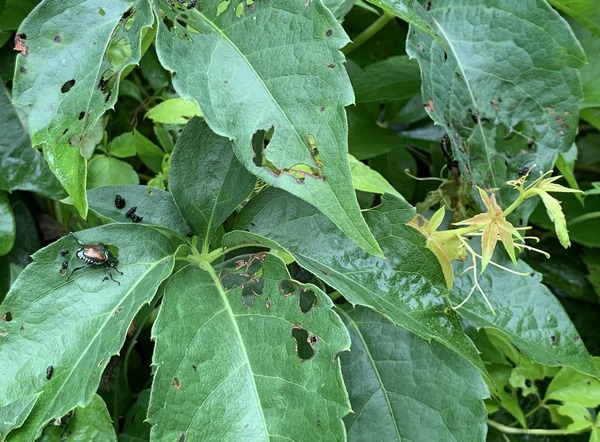 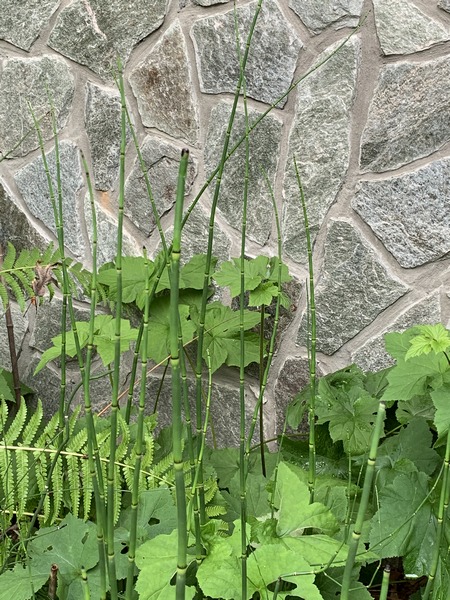 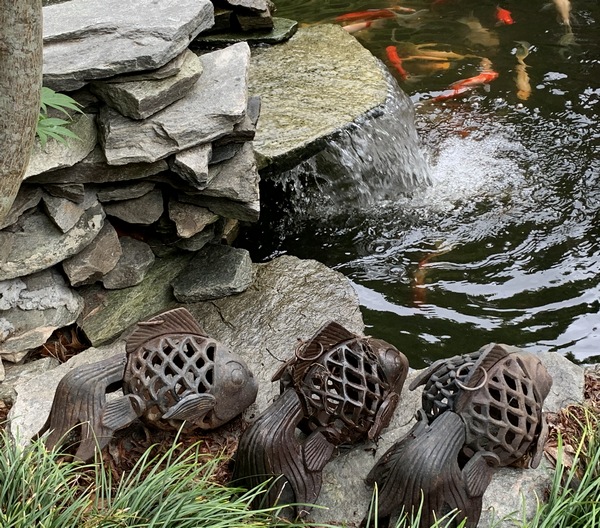 And some of his new installations along the driveway. 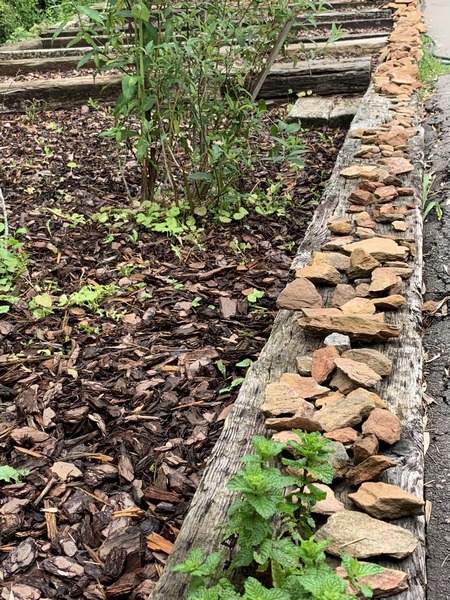 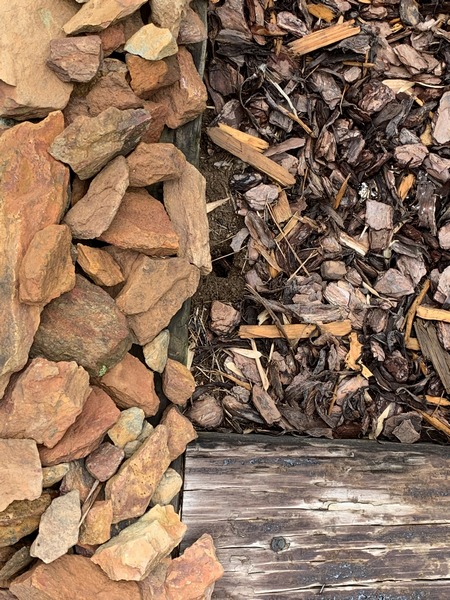 This morning he brought me four small rocks like the ones above. I thanked him and said that tomorrow morning I was going to do a drawing of them all stacked up in my drawing a day book. He was happy with that idea and we carried them into the drawing “place”.

Here are the last four days of drawings. 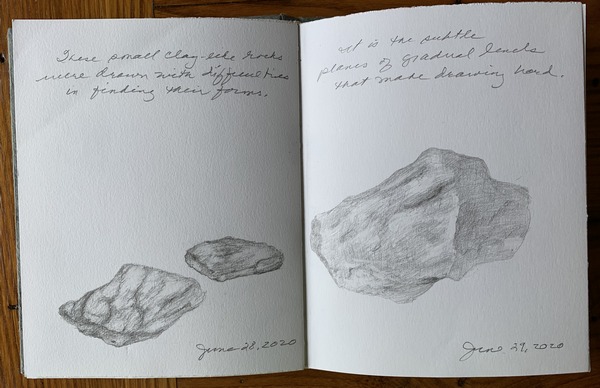 were drawn with difficulties

in finding their forms.

It is the subtle 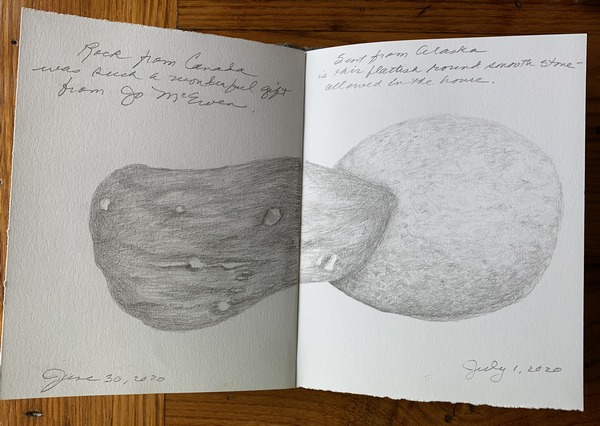 was such a wonderful gift

is this flattish round smooth stone

allowed in the house.

I look forward to tomorrow’s drawing time and getting Lee’s approval.

The other day I found some journals with only writings of observations. Here are two from a fairly recent trip down under.

(I think I will fix this drink tonight for our family call at seven.)

The room fills with the noise of women. Collectively it is not the sound of voices, but deep-throated cockatoos. The room rattles. There is a steady chink of wine glasses. The only discernible voice is the one next to me and it is a shame I have no interest in what I hear. The voice you want to listen to is at the back – where the faces show interest and intensity. I want to know what warrants that.

Women are hard to gather together when it is required – not so much when an inner voice instead, demands their presence. The carpet is hotel lobby red with evenly spaced medallions of green leafy shapes forced into squares. I sit by the podium because I can use the table to hold my own glass of wine.

Whimagery – “the interaction of thought and light, and reveals the hitherto unknown aspects of history.” Also, the release of our minds into fantasy in order to enrich our imaginations.”

Those two words and their meanings seem to be very much where I am now, here and not here, both places full of the never ending thoughts of my own imaginings.

Okay, til later. I need to do some trimming of the test form for the Stoat Story. Lee is outside with his caretaker and some rocks.