Yesterday I wrote this all down as I was recording what might be the next blog….Somewhere in the night I told myself, “Nah, don’t post it.” But today I think it really captures what it is like being alone in your own space adjusting materials and thoughts in good company and having a legal pad and slick ball point pen that can keep up nearby.

So I will start there…as written.

I am writing this on a Saturday afternoon, 3 p.m.

A banana bread just went into the oven. The kitchen is cleaned up and now I am back in the studio surrounded by scraps of paper and cloth. 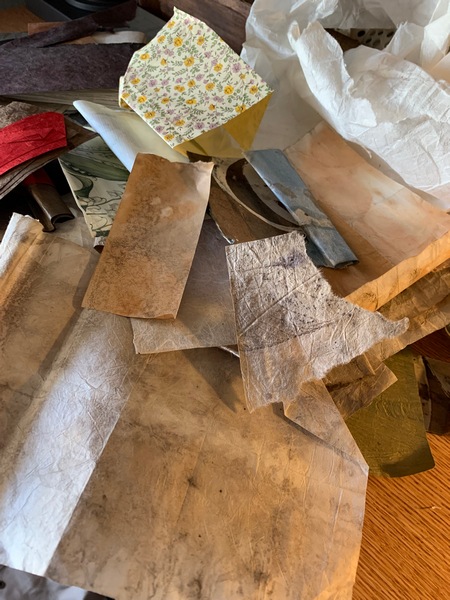 And my iPhone is tuned to Lyle Lovett Radio. The music jogs memories.

Lovett sings of $10 worth of what he values most. I love it that one of those things is a poetry book that he loves more than the woman who wrote it for him.

Willie Nelson has a voice that can make you want to live in Texas. But the reality of being a woman in Texas brings me back here in the studio where he is temporarily on loan, keeping me company with my things and memories.

I have poured myself a scotch to better just sink into this mood that is hard to describe. It is a comfortable, mellow place that begs to be put into words.

Jackson Browne was just applauded by those who loved hearing him in person. I give a smile of appreciation toward the iPhone.

John Prine just strings the best and simplest words together and chuckles as he does it.

Keb’ Mo’ sings about women like they matter more than his guitar. Nice.

Then there is an occasional Bob Dylan, who makes me happy to have a scotch to fall back on. Obscure lyrics that end about the time I take a guess as to what he is saying.

So that is pretty much the musical part of my afternoon. The best I can say is it is “comfortable”. Does the generation behind me have comfortable music?

Oooh, here is Van Morrison with his extra syllables.

“Time is slipping away”

“She is only queen for a day”

Today is my queen day and they don’t come often. I sometimes wish I had a bit of company for them. But soon talk myself out of that. What if they hated Lyle Lovett? What if they thought only “classical music” was the way to access deep places in the heart? What if they wished they were some place else? I have saved them the dilemma of how to make their exit by not inviting them in.

Here is what is going on to get me here with scotch and the Lyle Lovett station. My basket making friends from down under have finished their gathering and all gone home, leaving me here with this just-started book I am working on to sort of feel like I am sharing in their fun….a way to be “with” them.

So I drew some more weave structures and picked up scraps of paper and cloth to stitch together. They were doing the same with their bits of cloth while they chatted away about what might go with what and their aged, sore fingers from making baskets. 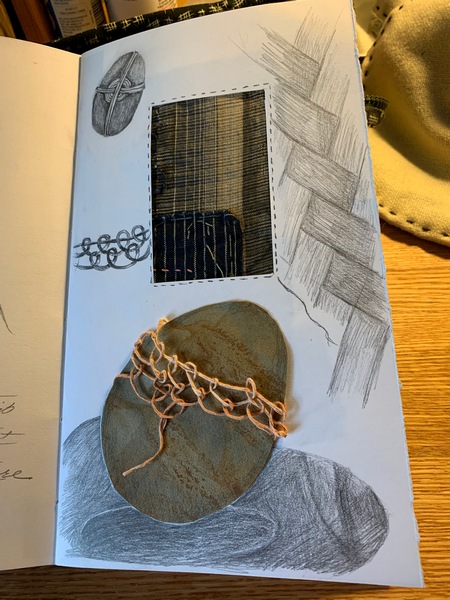 They are on my mind as I stitch odd bits together. A piece of botanically printed paper bordered by a rusted paper piece, a scrap of cloth recently sent by one of them there, a flowered paper from a bar of soap, and a strip of paper made in Claudia Lee’s class.

How do I know when this collage is finished? When is it ready to glue down and turn the page? 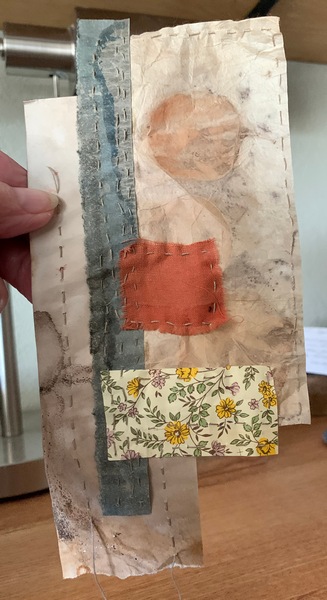 When I picked up the paper from Claudia’s workshop, I remembered what I spent most of my time doing in that class. Here it is as it sits on a shelf in my house, near a felted “journal” page made by Chad Hagen. 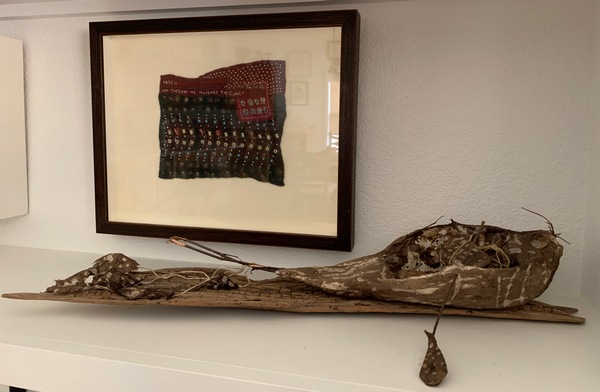 It is a boat I made for me to row away in. With only one oar I was just going in circles with my bundle of belongings. One of which holds a jingle bell to remind me there are happy times wherever I was headed back then. 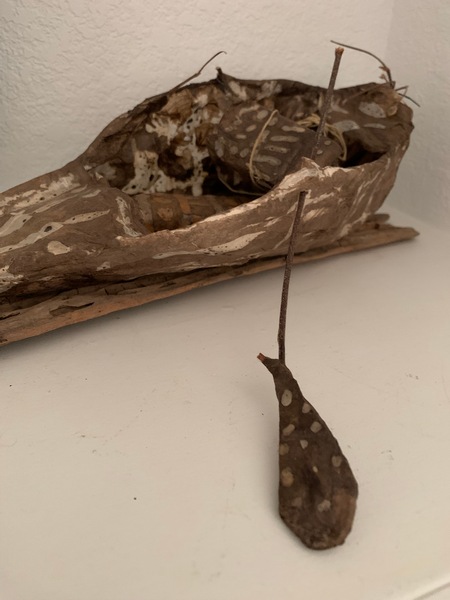 Do other artists put so much immediacy of emotions into their work? I hardly talked to anyone in that workshop and have not taken another since….. four and a half years.

Then when I decided this bit of sewn pieces looked “finished”, it became about how to fit it on the page. 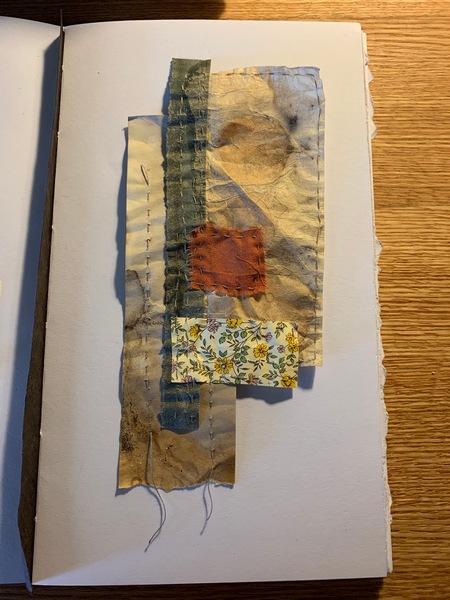 The filler folio did not reach to the top. Would that bother anyone else? I don’t know. But I needed a small stitched scrap to cover the 1/16th” gap. 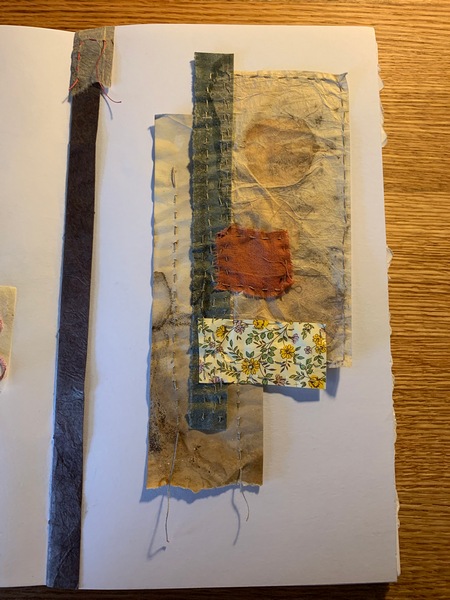 I like this page. So much thinking and remembering and touch of longing went into each placement and stitch.

The scotch is almost finished and the banana nut bread is ready to come out of the oven.

I like this blog. So thanks for hanging in there. You are “the mystery companion” Jackson Browne is now singing about. Thanks.

I should have checked the recipe when I had doubts about 1 teaspoon of baking soda instead of baking powder. The banana bread never rose but cooked itself into a nice solid, heavy but tasty flat loaf. I will take it in tomorrow to the boys. They will eat most anything.

Today I thought it a good idea to use up some chopped onion I bought. So made more scones. This time adding a full cup of those onions and extra salami to my spinach and cheese mixture. 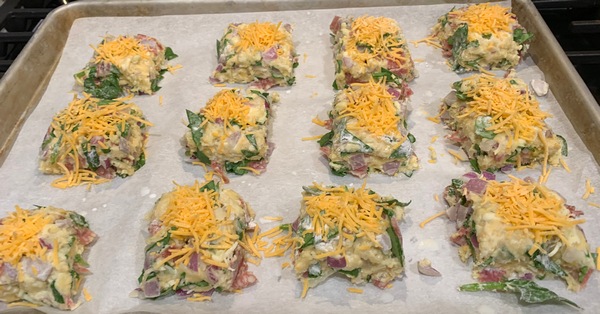 They didn’t rise much either…..there is a limit to how much you can cram into a scone and still expect it to puff up. 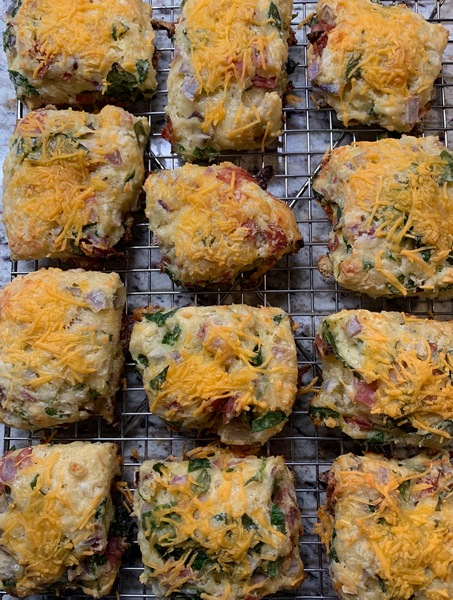 Still a good breakfast or lunch though.

And just a quick return to Lyle Lovett. In a nod to his “Pony on a Boat”, I keep them close together on my mantle. 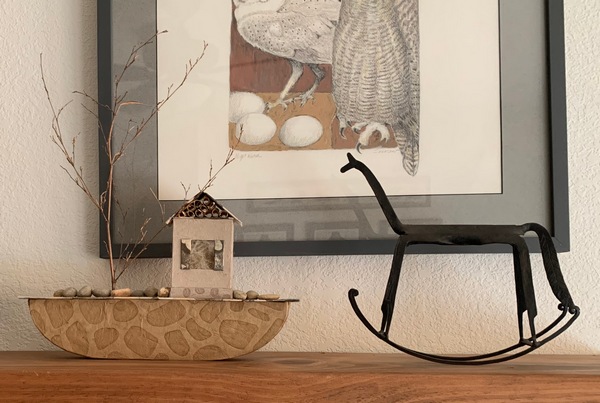 And Australia greets me every time I open the front door. 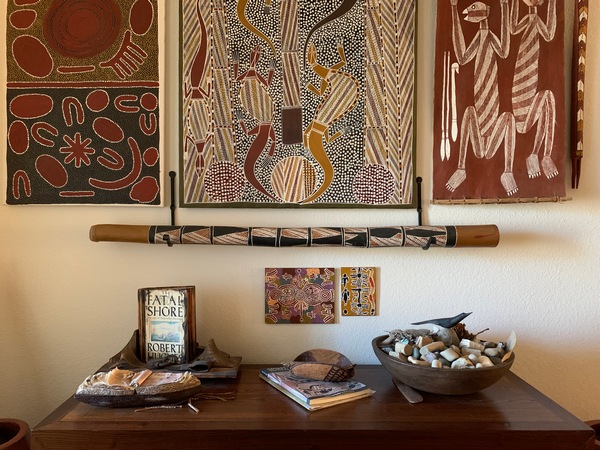