Let’s get the Drawing a Day over with first. 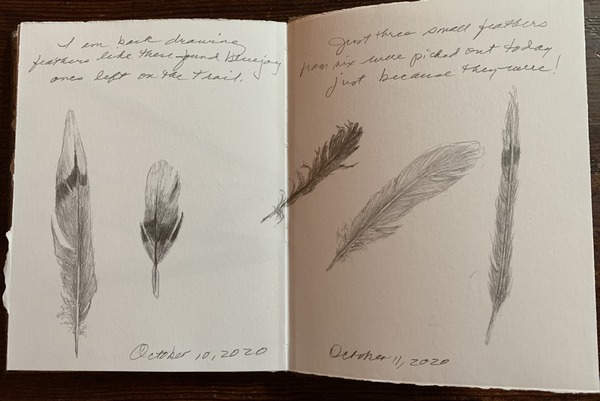 I am back to drawing

ones left on the trail.

from six were picked today

just because they were. 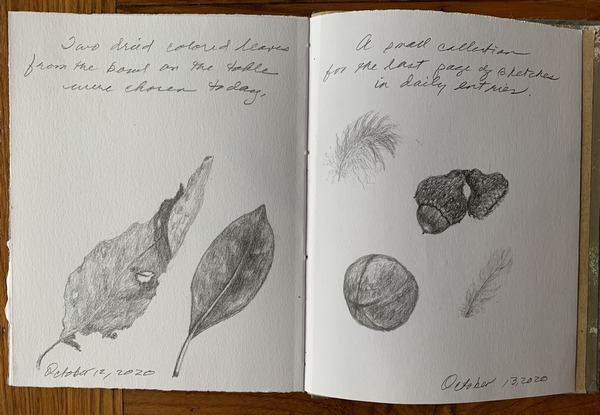 from the bowl on the table

for the last page of sketches

I have now started the last of the books I made to do these drawings and haiku. It should take me to the end of December. I question whether I want to continue with it. It has become addictive but I think I have drawn everything that looks interesting and much that was not. My skills have improved and if I stop do I lose what I have gained? We will see.

BUT the other day I got to thinking that there are so many more sketchbooks I have filled over the years. I photographed some of the pages from several. And one thing I do know is that I lost my confidence using a pen to sketch quickly. Here are just a few of the favorites. 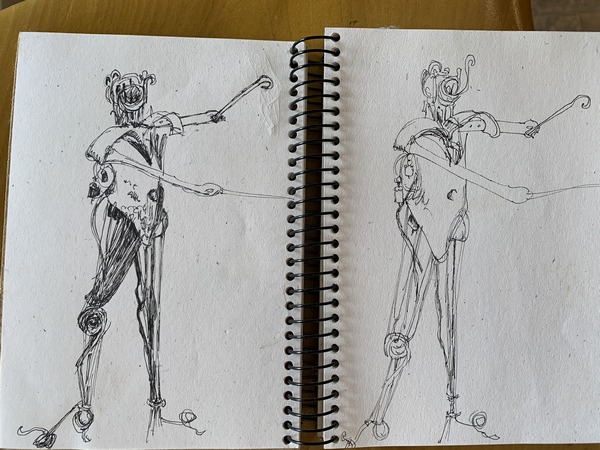 A sketch of a fencer I welded using spare bits of metal. It stood about three feet tall. I loved this and another one I did charging forward. 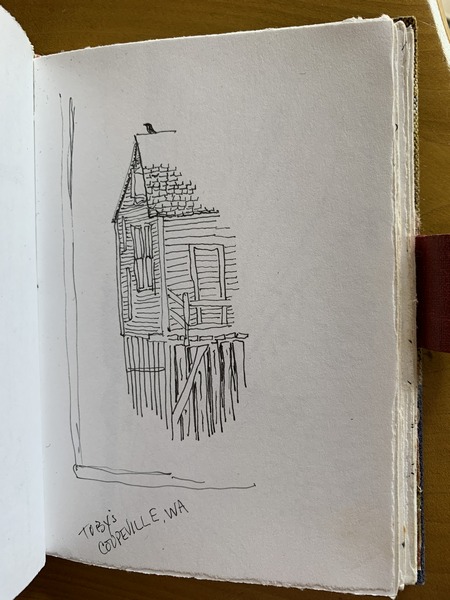 The corner of Toby’s bar in Coupeville on Whidby Island, Washington.  I would often go here for fresh mussels, crusty bread and a beer, It was the first place I heard Nora Jones. 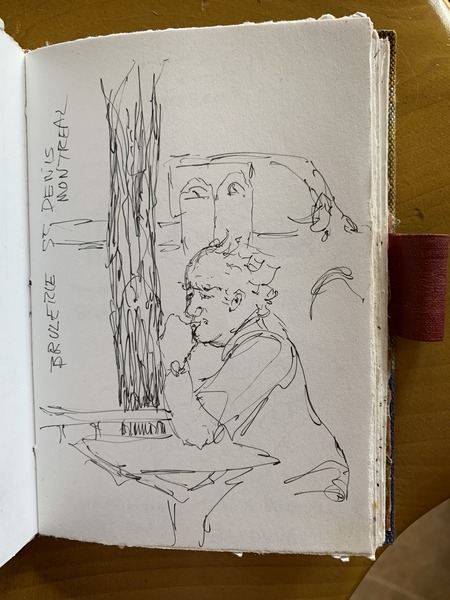 A man at a neighboring table at an outdoor cafe in Montreal where my Canadian friend and I had the best time celebrating our MFAs from graduate school.

I used to be able to just pull out my pen and do these quickly…and if they were “off”, just add scribbles in those places. 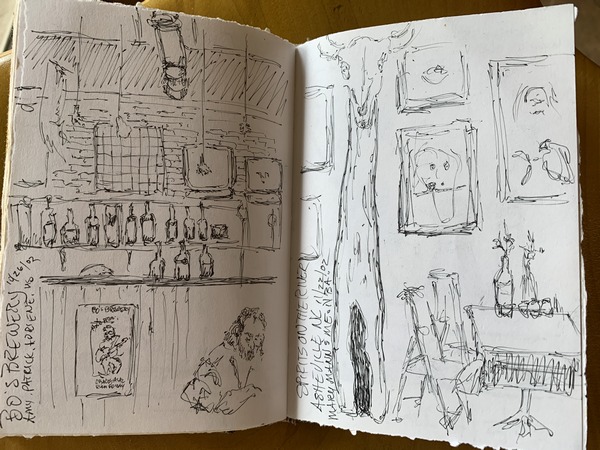 I also thought it would be fun to show the watercolored illustrations of so many of my sketchbooks. 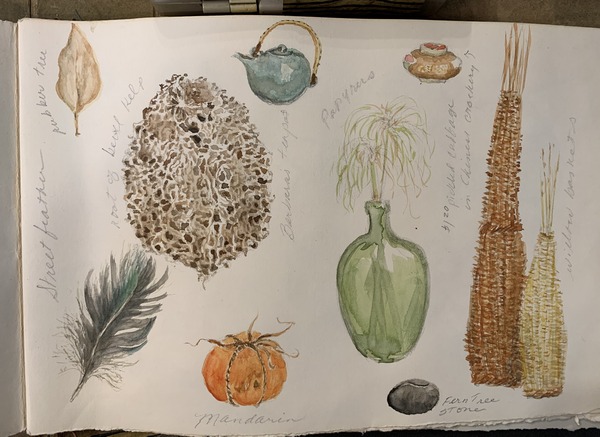 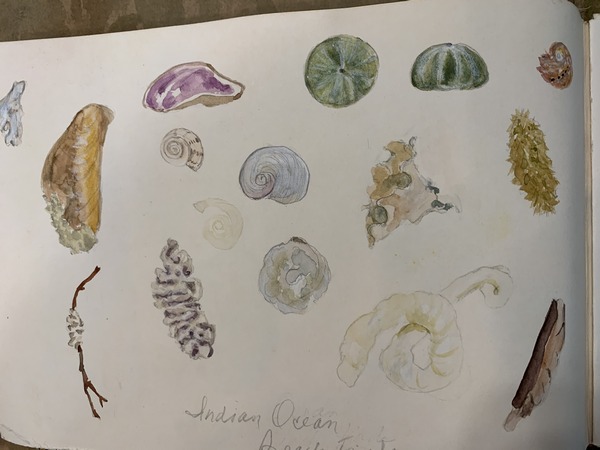 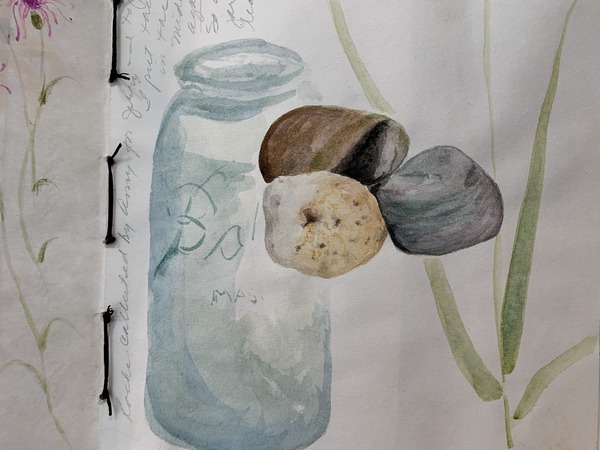 And some books had assorted ways of recording the places, ideas, thoughts…. 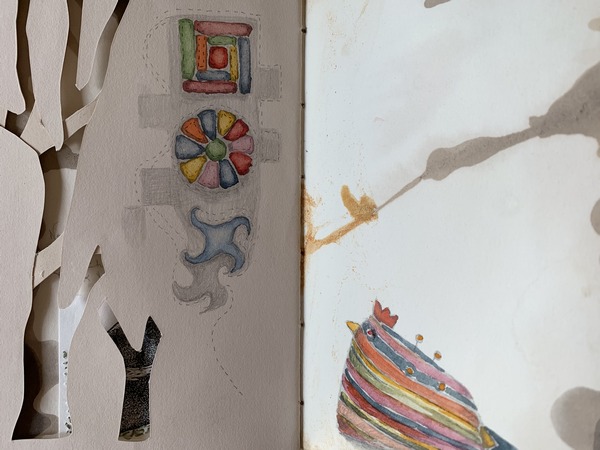 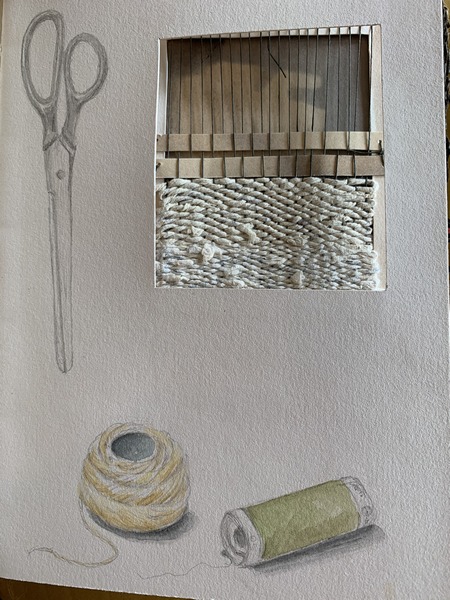 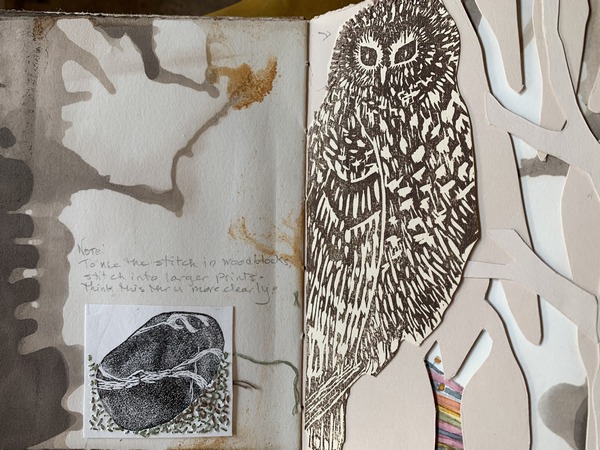 And out of the blue, a return to the safety of graphite and eraser. 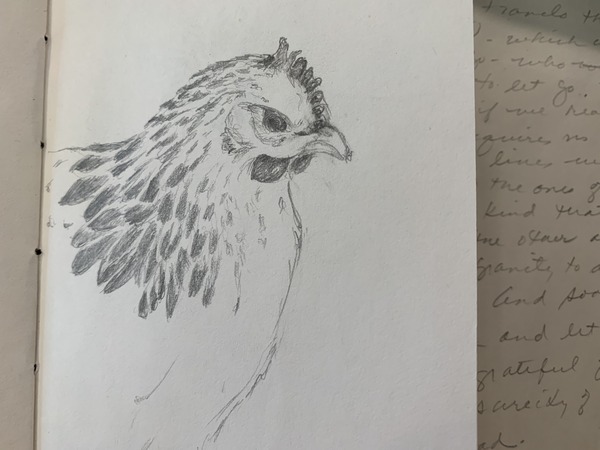 Some books were used as collecting places of objects and information. 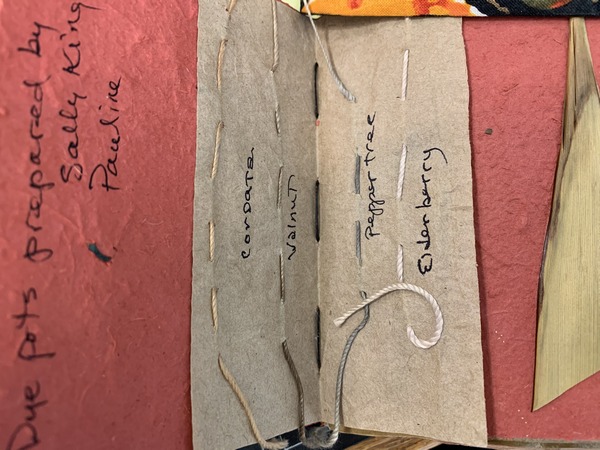 And others like this Artist Retreat Book were secret places for the complexities of being among other artists and egos. 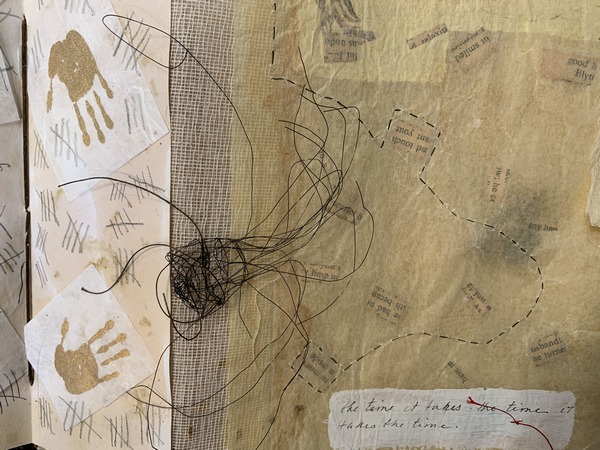 And what struck me while going through these journals were the words written there on pages with and without drawings.

So I am transcribing them in a document titled, “Excerpts from Journal Writings”. And I will use them here as an addition to my usual that seems tedious at times. They are recorded memories of places that have at times led to additional writings of short stories or poems or just phrases that caught hold of something important.

The gardens are lovely – a nice walk – took a few pictures.

What I think I love most about Nature Centers is the decrepit stuffed specimens – especially the birds. They look so dead. Their bodies seem to have shriveled away from their feathers and beaks, and yet there is something almost noble about the way they “hover” on the branches and perch next to their nests – all behind glass and fully on view.

I think I have spotted Mr. Rash. A “bird-watching´ look about him – small glasses and carrying his notes. I am sitting on the aisle behind an Asian couple. No one wants to cross in front of me as long as I am writing. Most people here seem to know each other – typical Highlands, most are elderly and with “means”.

The stuffed birds and I watch. I might add that the large black bear on rollers has been brought out to face forward like the rest of us.

They could use better backgrounds on their dioramas.

He opens with the last line of a poem, For the last Wolverine, by James Dickey, author of Deliverance.

It will be a sad night of commentary on the fragility of our world. And a stuffed bear may have just nodded in agreement.

I was happy to come across this in a journal that also held pages of how it felt to teach a two week workshop at Penland….a dream come true. I like that without putting much thought into something, I just wrote in the moment. By doing this it all comes back…the scene, the smells, the sounds.

So each blog will have something besides just me, Lee and what I may or not be working on….but something from back there, somewhere, from my bag of past experiences.

So here is a good illustration of what I am talking about.

Remember the installation artist Nick Cave? Well in the year 2000 I volunteered to help dress his dancers for a performance. I quickly sketched in pen the movements of the dancers and the costumes.

Then when I returned home I wanted to capture that memory in a book form. Nick gave me two pieces that fell off a costume and I used them here on the cover of the book I made. 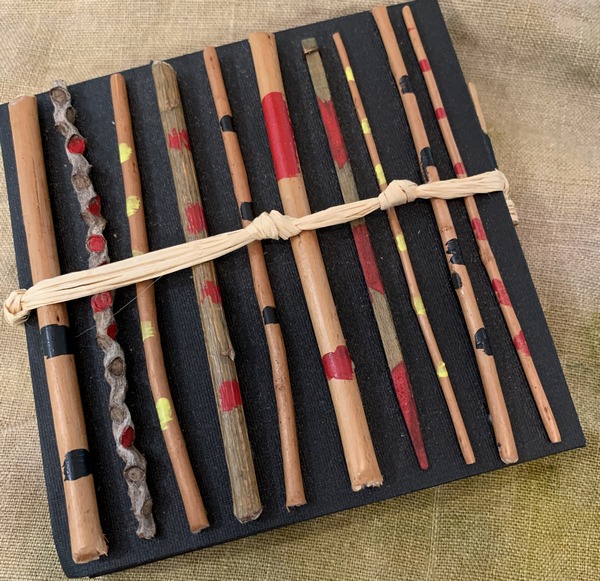 This is one of those pop out constructions that captured the movement of the performance and gave me places to stick on additional sketches to float in front of others. (One thing I learned in John Risseuew”s class in 1994 was you shape the book around the content.) 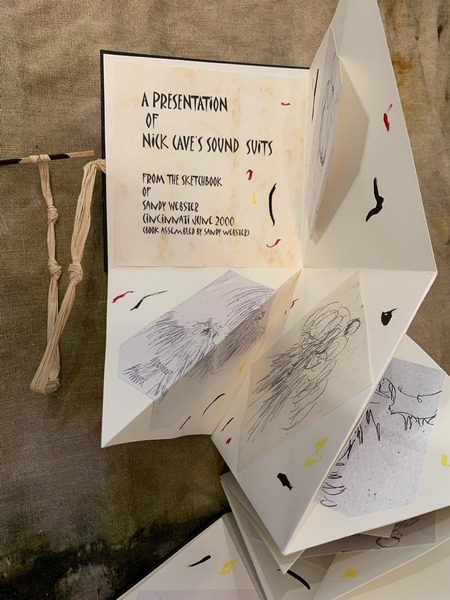 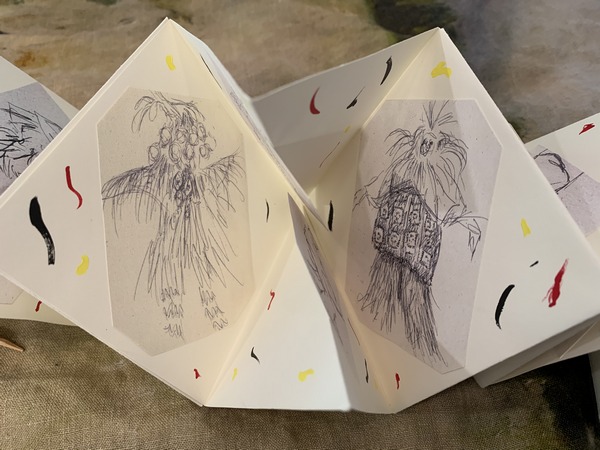 I made only two of these, one for me and the other to send to Nick.

Not long after, I received this gift from him. He and his partner had a textile business in Chicago and he used some of the cloth they designed to fuse to this large hard covered blank journal. A lovely devore of velvet. 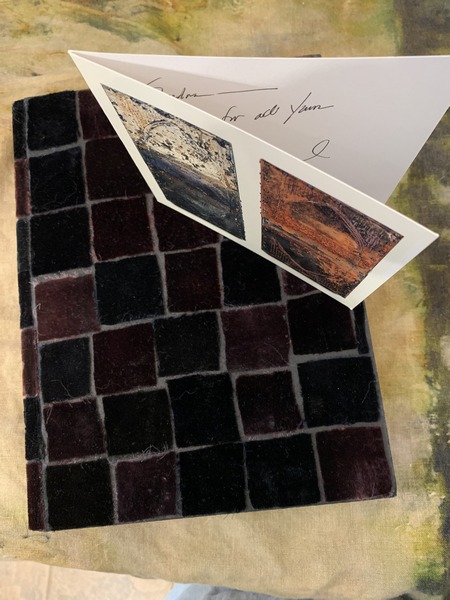 Of course I wasn’t sure how or what to write in the book….too precious and all that.

Then I bought a book on how to write by author Elizabeth Berg. This small paper back was filled with timed prompts that had an appeal. I had no problem setting the timer and getting it down. Nick’s book was used for that and will be again because there are just way too many empty pages left in it.

Here is just one of her many writing prompts.

A smell coming from a restaurant – memories – stream of consciousness writing – what is it?

I smell pancakes – buckwheat pancakes! They make me think of MomMae and the farm kitchen of Nate and Myrtle, and Freckles, the springer spaniel with his head just under MomMae’s hem. If he can see no one, then no one can see him…a very dumb dog waiting for leavings, droppings from spatula to plate. I’d like to go back once more just to see and smell and hear all that again. That twangy music on the radio, something about geese flying away, the pancakes, the melting butter pushing syrup over the edges onto the plate.

And then my time was up. But how wonderful of Ms. Berg to make me remember all that. As for the author, I think I looked her up and saw she wrote more romance novel type things, books I likely wouldn’t read, but her guide book for writing remains one of my favorites.

So thanks for staying with this so far. I will stick more writings and more pictures in as I go.

Now I am going to transcribe more journal entries with the time I have left today. But before I go, here is a sample of my winter’s way to spend time with Lee while watching television. I was inspired by the charming embroidered scraps of cloth by Ann Lamb. This one is stitched into a contact print on heavy paper done on my last trip to Australia. 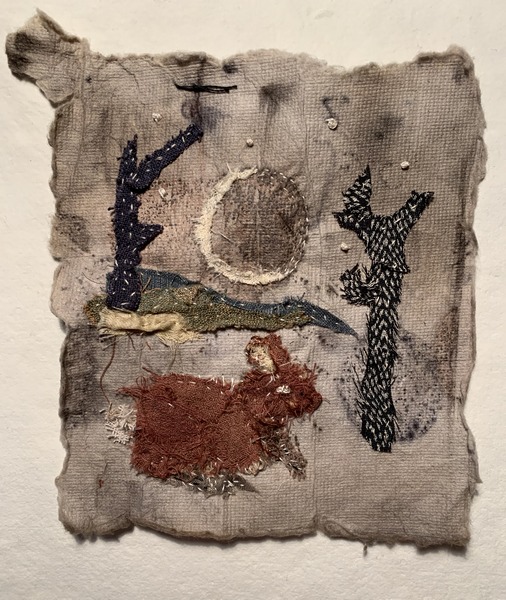 And this morning Lee and I unwrapped a previously unsuccessful contact print of our leaf collecting. This may dry to something useful. The bit of muslin holding these strips of paper is also drying. 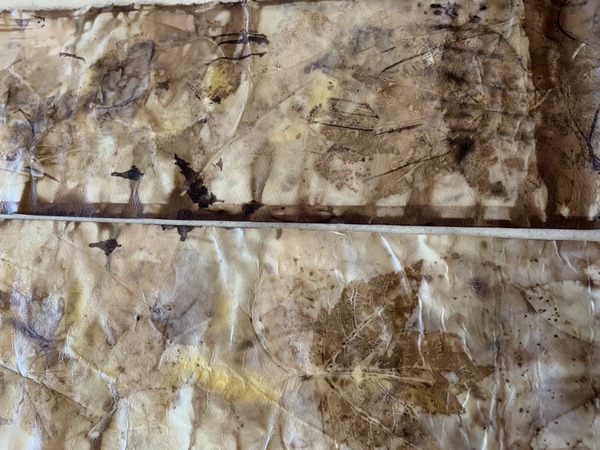