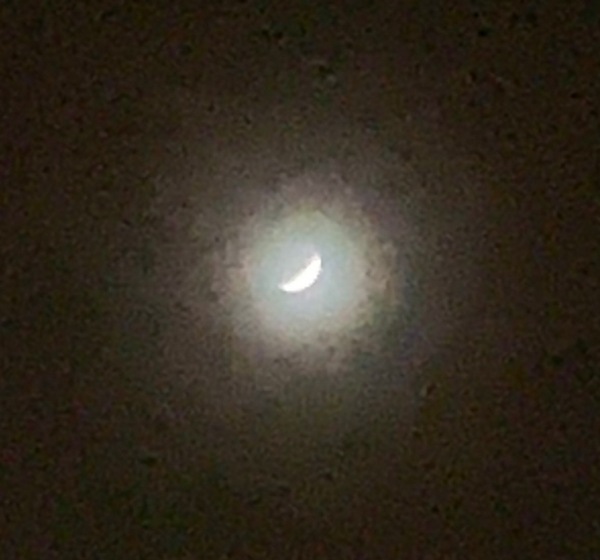 I woke at three to be ready at five for the lunar eclipse….another blood moon but with the fog preventing the warm glow of the previous moon trapped in the Earth’s shadow. I don’t know why I think it is so important that I watch this phenomenon. Maybe because it will not be til 2025 when this happens again.

A nice walk to the river a few days ago. 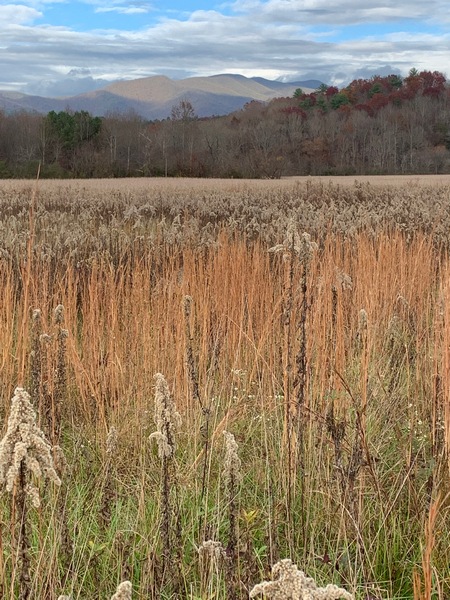 Five minute walk from my house and I am in the thick of it. 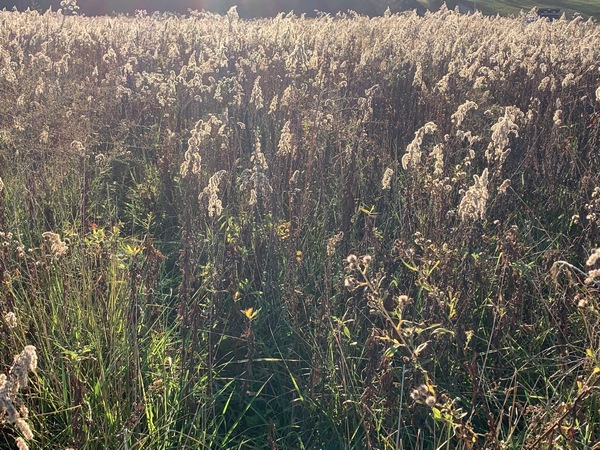 And yesterday the road past my house was paved. 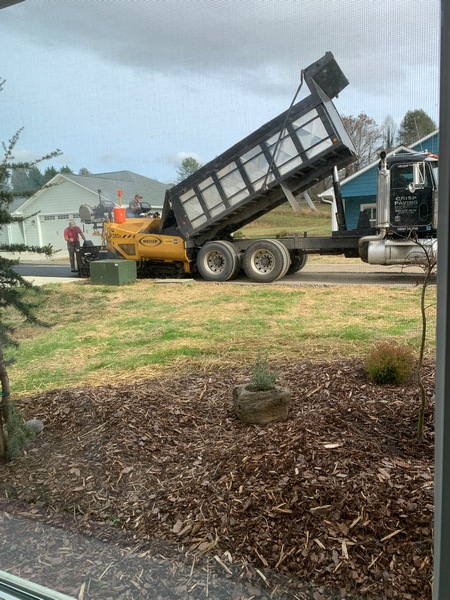 Two days ago I had finished up my crow wood block. It was less than anticipated. So I have put carving aside for a bit until I get the studio set up.

But I needed to get caught up in something…SOMETHING! So settled down to drawing assorted animal heads to clothe in stitched cloth. I liked the bear best and decided to start with him.  Also a bear has been seen not far from my house coming down from the hills beyond.  I couldn’t resist a couple of paws coming out and a worried look on his face. He might not like that winter is coming and bundled up. The bits that are drawn cloth (shirt and scarf) will be finely stitched cloth to finish clothing him. He makes me smile and I am anxious to see what a fox might be worrying about. And on and on…. 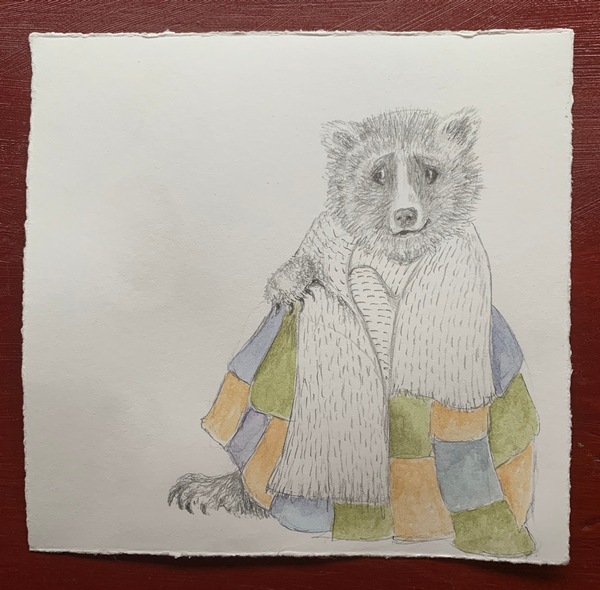 The drawing is on a six inch square of paper. Years ago I did a series of small owl heads with a partial moon in a deep blue sky behind. I am now thinking that I need to get those old wood blocks back out, print them and then clothe them from the neck down in finely stitched patchwork robes. A loosely tied cord around some fat middles. Anyway I am ready for some good fun and silliness coming off my pencils.

This morning I went to the big home supply store to get base cupboards for the studio that are counter height for the table top Patrick is making and will bring down at Thanksgiving. They are unfinished solid oak and I bought the side panels to cover that ugly board on the ends. One of the cupboards is 18″ wide and holds three drawers 24″ to the back. The other is 24″ wide and the same 24″ deep with one long drawer and a cupboard door down below. A great space for fitting the sewing machine and the XCut XPress die cut/etching press and beds. Marla will hang the pictures on the walls in the studio and we might add a shelf for artwork.

When I arrived home this morning a delivery person came shortly after. She had to hand deliver my package of a book shipped from Germany. It is the original woodcut images of Olesya Dzhurayeva in the Ukraine. She is a printmaker living in Kyiv. The images of her work through the printmaking groups I belong to on Facebook spoke to me like no others. These are from scraps of wood from her war torn surroundings inked with the black soil of her home.

When I saw there was going to be a small edition of this book, I contacted her to see if I could purchase one to not only help support her, but more importantly to have and hold these images.

It is hand bound in a clam shell box about 10″ by 13″. The colors of the Ukrainian flag are on the inside covers of the clam shell box and the book is covered in a “bitter chocolate” brown cover material from England. Three languages are opposite each of the six prints. The whole thing simply takes my breath away. I will say that Olesya has been in several printmaking exhibits in Europe since her work has become more public.

Here are some of the images of the book. The box. 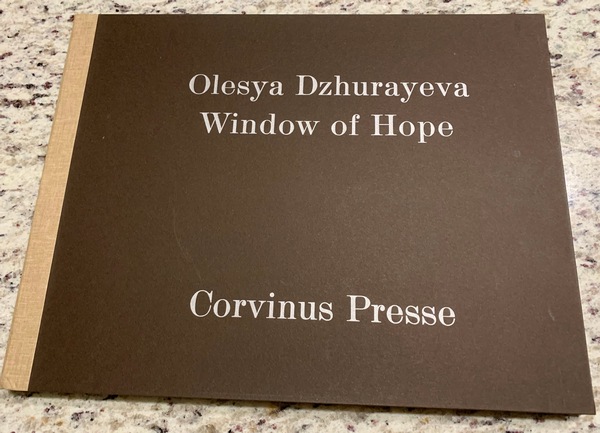 The book cover with the image that first caught my eye. 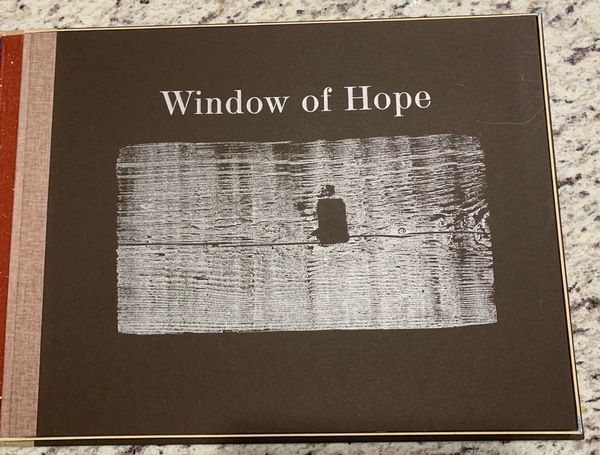 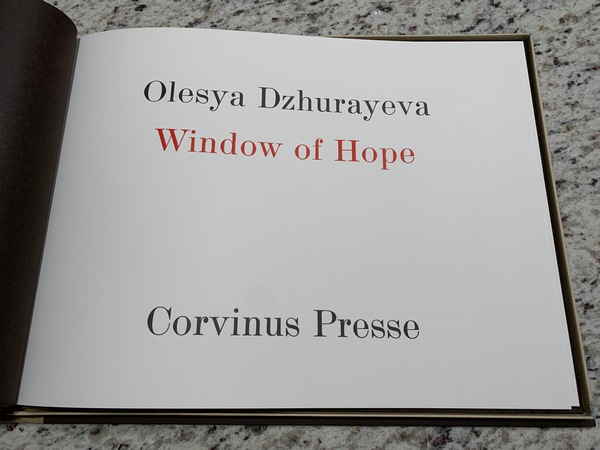 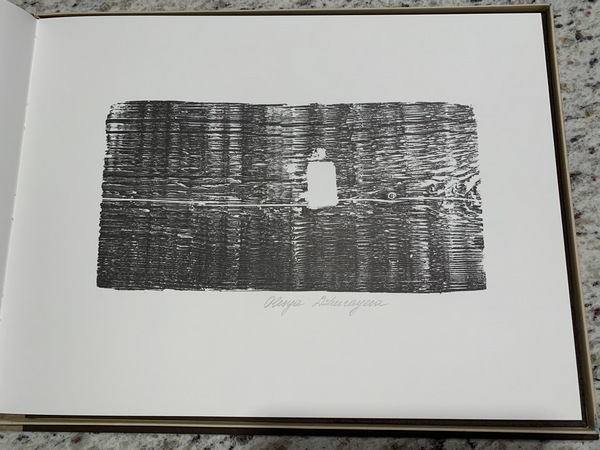 And the English text between Ukrainian and German. 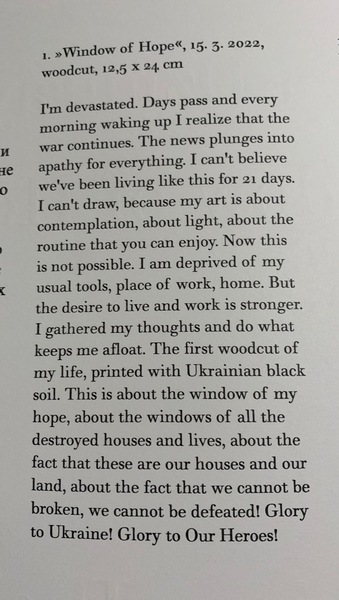 And how fitting that her words come today. The day Russians are routed from Kherson and the beleaguered Ukrainian soldiers are greeted so joyously.

Now I need to drop her a line to say that her inspirational work and words have arrived.