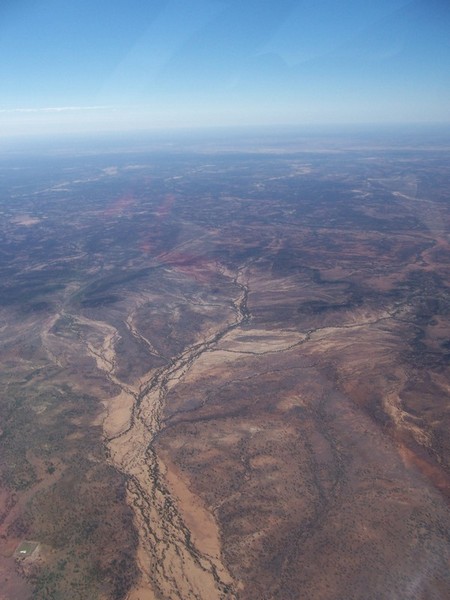 Australia is a beautiful country. I love how it looks from a low altitude.  The pilot who took me out there ten years ago still heads into the outback. Mike and Fay just sent me almost endless images of their recent excursion into the dry harsh land. It is inspiring to see the intrepidness of those two and their traveling companions.

Packing for precautions seems to be the most serious preparation. Towns are few and far between. Red sand must work its way into everything you put on your body or plan on eating. You have to be born with a desire to do this over and over again. When it was just Mike and I in his plane we found pubs/hotels to stay in and if I wanted to enjoy the magnificent night skies of Australia, I only had to step outside the door. They think it is better seen lying in your swag on the red, red dirt.

The reason they wanted me to have the pictures of their trip is because some of their destinations  were the same as Mike and mine. The Dig Tree still stands along the Cooper and reminds all who make their way into the area just how hard traveling across Australia can be.

I have a student in Australia who recorded her outback trek by keeping a pen on paper as they bounced over the track. She turned it into a long, long landscape book of just that line with marks of where stops were made for fuel, food and rest. It records the time, distance and difficulty of going into the outback with very few words.

I have been working on the map to go with the fourteen small bound journals and coptic stitched pigments pages.

I started with a large piece of kozo paper and a National Geographic map that a friend gave me. 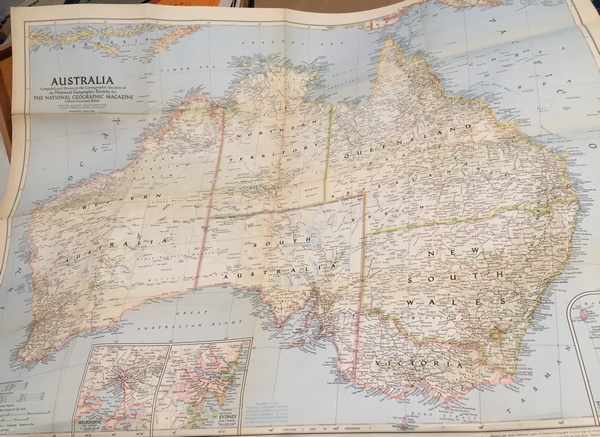 After tracing around the country, I colored it in with watercolors made from the soils of Australia. Then I used a fusible bonding on the back to stiffen the paper and make it more durable. 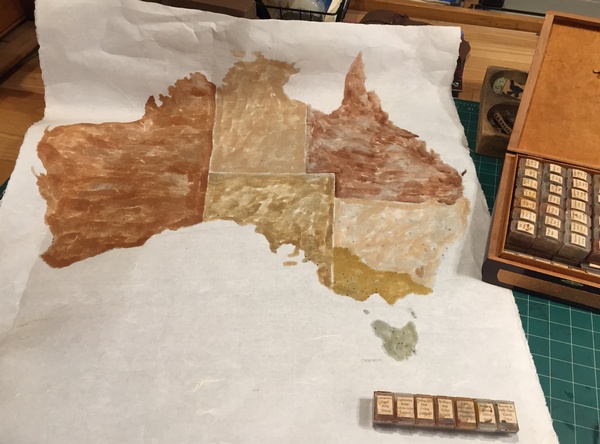 Each state or territory was painted a different color. And when they dried lighter than in this image I wrote the name of each like they were on the original map. Then marked all the places I visited with a brown dot. 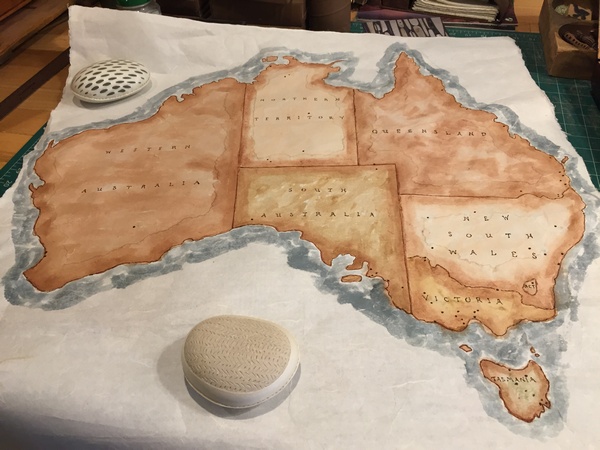 I did a bit more shading and made sure to color around the country with a blue paint so it would be obvious that Australia is an island.

Then I connected the brown dots with tiny white travel lines. I wanted to use my pigments from here in North Carolina to mark my travel lines but they were too similar to the Australia land colors. 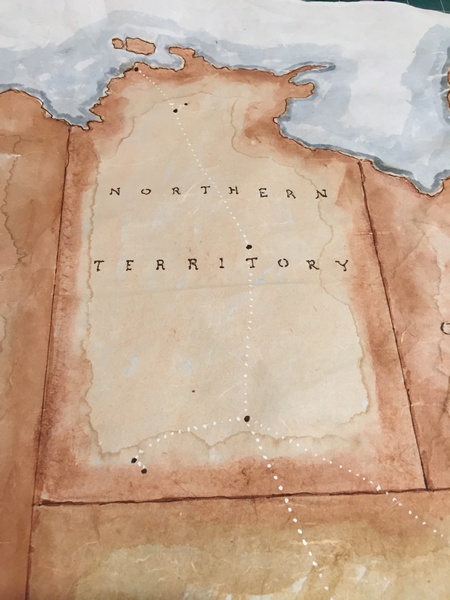 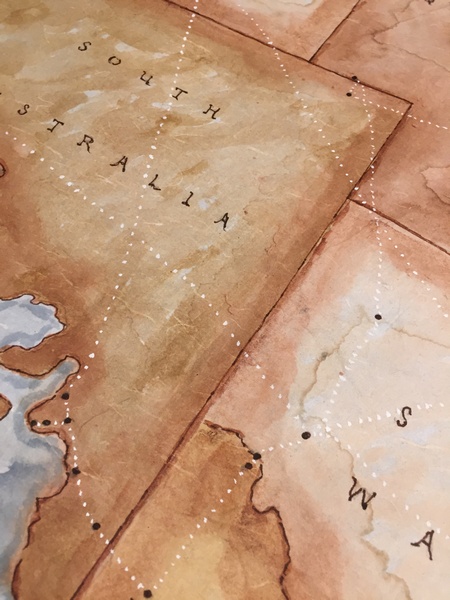 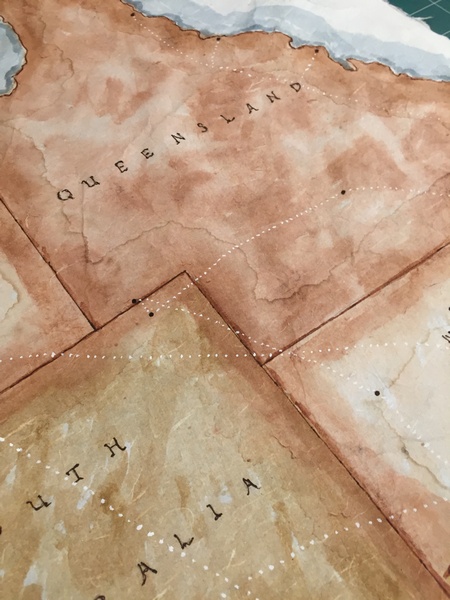 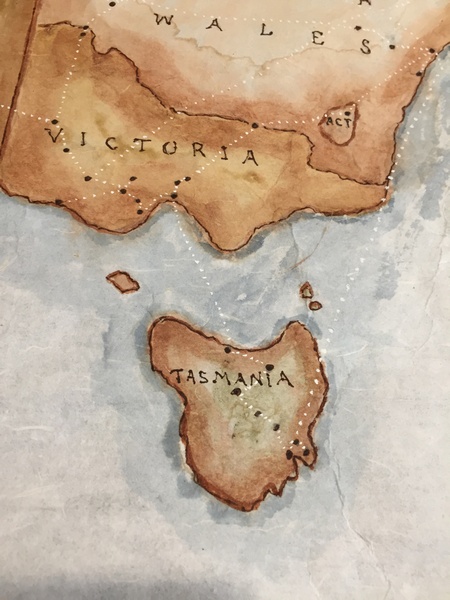 There was not enough space to write the names of the places so I just stayed with the brown dots.

Then I waxed the entire sheet with paste wax and buffed it the following day. 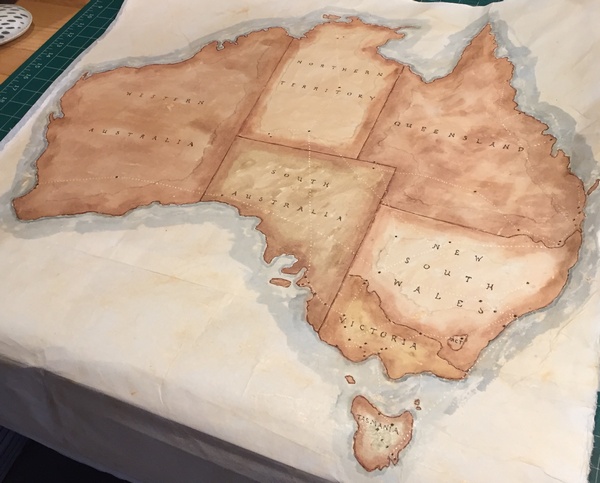 Now I have the problem of how to back the map and fit it into something with the small journals and pigments pages. This piece of rusted fabric will likely be used to back the map and/or cover the satchel that holds all the pieces. 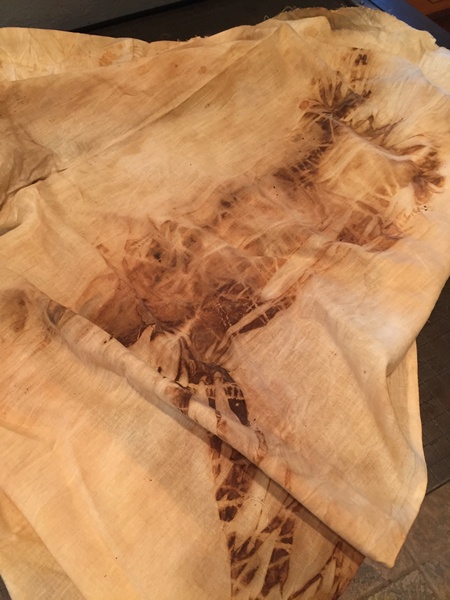 I am considering wetting this fabric and sticking it to the large glass door and slathering it with corn starch and sticking the map to it. The result might be too stiff to fold up, so maybe not. But I could sew it to the back like the one below was done. Just put right sides together, sew around three sides, pull right side out and hand stitch the last side. The map might be more flexible that way….without the added layer of paste. 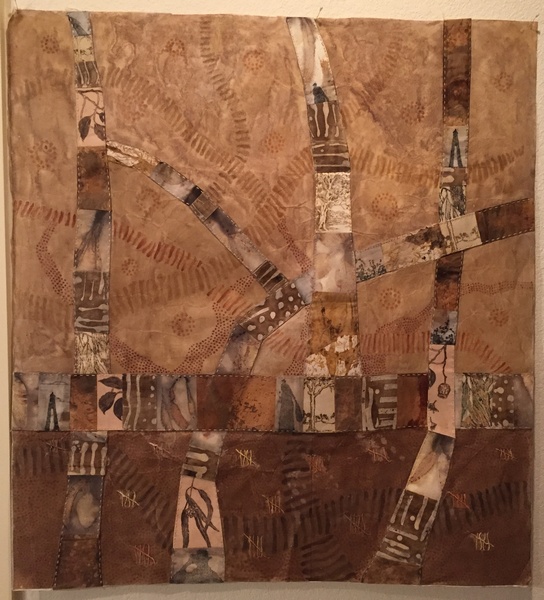 What I think I would like is to fix the center back of the map on a bit of covered board and then fold the sides, top and bottom into a bundle holding the other components. I like how the fourteen small books just tumble into a pile some opened, some closed. And the pigments book looks interesting any way it falls. 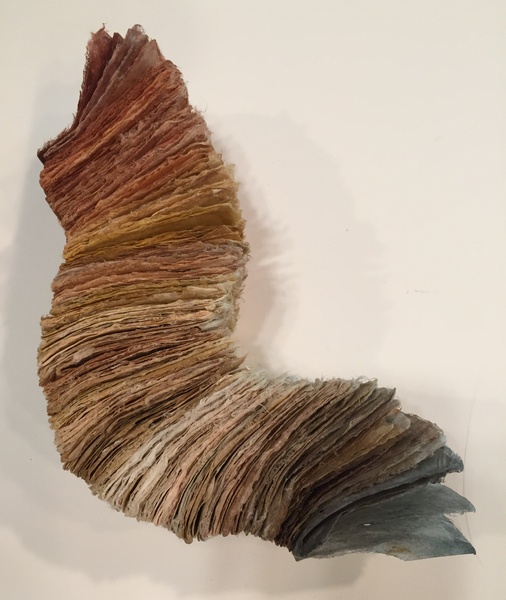 I may have to think on that for a bit and for now concentrate on how to fold the map.

This week my new watercolors came and I added them to the paint box. No more watercolors for me. There is enough here to make any color I want. 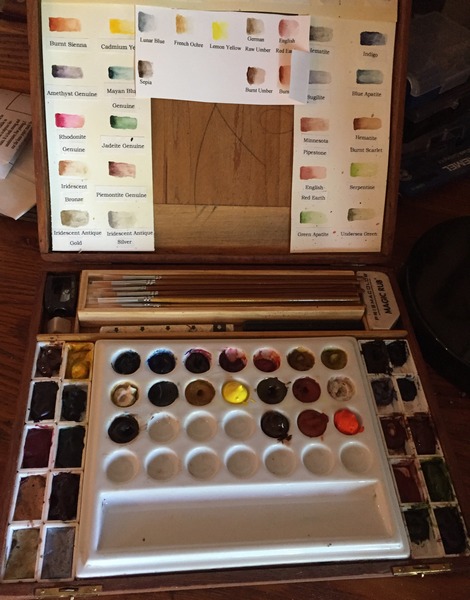 I also have a whole new set of tiny brushes.

Anyway that is about enough for now. The other thing I wanted to talk about can wait til next week. Our son is coming to spend time with his dad and me and I am hoping to get away for a day and night in Asheville while he is here.