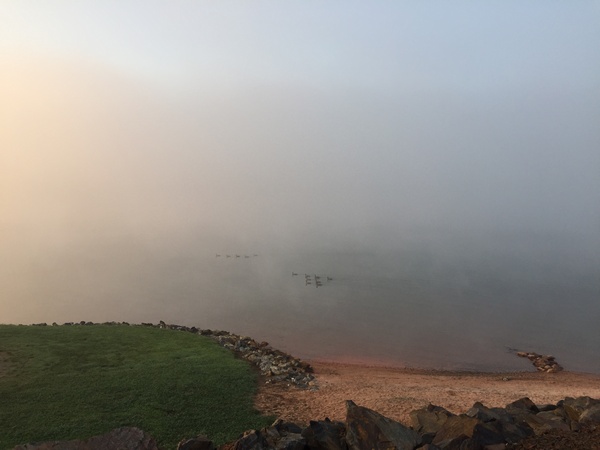 This morning at the dam watching geese swim into the fog. It is cooler. We can sense the fall approaching.

I am thinking that it is time to find something different to wear to the gym. Every Monday through Friday for the past few years I have put the same thing on. An old large black long sleeved tee shirt and some indestructible pants that were dyed with mollusk shells in Tasmania, then over dyed with rust. It is getting tattered and I think the others working out in their snazzy outfits wonder if I even own other clothes.

It makes me feel “Australian” to wear things til they tear and then mend them and wear them some more. But I think it is time to go through the closet and find something different for the gym workout. It won’t be new. It won’t be those workout tights that look a bit silly on a bulging older woman. It will be something that fits on the shelf in the closet where I reach in the dark at four in the morning. It has to fit in one hand while I hold the iphone to see where I am going. It has to be comfortable and has to have had a previous life as something I wore almost to death in a daily studio practice. But it can’t look messy. It is hard to be comfortable and not look homeless at my age.

I have gone a bit slack lately. I noticed when I wanted to put my earrings in that the right one wouldn’t go through. I suppose the ears close up if you don’t go somewhere with earrings hanging. But I shoved it in and decided to at least once a week, put earrings in to wear around the house. It seems like a small thing but making meals and cleaning up afterwards wearing earrings make me feel good. A practice I can hold onto.

I also decided to wear more necklaces….not for doing dishes….but just have them handy in case the neckline of a shirt exposes too much of a neck and chest that didn’t look the same just a few years ago. If I really worked at it I could be like that grey haired old model that shows up everywhere in her arm bangles, piled neck pieces and over-sized glasses. I bet she needs a person on each side of her just to get out of a chair. I don’t think she is vacuuming in those outfits either. Something about aging makes us just want to keep piling things on, cover things up. 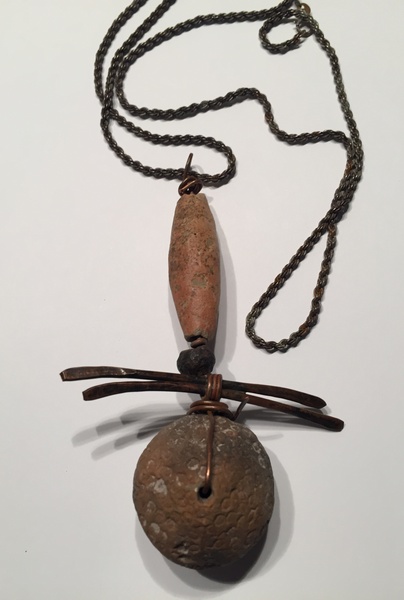 I found this in an old jewelry box this morning and wore it to the brewery for lunch. There was no one there but us and the fellow who makes the beer and owns the place. His wife and he have politically conservative leanings. When we got there the fellow had Fox News channel on. Lee asked what was happening as he looked at the screen. I told him it was Fox and therefore could be anything but actual facts and the channel was switched to the national little league finals. I asked if there were any girls on the teams and was promptly told the teams were for “boys only.” To which I replied that I thought we were past that.

I left a large tip for putting up with me today and think I will keep opinions to myself from now on. It is good beer, a cozy place and we pretty much have it to ourselves at eleven in the morning on Thursdays.

And really, I worked out some of my political aggressions by making four anti-trump books this week. I posted them on facebook but will show them here as well. 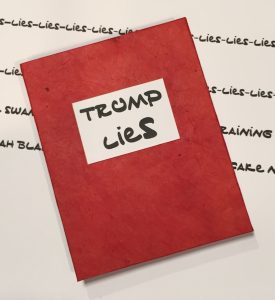 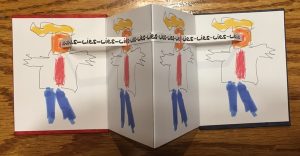 The lies continue to run in and out of his mouth. 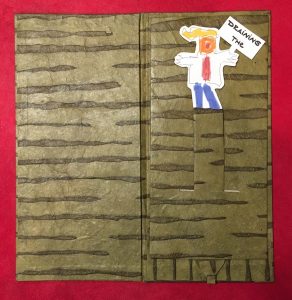 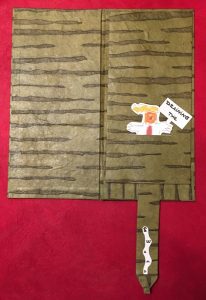 He drains himself in the swamp. 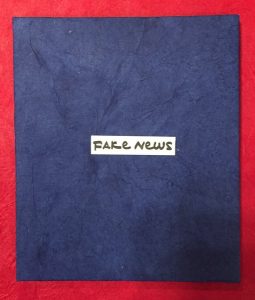 He watches himself on Fox (Fake) News and repeats everything he hears. 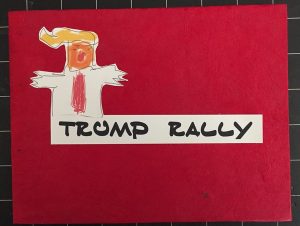 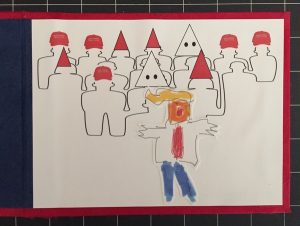 And his rallies have to attract some of the most non-thinking people ever!

Back to old clothes. About fifteen years ago I found some Egyptian cotton at a local barn sized place that carried factory remnants. I made some pajamas. Last month I had to throw out the bottoms and today I saw that the top not only had a large hole under the right arm (it was how I knew which way to put it on) but the sleeve had actually worn through. Just threads in one direction only. I can’t throw it out. It would make such good patches for something else.

Is it an age thing? Not being able to let go? Maybe it is just me.

I am going over to the studio across the hall and pick through old jewelry and carefully fold that old holey pj top up and put it with other old bits. I am going to put away all the red white and blue papers and think hard about what to do with the small leather journals.

Art group comes this weekend and I need something to show besides these anti trump books. They (the art group) are not as politically, socially, environmentally driven as my fellow students in undergraduate and graduate school. Maybe it is the times we live in….sort of a state of partial exhaustion. Little room for passions that demand attention and production.