This one has very little to do with our daily lives here. I will say Lee seems very satisfied with his new friend, Dillon. This is his second time here and they both keep busy moving rocks around. When I pulled in the driveway from picking up groceries Lee was on the lookout for some men who took things and needed straightening out. I said I did not see them but assured him I would take appropriate action if I came across them. I do wonder who these bad guys are and how he sees them. I only hear of them when he comes to report as best he can what they are up to…nothing good, I can assure you. There is a poem in the Trusting the Tether Line book that I can’t remember if I posted earlier…so will do it here.

Other people are living here.

I look out the window.

That’s how these strangers

get in the house

and take up residence.

not the dark of night,

Then they show up.

not just them to leave,

but the one remaining

that they are gone.

They are now coming around on sunny days and often move around the property taking things. I would love to tell them to stay away but I have come to believe they are needed to blame for things missing. I will find them useful for some of my own forgetfulness.

Anyway on the question of ethics….and I really do not know why this bothers me to the degree it does. I read a facebook post from one of those “friends” you accept because you have something in common. He was reliving his life on facebook as a way to document it. That in and of itself seems a bit self indulgent. But aside from that one of his latest “chapters” was him as an artist.

He had no problem naming a professional artist whose work he copies and then publicly discloses the cost of the artist’s works only to let the public know that his are considerably less expensive. I could not just shrug this off and move on….it bothered me. So I asked in the comment section if he thought there was an ethics question with his behavior. His immediate and simple response was, “I do not.”

Of course, I am sure that because he mentions where a customer can buy the professional’s works, then he is doing that artist a favor….promoting his work. I think he is only promoting himself because he can’t wait to add that all of his own works have sold so far. There are others in the comment section not only feeding into this but asking to be notified when there is more of the less expensive copies available. Someone even asked if he was going to teach this technique.

In this age of “me first” I wonder if there is not a curve we have gone around that leaves ethics pushed aside for the sake of self aggrandizement. We seem to be in an age of “So what”. “Who cares?” And I am left wondering if anyone does care.

It takes its toll. I used to be friends in real time with someone who painted from someone else’s extraordinary photographs and then successfully sold those works. It is work to develop one’s own talent and vision. And we live in an age of instant gratification…often on the back or cost to someone else. And I get that we can be inspired by others and follow along when we address our own canvases. But when it comes down to making money off those influences by copying, a line is crossed.

So with that I will step off the soapbox and show some fairly lousy pen drawings in my Marks book.

Fun drawings of boats on indigo.

A visual contemplation on lousy handwriting. Maybe, just maybe I should have spent some time in a calligraphy class.

And I have a follow up today on my soapbox from yesterday when I started this blog.

This morning I read on the “friend”s facebook page where I posed my question about whether he felt what he was doing was an ethics issue, a reply was posted from someone who wanted me to know that artists consider copying the sincerest form of flattery and copying is how the very best artists learned their craft. I responded that I did not think that artists who have spent careers developing their signature work only to be copied and undersold would agree. I also said that there is a plethora of writings on this subject and the sad thing is that there even needs to be.

I wondered why I was not getting a notice that more comments were made. So I went to the page only to find I have been “unfriended”.  Probably a good idea.

Today in the mail from my daughter I received the tin box of 12 Derwent Graphitint tinted watersoluble graphite pencils, two boxes of three each Derwent permanent line makers in .1, .3, and .5, and three Cretacolor graphite watercolor pencils in red, green, and blue….all HB…they are very greyed down colors….perfect. I will try them out in my marks book.

We walked on the trail this morning so I will leave you with a picture from there. 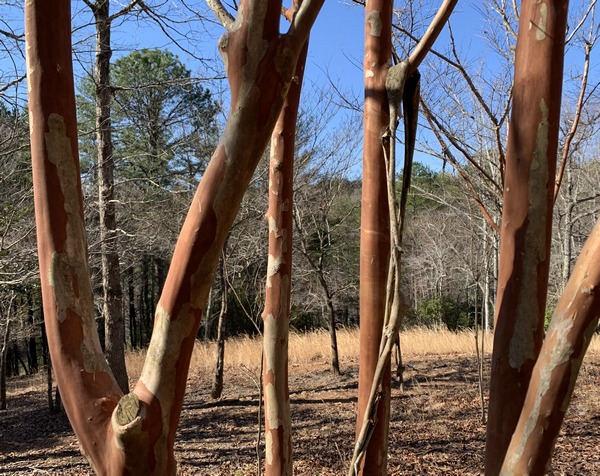