In the Marks book I am looking at stippling again for the next book, Sticks, Stones and Bones. It takes quite a bit of time and color doesn’t look right on the drawings. I also tried out my new watercolor graphite pencils. They are soft enough but rely on a watercolor brush to get the color moved around the right way. And the brush needs to be tiny for the drawings I want to do.

The next double page in the book is drawn in with parallel marks.

Then the colors added that took away from the marks.

I am going over the sections and patterns with a Uni Ball Vision Elite fine which is my widest marking and permanent pen. 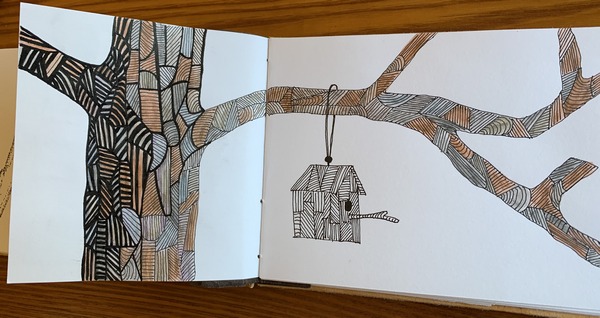 My capabilities are a bit limited when it comes to 2 D works unless it is graphite with eraser handy or acrylics with scraping and layering over the bad parts to make them look better.

Oh well, I hope this does not mean I have reached my limits in the Marks book. But I do have to say that the clothes and shoes pages are my favorites along with the landscapes of lines, dots and bunny/bird/nest. I might have peaked earlier on.

I was listening to Pandora on my Iphone while drawing just now and heard this old song from Bob Dylan….Girl from Red River Shore. The main person (Dylan using his voice) asks the girl from Red River Shore to marry him. She replies, “Go home and live a quiet life.” Isn’t that the kindest rejection for marriage? She could simply be saying she is not an easy person to live with, rather than for him to get lost. To which he claims that now he is “wearing the clothes of misery.” I just had to write those two lines down…..”clothes of misery”…..isn’t that a good way to express a state of sadness? The poor guy is now bereft…another favorite word…bereft.

Just a side note here…it is hard to tap your toe and be bereft at the same time.

It has taken me awhile to get into my second short story but once I realized the main character was not a young man but considerably older, AND what his tattoo was an image of, it is going easier. Sometimes you just come into their lives at the wrong time and they stay silent….now he is easier to get to know.

Here is the opening paragraph:

Charlie turned the coffee on and looked out of the kitchen window. The sun had yet to break the horizon when he began to stretch into his tai chi movements. His bare feet gripped the tiles as his body flowed into the first movement with a long inhale if breath, slight pause, then turned into another to exhale just as slowly. Lowering his left arm to flow into a third position he paused to stare at the tattoo just below his elbow. It marked him, made him feel branded, and forever connected. He raised his fingers to his lips before gently laying them against his arm.

Coming Home is the working title and gives me some direction. Also the kitchen is an important location of each story. That keeps me from bouncing around too much. I might reword some of the opening but it will mostly stay the same. And once I saw the tattoo so clearly and wrote what it means to him, I thought I wanted one just like it. Never wanted a tattoo before…Now rethinking that….

I am going to get out of this dining room chair where I am sitting. They are so uncomfortable! Since Covid, the one person who has sat in the chairs as company throughout the years, and now comes for lunch to give me someone to talk to and visit Lee, said, “I need to move into a more comfortable chair.” No one ever said they were that bad before but Covid has brought out a much appreciated honesty in so many of us. I am going to try and find a person to reupholster them…the counter stools as well. All of them I covered myself and thought I was so clever at the time. Should have read up on what type of foam to get. Always learning things a bit late, aren’t we.