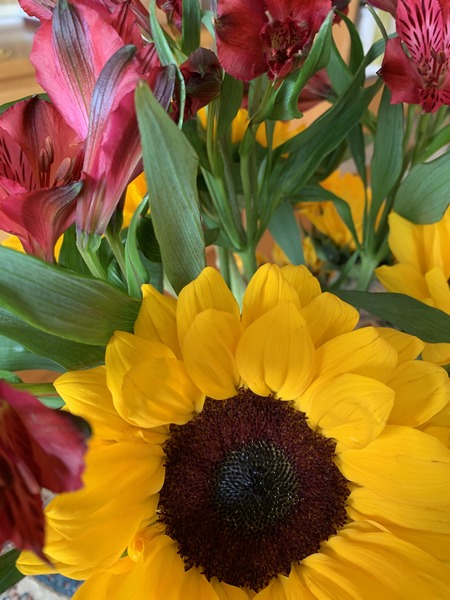 I have made the decision to not buy any more flowers from the grocery store. I only buy the ones on sale….three bunches of three for ten dollars. No more until Spring….unless I see Eucalyptus bunches on or off sale. I told Lee that we will now collect interesting fallen branches and put them in the large stag and pine tree pottery vase. That will be the center piece on the dining room table until it feels like flowers are needed. I really hate the professional bouquets from the florist. They seem so formulaic…so much like they were made for someone else and a call came in so they put your name on them after sticking them into the ubiquitous glass vase, put some gaudy ribbon on them and show up at your door shoving them toward you with a smile on their face.

When I wanted flowers for a friend who was my age now, I would go to the florist and ask if I could pick through the flowers in the cooler…pick my own bouquet. And when I had a fistful, ask how much and take them home to put my own tie on…usually a string or raffia. Then I’d take them to her in person, arrange them in her favorite vase and be sure there was enough time to sit and have a drink….best to always deliver them sometime after three in the afternoon. I don’t think they allow people to stroll through their coolers anymore. A shame really.

Anyway these on sale flowers are not lasting long and look like they would rather not be here. So enough! Sticks now with a wooden bowl full of Lee’s leaves. 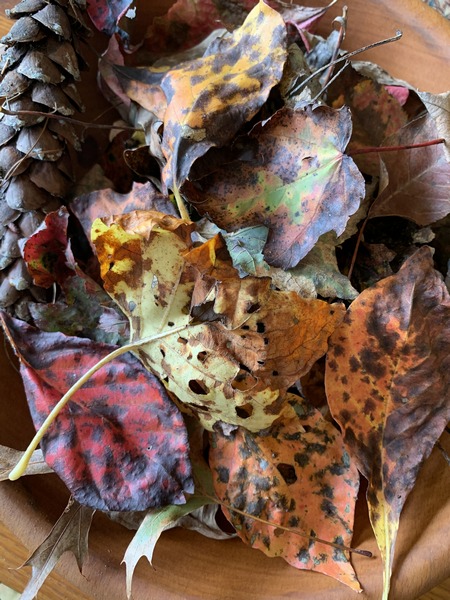 He thinks I should draw each one he picks up and brings into the house. Much like I would draw his feathers. Dried leaves are hard to draw, and only the best can do them justice in watercolors. When I try to paint them they look like those contrived journals that have the leaf painted next to a well placed sketch of the tree it came from, it’s fruit, if available, and all with perfectly calligraphied descriptions curving around the painted bits.

Here are some details of the poplar leaf below. 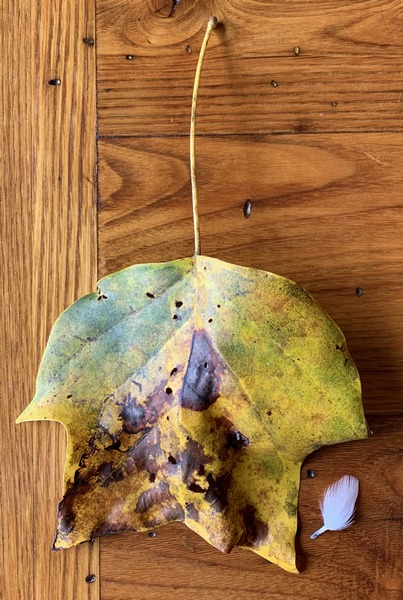 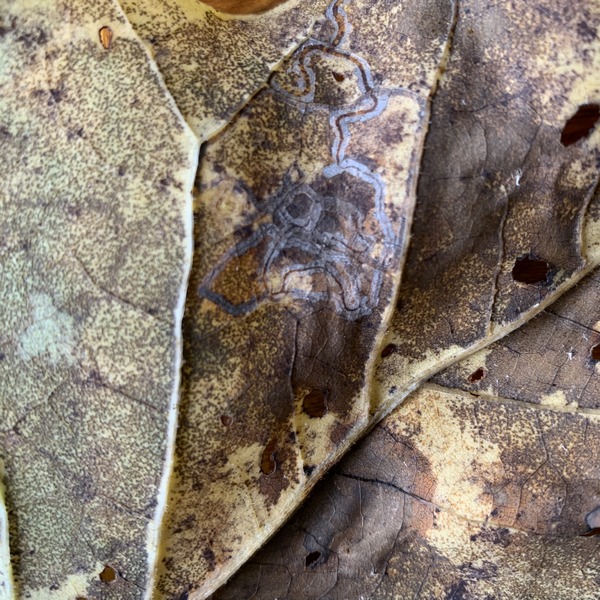 How could any drawing improve on this back side. It is so beautiful and your imagination races with where any of these trails and river beds could take you if you were just small enough to travel it’s topography. So why not have a bowlful of these adventures sitting on the table?

And the past four days of drawings a day. 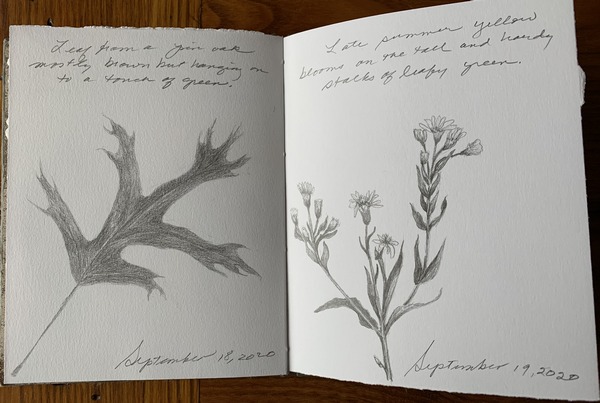 A leaf from a pin oak

mostly brown but hanging on

to a touch of green.

blooms on the tall and hardy 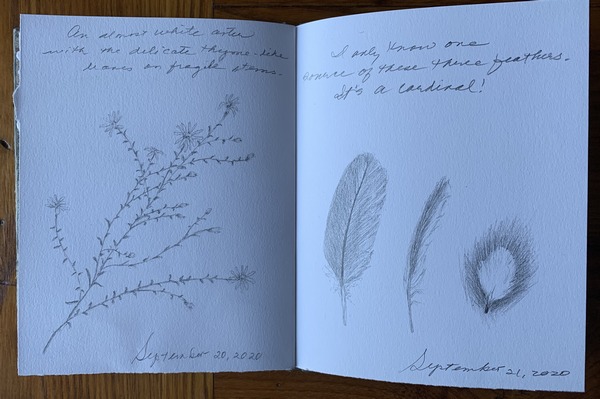 I only know one

source of these three found feathers.

And this picture of dead leaves veiling the darkness along the trail. 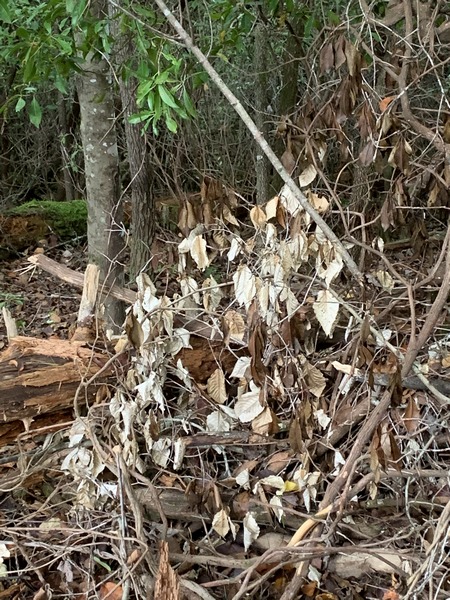 I opened one of the many jars of Lee’s honey from a while back. Very dark but such a sweet dark flavor. I put it on his French toast this morning. Drizzled a bit on my scone. The flavor brings back memories of collecting and jarring the gift of bees. Lee does not remember. 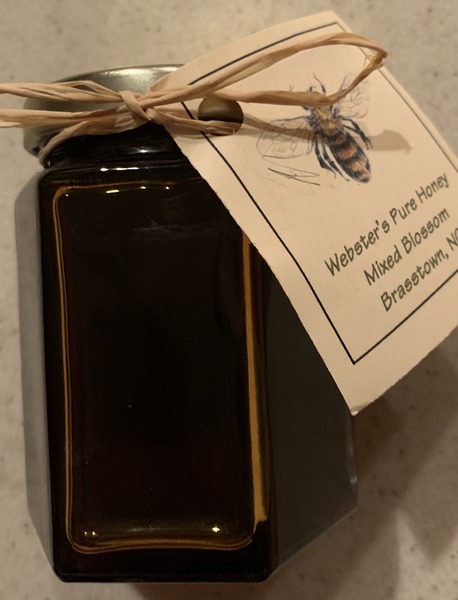 We are saving the finale of The Silent Patient until tomorrow morning during loads of laundry. I sort of understand why it is a best seller…..but I think male authors…at least most of the ones who write fiction can do a good job of getting in the skin of a female character but as soon as he attempts to write the relationship between that female and her male counterpart, one of those characters will suffer. I just think women fiction writers are better at getting into both skins at the same time. You don’t find yourself saying, “No, he would not have done/said that!”, you don’t get tripped up correcting a character that you knew perfectly well when he was sitting alone on a bench pondering something, and now the author has his character flubbing his lines. And the author can just as easily have the female lead found wanting in places. It’s hard to describe so I am glad he is giving the female lead the rest of the story to handle for him.

That’s enough…I am going to place Sandy Writer on the work table and see what she has to say.