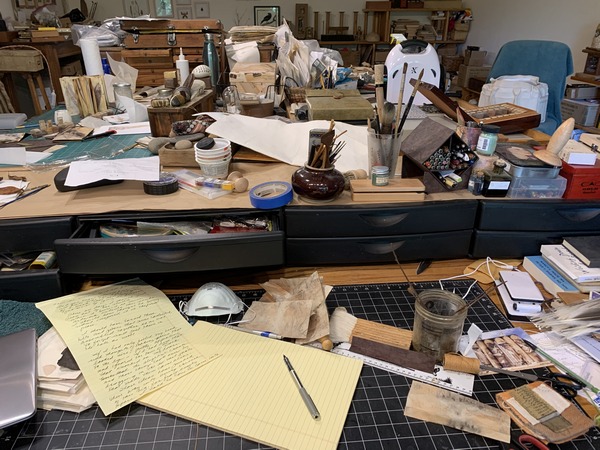 Warning…..just pretend you are the priest in the next booth or skip this post altogether.

What is it like to be surrounded by the physical evidence of memories? Things piled on top of each other, obscuring some other ones. The other ones that are temporarily less important.

Most of them are silent, passive. They have given up on my frenzied passion to bring them up to the surface and push them around – so we can sing together of what mattered. What might still matter in this silence of being lost.

I tried just now to resurrect an artist book – only just started and then put down – waiting for me to come back. My watercolors of place were opened. A soft brush first in water, then in the pigments. Brushing along the edges then further into the surface of each page – the memories come back.

And with them comes the breeze, the smells, the companionship. It is too much.

I put the brush down. Find this yellow legal pad and a waiting pen. I write what I see and how the vision of it all feels.

And you know what it feels like? It feels like the last chapter of a book that had such promise of going on forever.

There are days I should just stay out of the studio.

When I buried so much artwork outside this studio I should have thought to bury what inspired it in the first place. I should have tossed these bits and pieces that were collected, assembled together so as not to forget, and put them in the hole as well.

If I had only filled my head with thoughts of making pieces that looked nice, pretty, appealing to the eye. If I had done that and ignored the cries of work that knocked at my doors. The slightest crack and these thoughts took over by dragging in all the parts that made them come alive.

Those ideas have pushed their way into every crevice of this big, far from empty space I used to love to come into. This space, this big room should have had organized shelves and boxes and drawers of the bits I could assemble into something nice, pretty and maybe even interesting.

I actually did that at times. Made stuff that had no meaning and mattered so little I would rush through it – just to get it over with – get it ready for a show based on sales.

It’s a formula. Black, beige, old scraps of things that look like they might have mattered to somebody. Push them around until there is a nice design – add a bit of indigo blue or dark red – not too much. Put it in a frame or use it as a sample to show workshop students and encourage them to make more of the same.

Making work like that does see things used up. And if you don’t collect more, then eventually the studio space empties – even the memories can slip out the open door.

This place holds the evidence of an artist reluctant to let go. Holding onto the wispy threads that connect to memories or just plain trail off into an emptiness.

If you have stayed with me this far, thank you.

There is absolutely no one else for me to talk to – you are it and you have been more than kind in your understanding. And most importantly you are there.

It is a reckoning. I am doing a hard calculation of my time left for waiting. Waiting to see if it is another dug hole or simply sorting and putting most of it away.

Something will have to happen to this space before I come back with any intention of making something.

Boxes with lids. The kind you can stack on top of each other. The kind of box that you can write “stuff” on before the stuff is put in.

I will start there.