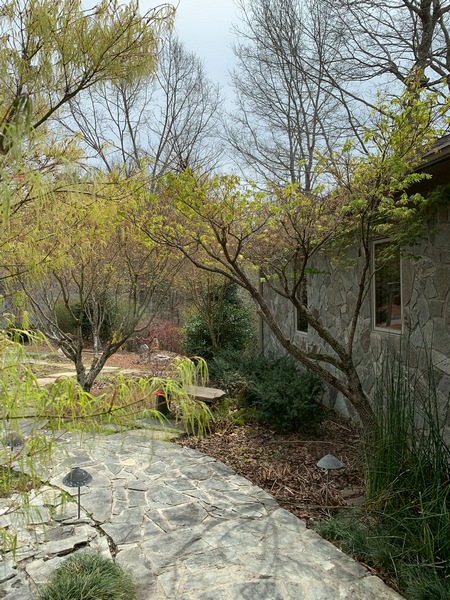 Some walks these past few days were refreshing.  First at the river… 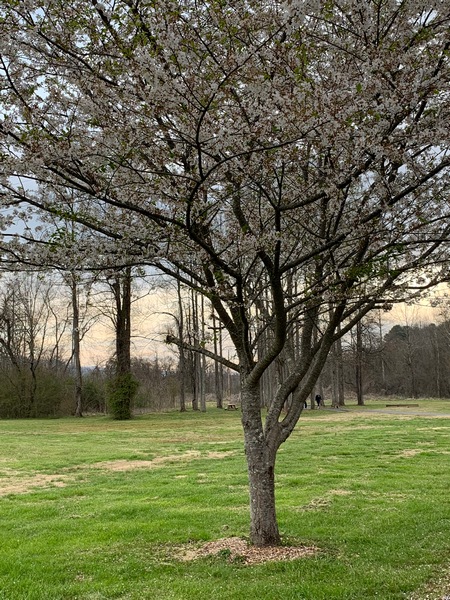 Some serious trimming going on there. 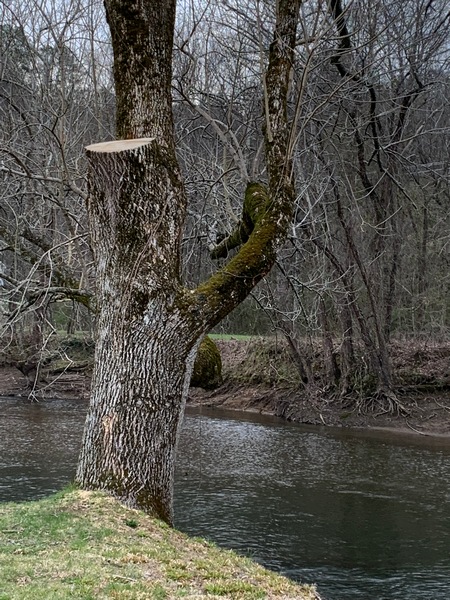 And ducks….always ducks.  But surprisingly no geese…maybe next week when I return. 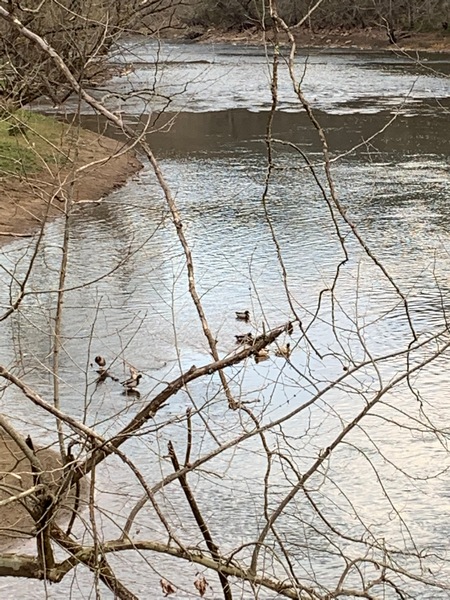 Then back out to the dam. 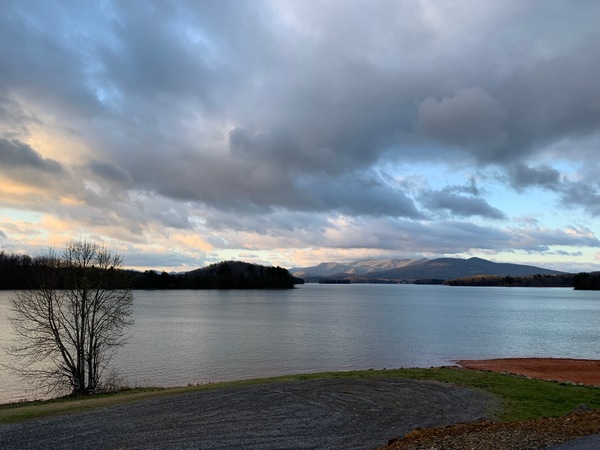 With a kayaker and loon to keep her company. 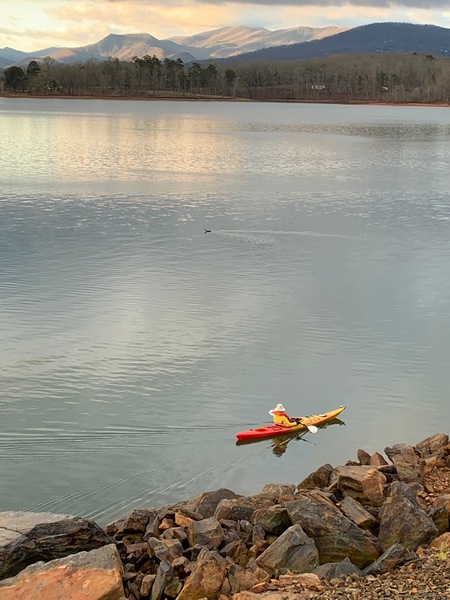 Now back to the kitchen…remember the last post had that recipe from the Cookish cookbook? Well here are some of the leftovers with shrimp, spinach and more lemon added. 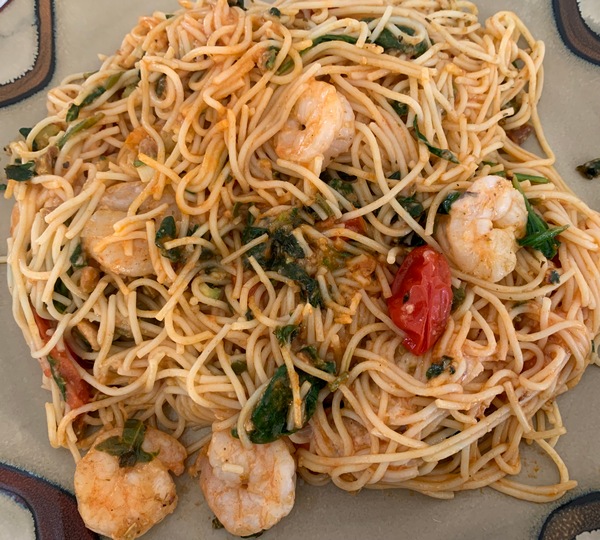 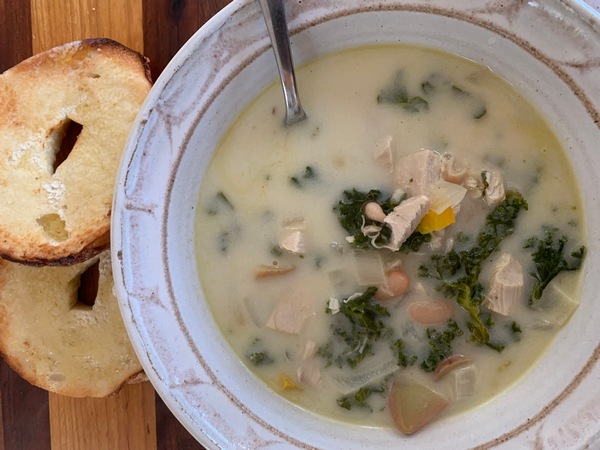 I rescued two cups fresh kale, seven little baby red potatoes, one third of a yellow pepper, one onion, some garlic started in olive oil….added one large carton chicken stock, 1/2 lb cut up roasted chicken, dash of cayenne pepper, some salt, and a can of great northern beans (because there was not a single can of cannellini beans in the store), and when it was cooked to just right, I added 3/4 cup heavy cream. Asiago bagel made the perfect addition. It was a lot of food so I opted for popcorn and wine for dinner…but this soup is delicious and there is quite enough for three more meals.

Speaking of food, my takeout place is now open at 7 a.m. for breakfast and was a good place to kill some time after the gym and walk. 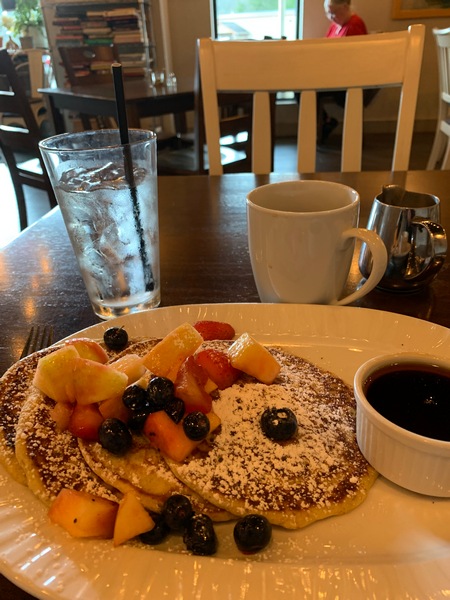 And this French toast that made two meals. The grits on the side were the best I have ever eaten! 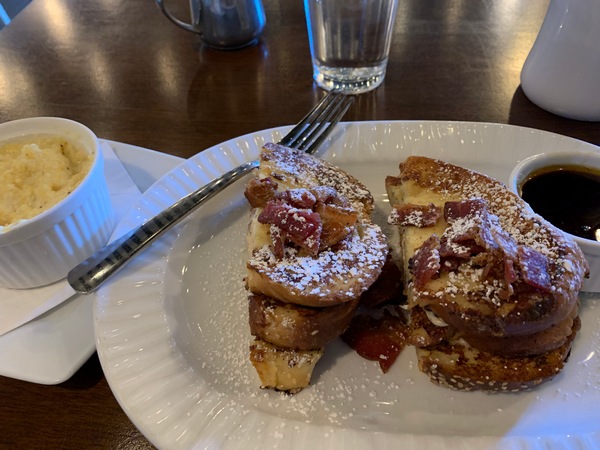 Also, the Bird Stories Book is complete! Ending with a Sandhill Crane, her baby and a hatching egg on the final page. 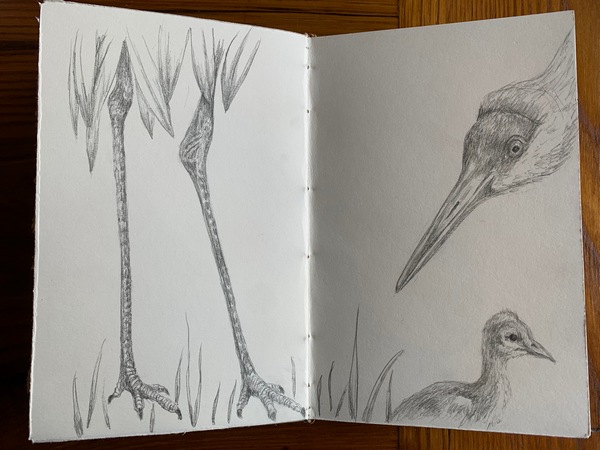 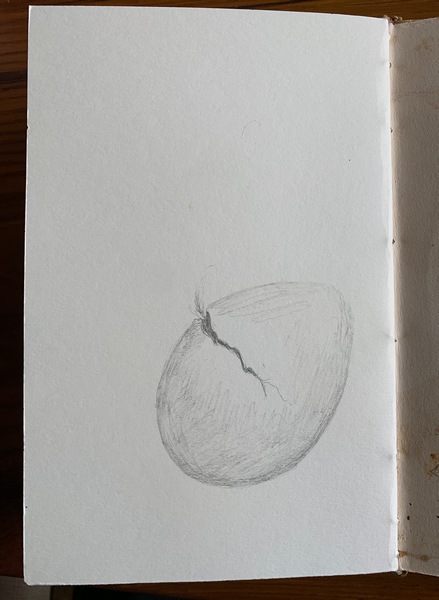 And another drawing in the house building book….manhole cover behind the house by the only tree growing out there. 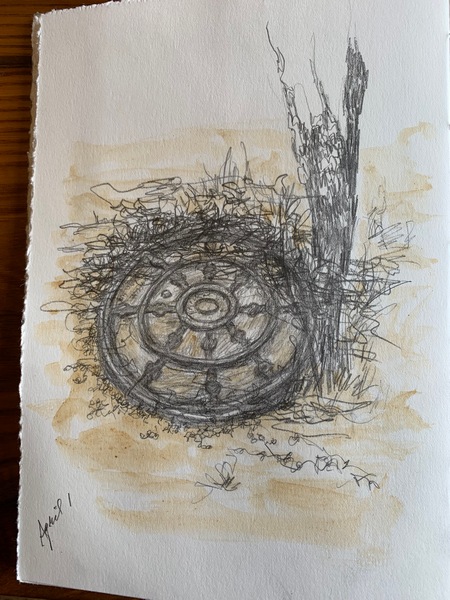 I have been working on the illustrations for the Burke and Wills story. I start with a fairly detailed pencil drawing… 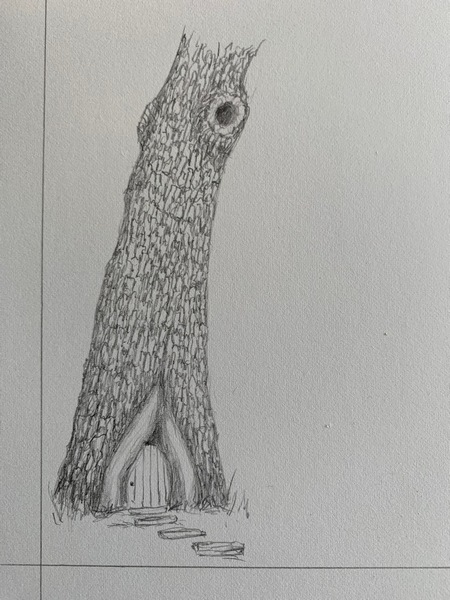 And then get out the watercolors to fill in. 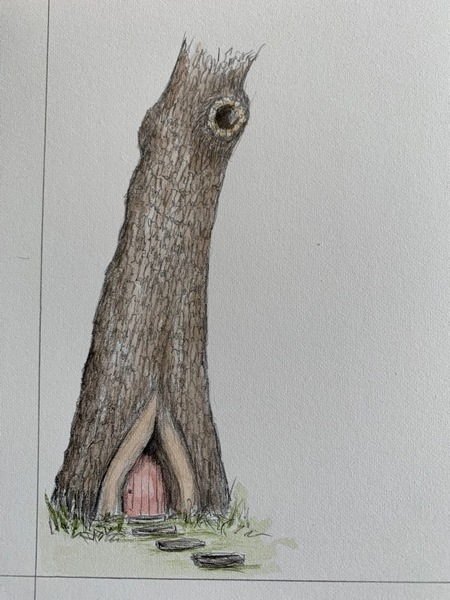 I am using the left side and mostly lower corner of the papers that are marked off at six square inches.

After Burke fell from the nest and told his mother he would be staying with Wills (the bunny he fell on), she did not totally abandon him and nicked some socks off a clothes line for Burke and his new friend to spend the nights in. 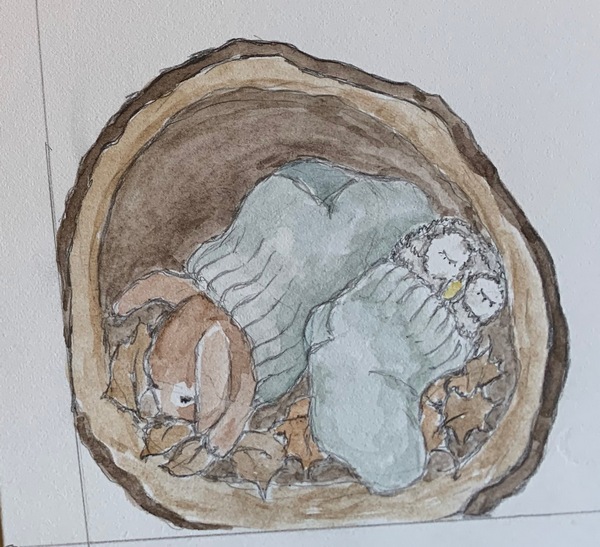 Wills realizes he has to help Burke learn to fly. 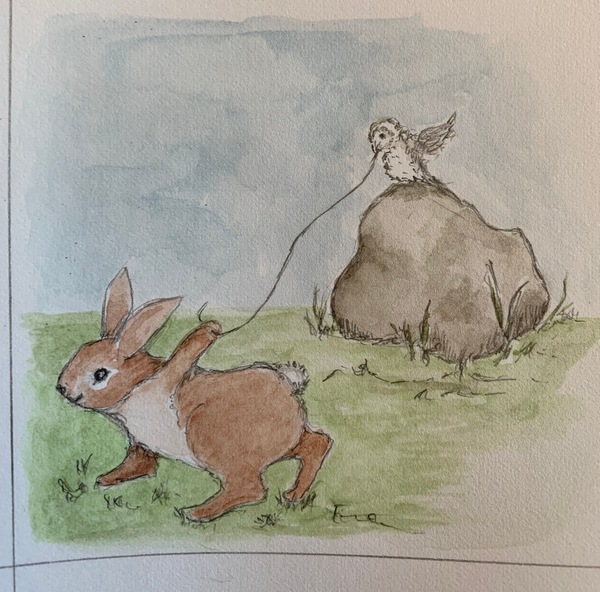 Boris and Belinda, a couple of river rats turn over their house to Burke and Wills so they are more comfortable. Boris and Belinda are rafting South in search of warmer climate. 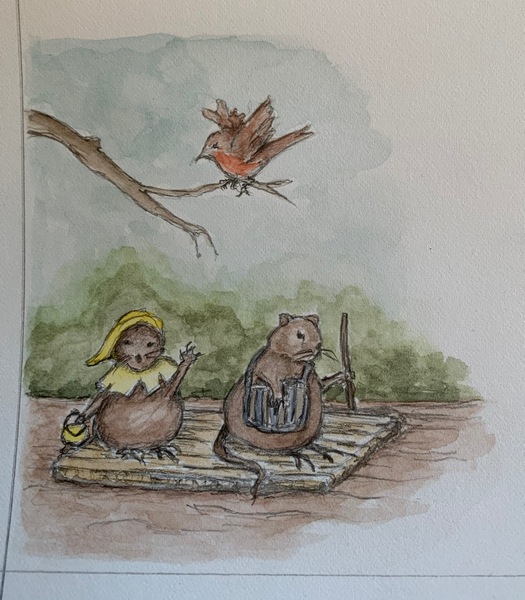 Here is Burke and Wills in their new place. 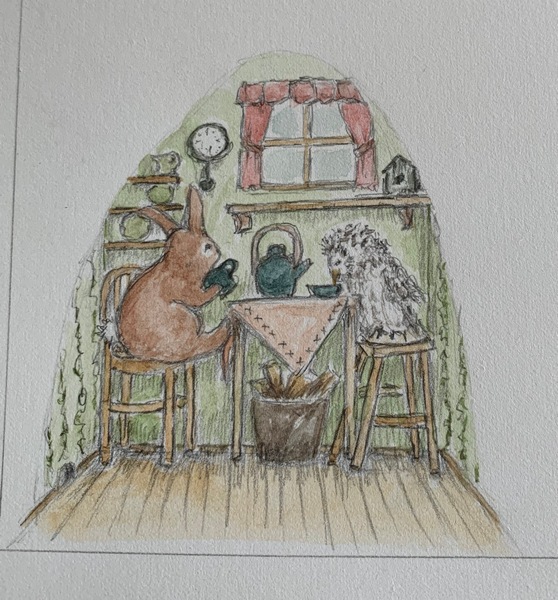 So far I have eight illustrations and will likely do some over again as I get better with each one.  There is no telling how many adventures they will have but I am very much appreciating them taking me along.

Not much else new going on. The house is so quiet.

They gave me extra copies of the floor plans for the new house and each time I go inside and wander through the two by fours I see ways to adjust where the furniture will go. It is one thing to look at the bird’s eye view of floor plans but quite another to wander the space.

More packing up to do. Then the builder, realtor and I will have another look at timing.