We are all tired of the rain here in western North Carolina. Too much grey skies. Too much wet.

So inside in the the studio I finished to large collage piece, The Roads. Here it is hanging ready to show art group on Sunday. 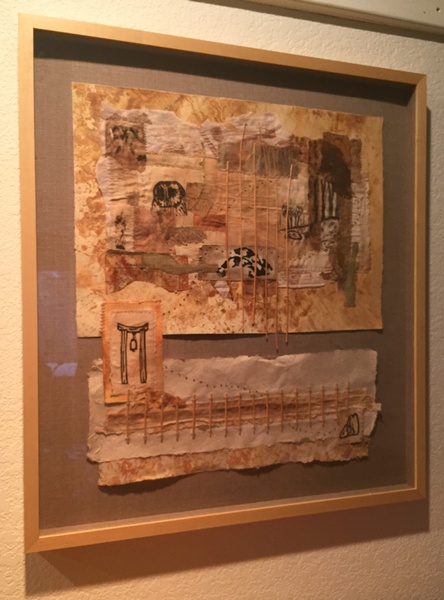 Too much reflection to shoot from the front. And some details. 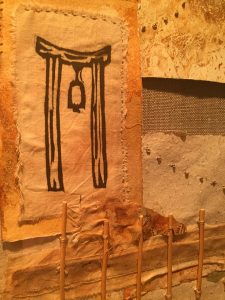 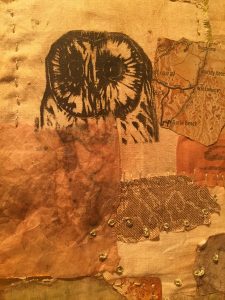 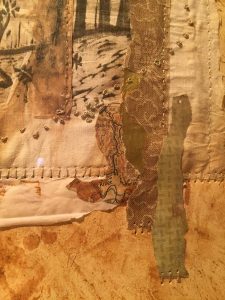 The color here is more accurate. And speaking of the color, mostly the rust color, got me to thinking of these large panels that were part of the Expedition to Elsewhere: the Evidence exhibit a few years ago. I will dig them out and try stitching into them. 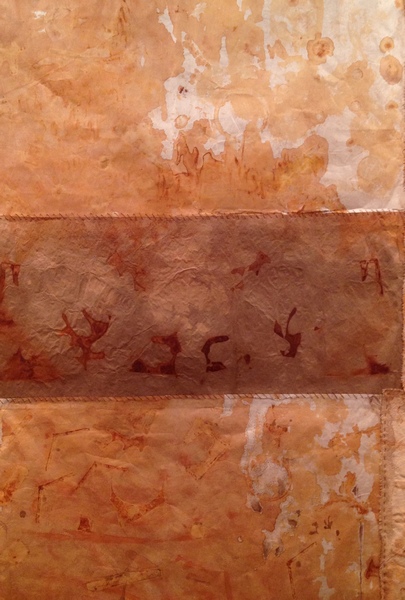 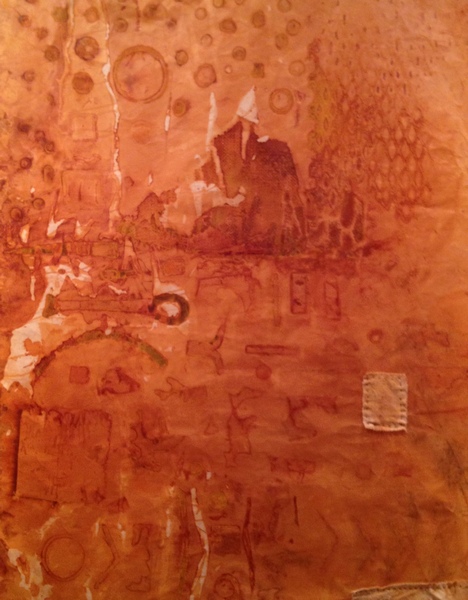 I notice that I already have a patch of fabric sewn on and each is sewn to a rusted heavy cotton sleeve to hang on the tobacco stakes….so why not just keep going. Each one is about three feet across and four feet long. It would give me something to do without thinking.

It is hard for me to do thinking any more.

The small prints below I made last week using blocks made from the negative spaces that fell to the floor as an old friend cut out his animals (mostly possums) on a scroll saw. He used a cheap 1/8″ plywood, drilled a hole near the top, slapped some varnish on them and sold them as Christmas tree decorations. I would pick up the bits and pieces and move them around on a piece of pine board to make a design. Then glue them in place, ink them up and make prints. If I turned them upside down, each butterfly and fish became two different critters.

I think I was born trying to make something from nothing. I do know we were raised that way. We were children of the survivors of the Great Depression of the 30s. Every scrap gets a good examination before going into the trash. 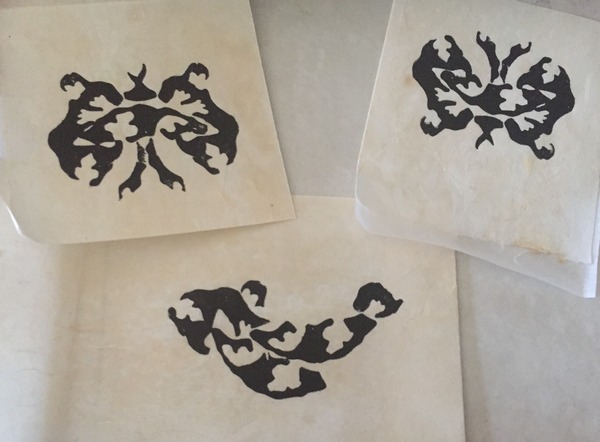 And when going through all my relief blocks I found these. Fun to print them again and remember the old fellow.

Also I just finished (almost) all of the work books for my master’s class in Australia. I only need to add beads to the strings and they are finished. They are a revival of an idea I had over ten years ago to jump start thinking….thinking of what matters to the maker. I called it Visual Definitions and since my class is titled, “Seeking the Visual”, I thought it would be fun to revive the idea. 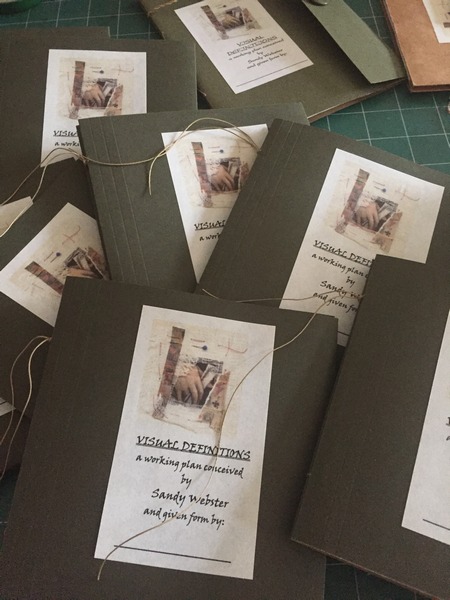 I think I will have to mail a box down under as there is getting to be too much to be schlepping in the airports.

On another somewhat unrelated thought…..

While working in the studio I turn on Pandora to the Lyle Lovett channel. And there is also music from similar artists. So far I am thinking that as much as I like Lyle Lovett’s music, I could run off with Keb Mo or Willie Nelson. Lyle Lovett just has too much of other musicians to make his music….too much brass….too much piano….to much…..

Even though that “Pony on a Boat” has always conjured up some of the best images. Actually I even tried making a pony in a boat because of that song. Suffice it to say that the boat was salvageable but the pony died in the trash.

But Keb Mo is just plain good to listen to. I could move next door to him just to hear him hum if I did not have other things to do right now. I don’t have one lick of musical talent in my bones, but that fellow makes me feel good, makes me smile, makes me want to fix him a nice supper for all the relatable lyrics and smooth delivery.

Same with Willie Nelson. He just drags you slowly off to a better place with his “maybe I should have”……

It might all sound a bit silly but honestly on a dreary day, trying to thread a needle, wondering why bother, making a mess for no good reason that you can think of…..and then turning on your iphone to Pandora and the lyle Lovett channel just so you can hear Keb Mo and Willie Nelson take you somewhere else, it is not a bad thing.

Now I am going to go put the beads on those books and call it a day.