This is a bit of a departure from what I usually post. And it is a bit of a lesson that I need so much more practice with linoleum carving….or I could just give it up for now.

So to start with the block. I carved two blocks of equal size. 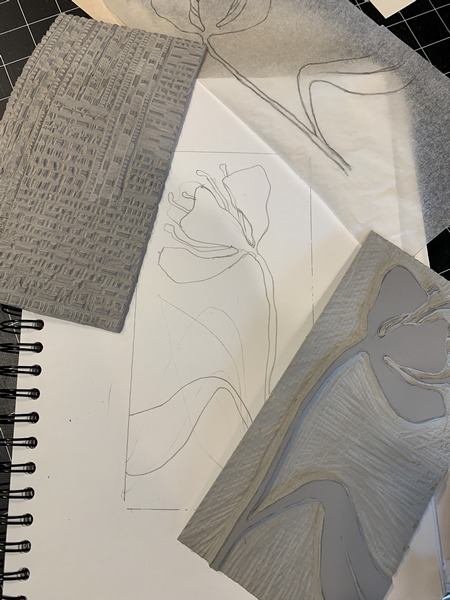 One was to be a muted grey background for the dramatic flower image in black. So they went on the wall to dry. 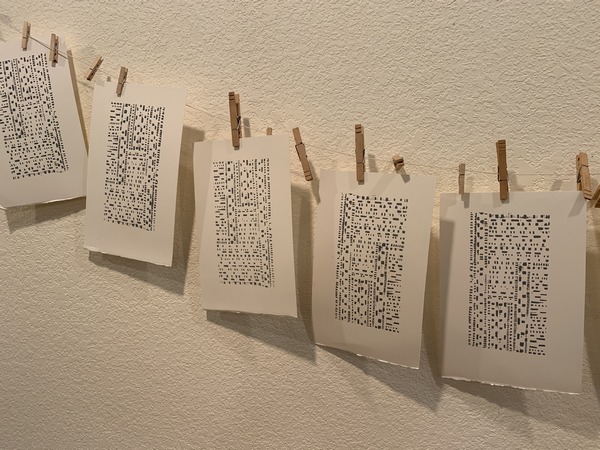 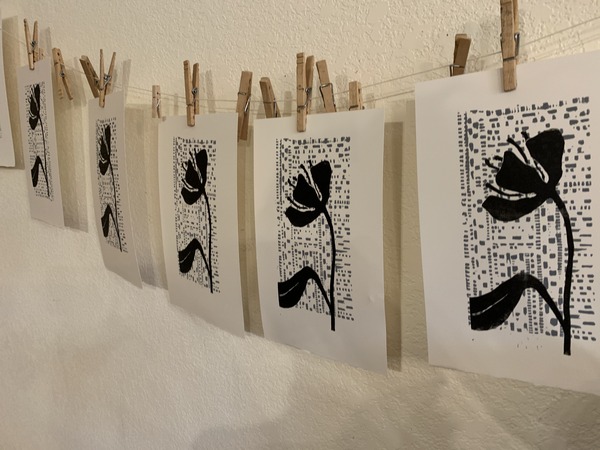 I sort of hated them at first but gave myself twenty-four hours to make sure. Then I cut all the white borders away. 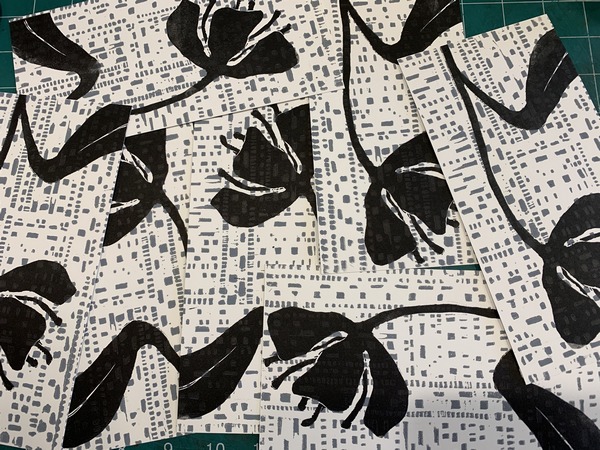 Piled up like this they begin to look better. So cut them up again and folded them into folios. 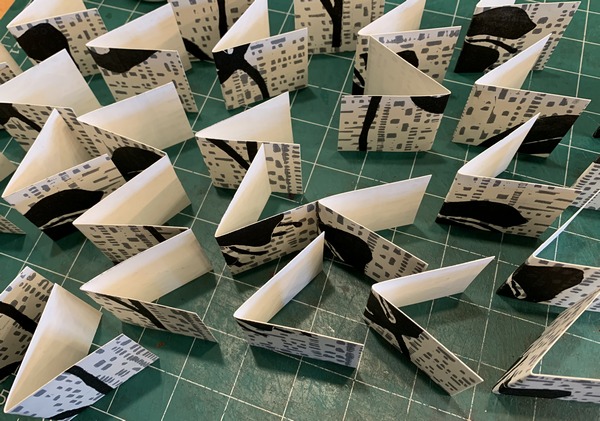 Now the idea began to form on how to turn the long book into a story of growing dementia.

The pages needed some kind of text. So I went to the computer and wrote out words about how dementia is….sort of a word association. 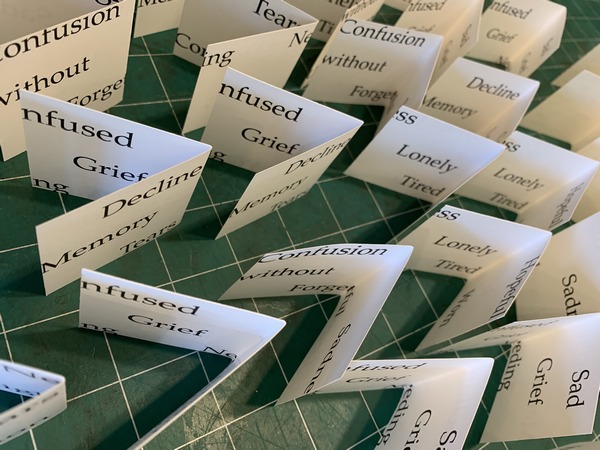 The pages were printed on both sides, cut and folded to match the lino print pages. 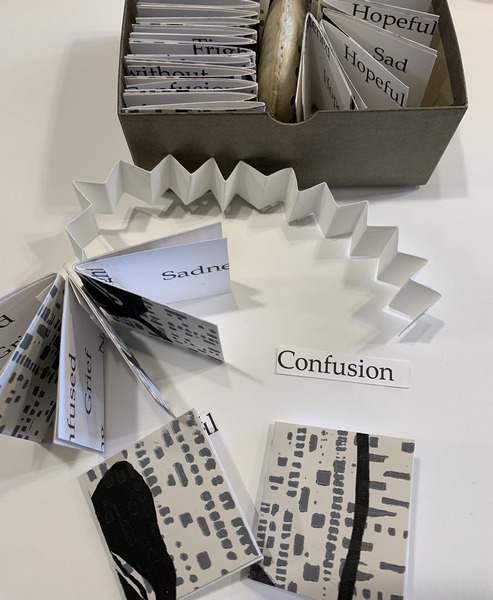 At first I thought I would coptic bind them then changed that to a continuous concertina spine piece…first white that was messy to black that felt more like the words.

I have to say that it was the fragmenting of the lino prints into pieces with those grey matter blotches in the background that made me think of the dementia my husband has. The black broken patterns are how there are positive blocks of thought and then just meandering from one idea to another.

I needed the focus not to be on the words or on the illustrated pages. The book began to take over as a sculpture, not meant to have its pages read one at a time. The sculpture also needed to show how dementia is a deterioration of that grey matter….a loss of the words.

So here it is finished. It does not invite touch. And a good thing about working on this, is that I stayed detached in some way. There were no tears on this work….just a determination to make a form that captured our experience with Lee’s disease.

And here it is. As many punched out hole pieces as I could collect were put into a specimen bottle to represent the need to hold onto what we have lost. 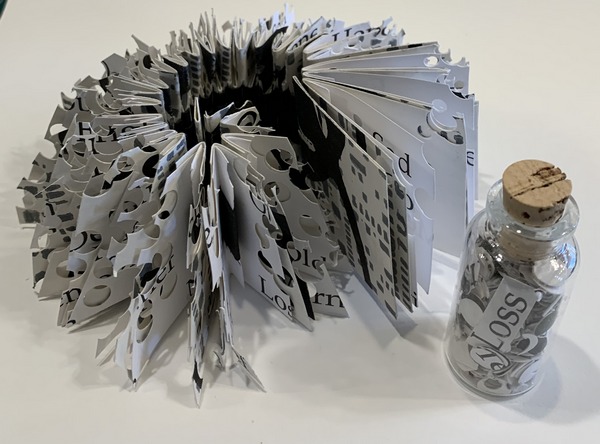 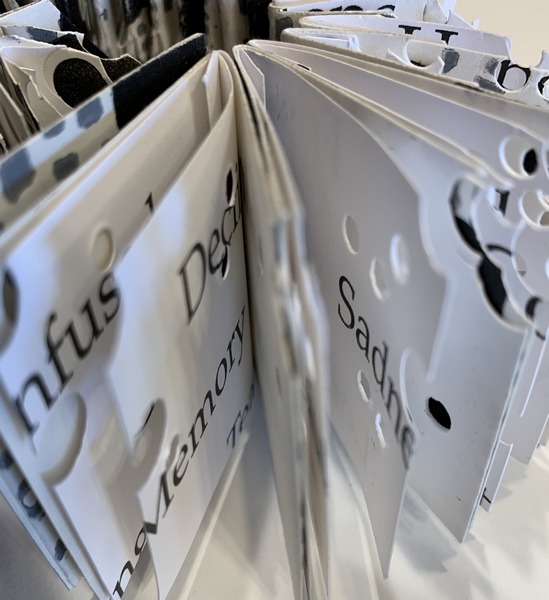 Most words can only be seen up close and by parting the pages. I like that it is like trying to carry on a conversation…one of us has to look for the words and the other has to help him find them. 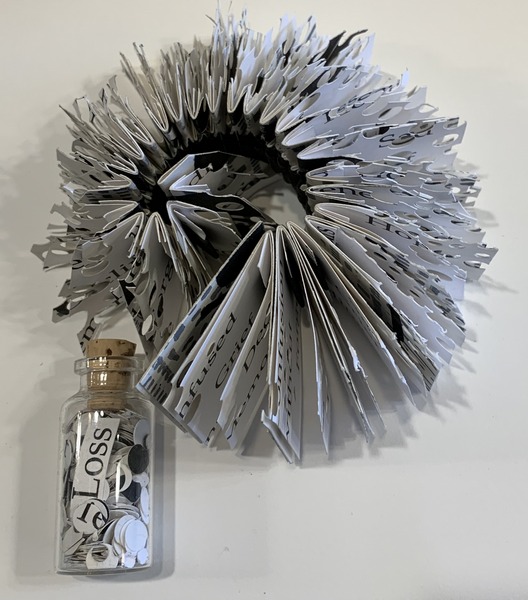 Now I have only done two pieces of artwork about Lee’s dementia. This one above and the stitched shawl when he was first diagnosed. Stitching on it gave me comfort and caught several tears. 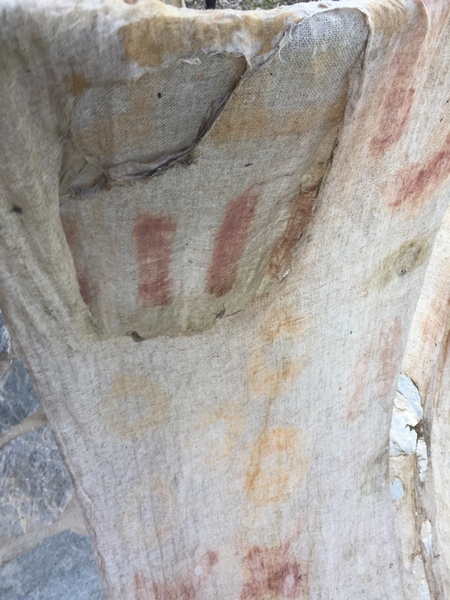 Rescuing the linen pieces that had been colored with the soils around where we share a home  Trying to hold them all together with patches and stitching. 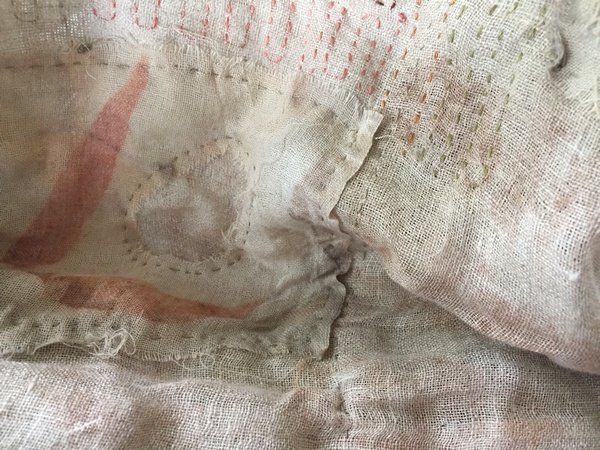 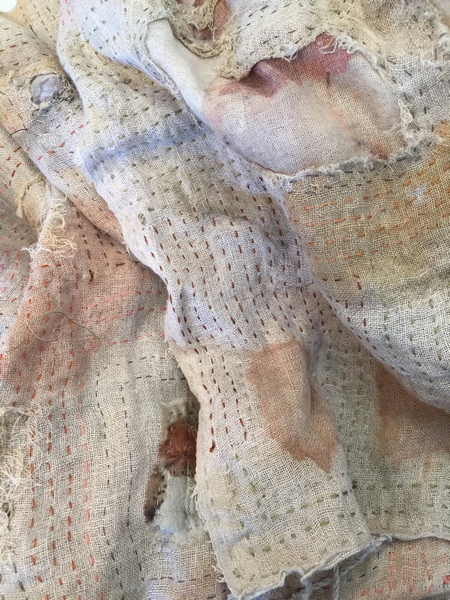 I only had the opportunity to see one other artist work with this subject and she was in my last class taught a the folk school a little over a year ago. It is this book that she did in class about the difficulty of communications between her and her husband. I love how it captured the essence of those difficulties. 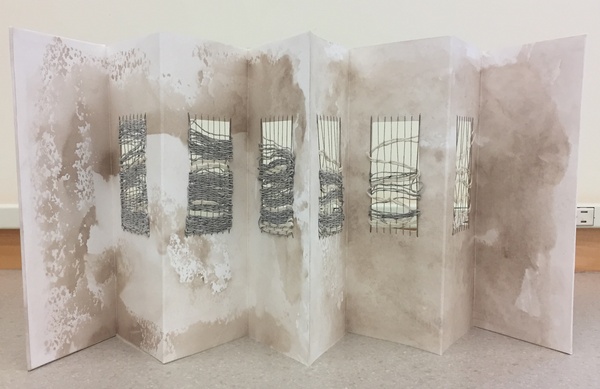 I will say that the shawl is the piece I will hold again and again. I will likely put stitches over stitches just to have it in my hands. The black and white more detached view of dementia does not need to be touched. I don’t need to hold it. But I did need to step back and take an honest look at how things are and how they are going to be.

Next week I will work on the Bush Books….lots of cutting and pasting and folding. Then making covers for them all.