This morning I took all the ripe bananas that had been sliced and frozen and put the first batch in parcels back in the freezer. I need these for the morning smoothies I have almost daily. I am trying to keep with my routines as much as possible in the times of the virus. 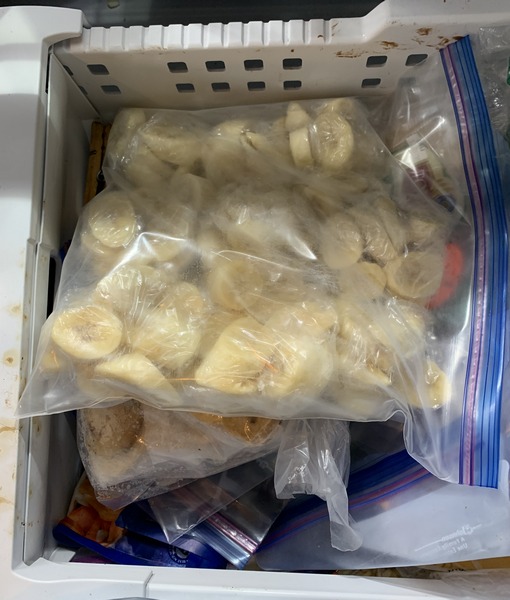 While in the freezer I noticed some things that had been there for quite awhile. Things like green beans, peas, etc. Then I looked into the pantry and refrigerator. More things. Extra cartons of beef stock….why do I even have that? Only one chicken stock that I use regularly. Found some canned beans, a very old can of beef consomme, diced tomatoes and a jar of stewed tomatoes our daughter gave us at Christmas time. So I took a mirepoix of celery, carrots and onions and added some peas and chopped up the green beans. Tossed in some diced tomatoes, can of tomato sauce, cannellini beans and let it simmer with the consomme and beef stock. The peas floated to the top like the styrofoam they tasted like and the beans still looked like they were frozen. Those beans were the tipping point. I cooked them all a bit longer and then took the blender tool to them. You could still taste the bits of strings left by the beans that almost clogged the whizzer part of the tool….but I persevered until every last one of those peas and beans became part of the sludgy mix. 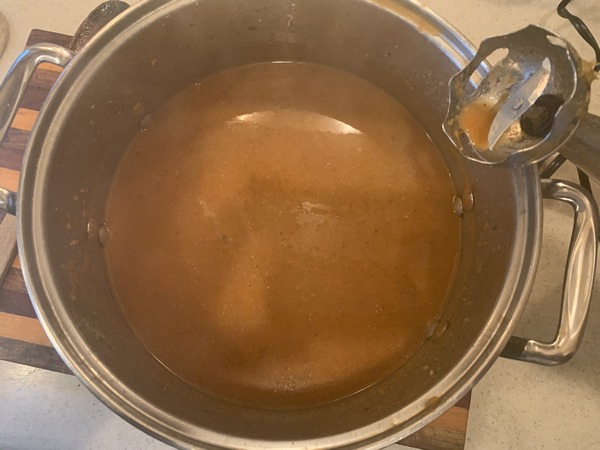 Far and away the ugliest soup I ever made. Any herb and seasoning mix in the cupboard was added to “pick up” the flavor. Originally I was going to add rice to it, but changed my mind when I saw elbow macaroni in the pantry. Why that was there I do not know. I thought I had a more refined taste when it comes to pastas. AND the elbow macaroni was made from semolina flour. Who eats that?! But I cooked the elbows separately in boiling water and just before they got too mushy, I added them to the soup. Then because it all looked a bit weird, I put in a pint of the stewed tomatoes. At least now there was something floating around….well sort of floating. 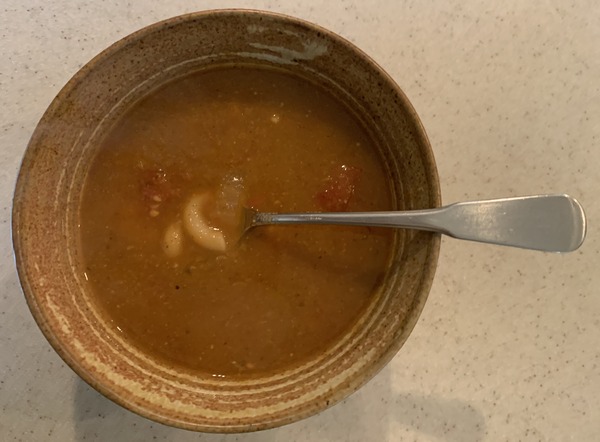 It was to be our lunch. In better times I might have considered tossing it out right before I put the stewed tomatoes in. But more salt, pepper, a little chili powder, more soup herbs and I thought, “Why not eat it?” I served up a bowl for Lee and he asked for more. I ate my own bowl of it and after the eighth spoonful it wasn’t bad. So now I have three large containers of it in the refrigerator waiting for me to find more room in the freezer. We can do this.

In the past several days I have made my way through trimming some of the one hundred and fifty sheets of the bush book from the printers. Each page needs to be cut precisely on four sides. I need to pay careful attention when I do it so it is only done when Lee is with his caretaker.

I am also keeping up on the drawings a day with haiku. It appears that we have acquired an unbelievable amount of wine stoppers. 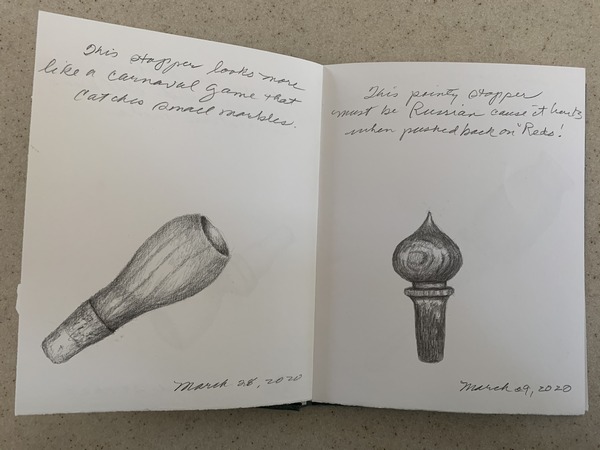 must be Russian cause it hurts

when pushed back on” Reds”. 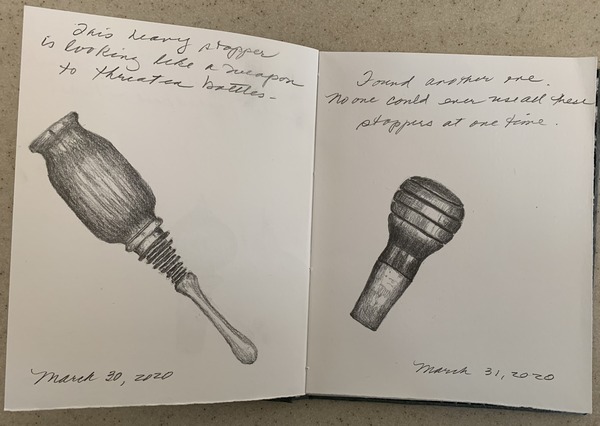 No one could ever use all these

stoppers at one time.

And I did get back to the wildflower paintings in the six way book. 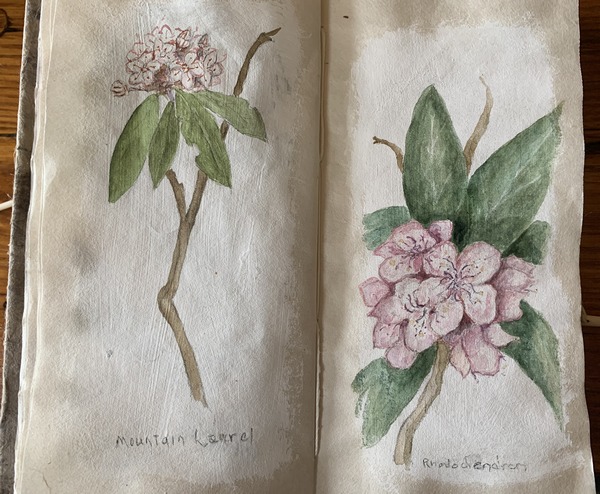 Some of these have the look of old wallpaper found in farmhouse bedrooms. They’re a bit nostalgic in feel and I can therefore lower my expectations for having them look good. I remember in undergraduate school my adviser and head of the art department getting very frustrated with anything that smacked of “nostalgia”. I also got that in graduate school. Nostalgia came with warning signs. Now it just makes me breathe more slowly, which is a good thing at seventy-five. And you know what else they remind me of, speaking of graduate school?

My very good friend who I met there is an excellent egg tempera painter. and for her thesis exhibition she studied abandoned farmhouses in her area of Canada. She would go into them at different times of the day to see how the light played on the surfaces and think hard about the women who made these places a home.

One of the things she did was prepare a whole slew of gessoed boards about the size of electrical switch plates and then carefully egg tempera painted each one with an intimate close-up pattern of the old wallpapers in the houses. So on a massive wall during the exhibition was this long row of spaced out tiny paintings that the viewer had to get close to.  And then you could see them sigh and smile as each one had the capacity to invoke a long lost memory. Isn’t that lovely?

She and I got through those tough two years of having to defend our work with the help of alcohol. Her choice was single malt and mine was bourbon. We would retreat to either her room or mine after a particularly brutal critique, pour a drink and marvel at the fact that those who were so many years younger than us knew so much….and were so willing to share it with us who were old enough to be their mothers. Those were such good years for learning and laughing. I will admit that the laughing came long after the learning part and I wouldn’t trade the experience for anything. I learned how to be honest with myself about what matters enough to spend so much time and energy on…..what it meant to make what matters visible. I am forever grateful for that.

It makes me smile now, and I will have a scotch later for Jo…maybe give her a call this weekend to see what she is working on. She is a bit behind Lee in the dementia. It runs in the women of her family. But she remembers me and we can still laugh at our shared memories.