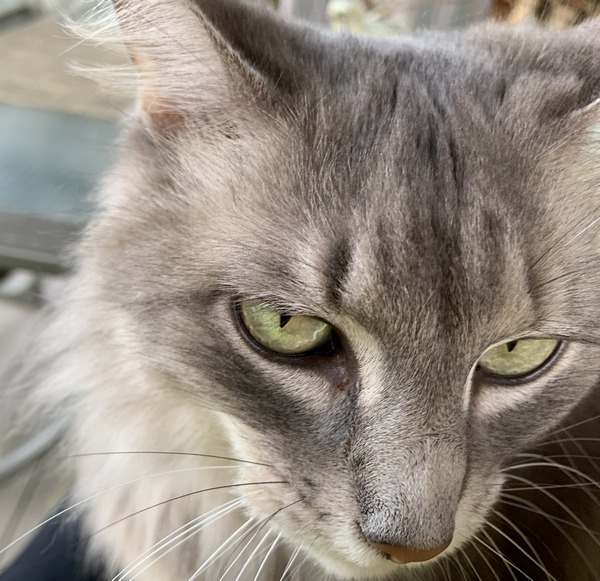 Sadie senses the unbearable sadness in the house with Lee no longer here. She stayed very close offering her support. Comforting.

It has been a very hard transition for Lee and myself as well. It is so quiet here. No one to watch and follow with distractions and endless chatter to keep him side tracked. No shuffling of feet and angry outbursts of frustration. No quiet sobs that need to be fixed.

Lee fought being there and felt abandoned. He did not blame me but his “captors”. The bad guys keeping him from coming home. By Wednesday morning we had decided that him seeing me and then my having to leave would be an impossible situation for both of us. I turned over the bag of sticks and feathers and left. I gave permission for them to use a calming sedative if necessary to keep him from banging on doors to get out.

By the time we had a FaceTime call in the Memory Care main office yesterday at two o’clock he was actually better and now showered and changed. He had refused to take any clothes off so was in them for two days. We agreed that I would pretend to be tied up getting a knee operation and could only call to see each other once a day. He was laughing when we rung off yesterday.

This morning early I took his wifi remote for his television down and another rock for his collection. The sedatives have arrived and he will likely go on them for awhile. He has been recruiting fellow residents to help him escape. They of course think if he wants to go then he should be allowed to go. Of course all of them believe that their room is their home now.

Our doctor here suspected Lee would have problems and she has known him over twenty-five years. So sedatives were quickly approved.

I just finished our second FaceTime call and noticed he has on another clean shirt. He had stuffed a spoon into his sock and was quite pleased with himself. I tell him when he asks about my coming to get him that I am stuck in this room in the hospital waiting for my knee to get better and remind him that we are older now and need to take our time doing anything. He laughs at that. I get him laughing and then say we had better get off the phones and tell him I will call again tomorrow at the same time. I tell him to go outside and do some walking, line up his rocks in his room so he will know if “the bad guys” are taking any of them. And he is content.

They tell me that contentment lasts for over an hour and then anxiousness starts to come with tears. He is getting more emotional as the day goes on. But now he has some medication and I okayed what they call “home care” that allows one nurse to keep an eye on him regularly and take necessary precautions to keep him from getting depressed.

It will get better. They are the best at dealing with memory loss patients and I am so glad that in 1993 we took this long term care policy out. The insurance man back then was right…the care some of us need when older can wipe away all assets and leave people in less desirable situations for care. He has a lovely room and bath with all his own things and an amazing staff to look after him. Even his showers are given by two people in case he falls and takes one down with him. They have thought of everything and Lee already has a crush on some of them. He apologizes if he swears in front of them and offers feathers to make up.

For myself it was harder than I thought being alone. But I am not ready for much company…only Barbara who knows not to say kind things that make me tear up. My cleaning lady said she will pray for Lee and me….and I said thank you. And I suppose what I really do not want is the sudden concern of those who might have thought to offer help these past few years when Lee and I were having a hard time.

BUT to all of you who have kept sending cards, checking in, making us laugh, and calling on the hardest day when I left him there….words of thanks are simply not enough. You have kept me upright. You have made me cry tears held in too long. You have been just what I needed. I hope others like me who might be going through this have friends like you…it is not always the ones you thought would be there.

So to deal with losing Lee I took out two old shirts of his and a handkerchief worn thin and added him to the pages of how I looked when we met 54 years ago. I drew in the last gift from the yard he gave me, a shattered pine cone and a stick we picked up together. I also drew a split bamboo leaf that came in on his shoes. Now he is here whenever I open my book.

Our daughter and her partner arrive Saturday. They will stay in the apartment and Ben will share his flavored concoctions of infused vodkas and gins. They will dust the high shelves, move a twin bed from my studio over to the guest room where things were taken by movers to go to Lee’s new place, replace lightbulbs, take a look at my dryer issues, help me get new plants and fish for the newly fixed pond, and do some cooking.