I am going to take this one small break from my usual blog entries of the things happening in my very small and somewhat protected life. It is a need to address another war. 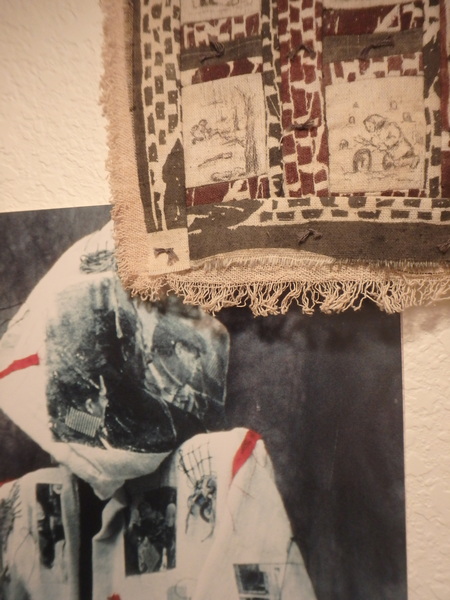 I wish I could have found an image of the whole small quilt about the atrocities in Chechnya 1999. It is in the upper left and was a series of small engravings done on fabric of a woman survivor of this horrific war perpetrated by Russia. We see today how brutal they can be in war. This piece had nine patches where we see the mother holding the hand of a younger son as they wave goodbye to an older one going to fight against the Russian aggression. She goes to her church to pray for her son in another. She helps to feed those women hiding in the sewers of Grozny in another. She asks a Russian general if she can claim the body of her son left on the battle field. She buries her son. The last image is of her in a chair looking at a family album. It is all she has left of her son.

I don’t know if I put this small quilt pieced together with shattered brick images between engravings somewhere special or if it was buried with the other works of war. If the latter it is in good company. The entire series of coats made about the war in Bosnia has been laid to rest. Here are the letters I wrote during those four years that preceded the Chechen conflict….starting with my letter to Tom Squitieri, a journalist for the newspaper, USA Today. I had written to him about a young woman who he interviewed about the assaults on her by Serbs.

Here is his response to that letter. 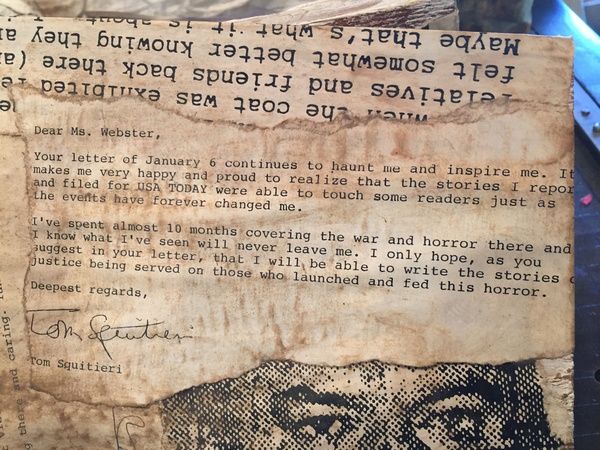 One to President Clinton. 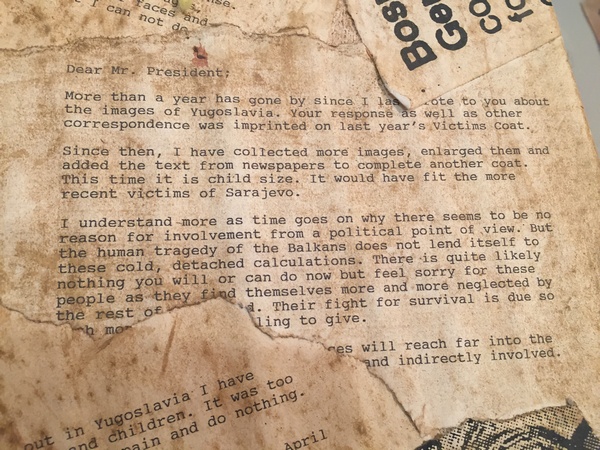 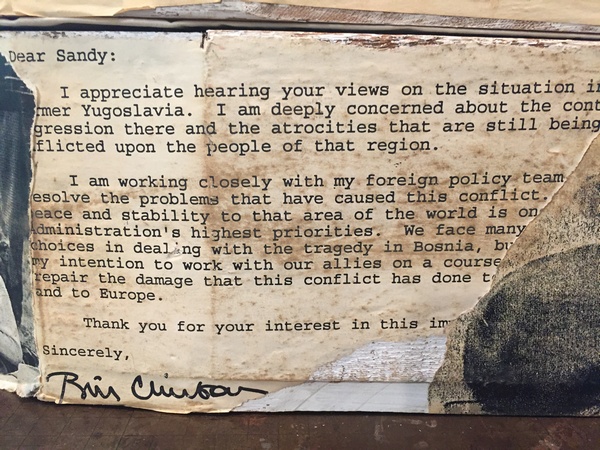 And another to the aggressors. 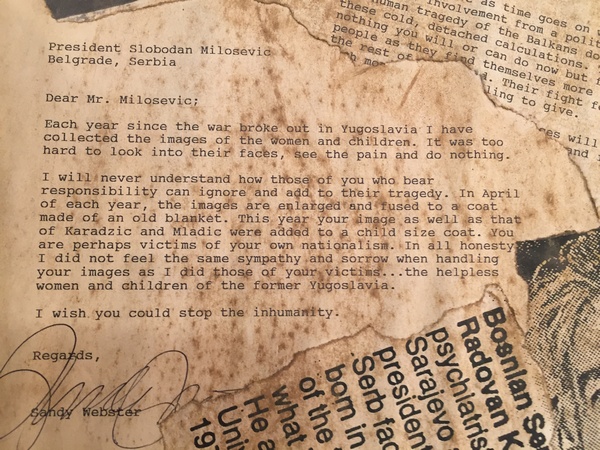 And those restoring order to their war torn country. 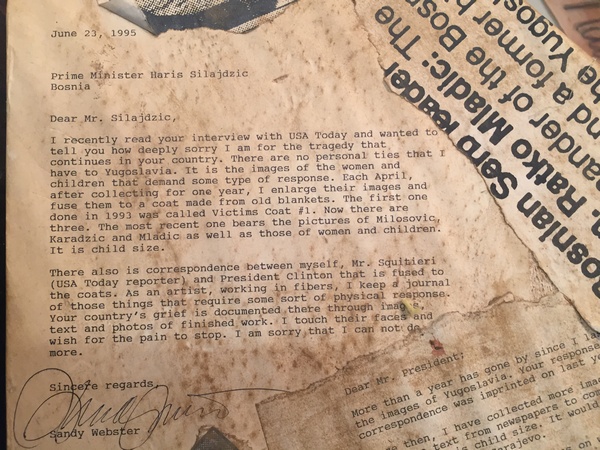 I recall following any news from the former Yugoslavia on those caught, tried at the Hague and finally dying. I remember telling a friend years ago that I would rather not meet his Serbian visitor and to let me know when he was gone. And even this past month feeling glad that Australia sent the Serbian tennis champion home before competing. Such arrogance reminded me of this body of work done years ago while watching the war unfold day in and day out.

And now we see it all over again.

I made a quilt about war and the need to separate people and construct boundaries not to be crossed. The Peace Dove comes in from the upper left with all good intentions of this time, this time it will work. Only to be shot down again and again.  The remains of these doves are placed in specimen drawers with reminder tags of why we are incompatible with each other. 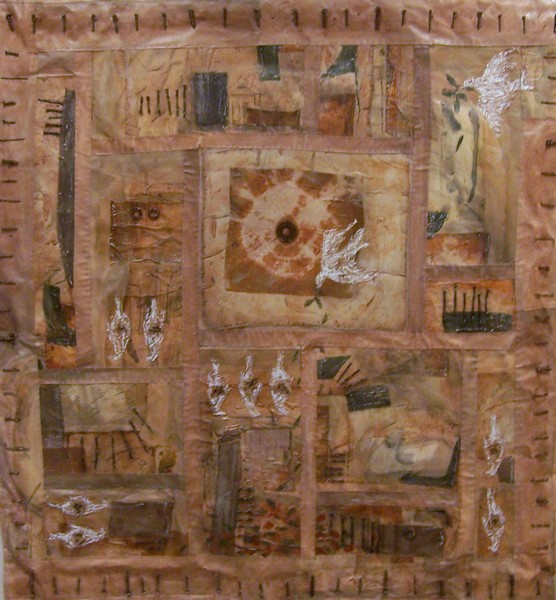 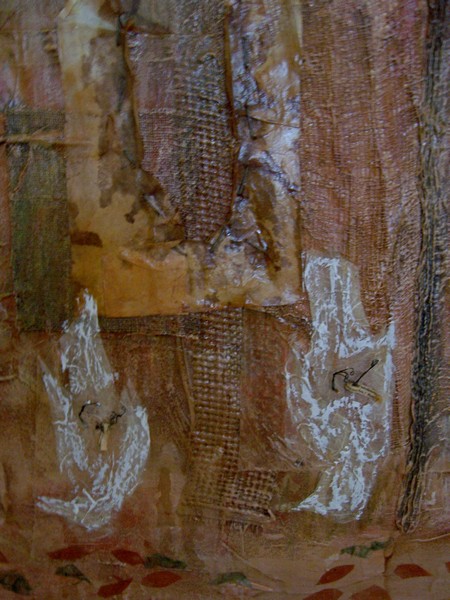 And now we watch from our safe places as children are trying desperately to flee Ukraine. Much like the first busload out of Sarajevo I put on a gourd that felt so good in the hands as I cradled and glued their images down. 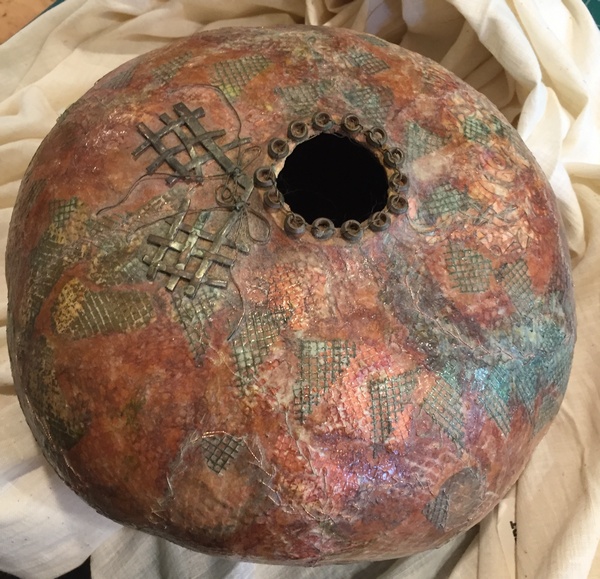 All of this bundled and buried with other work that mattered to me to make as an artist. 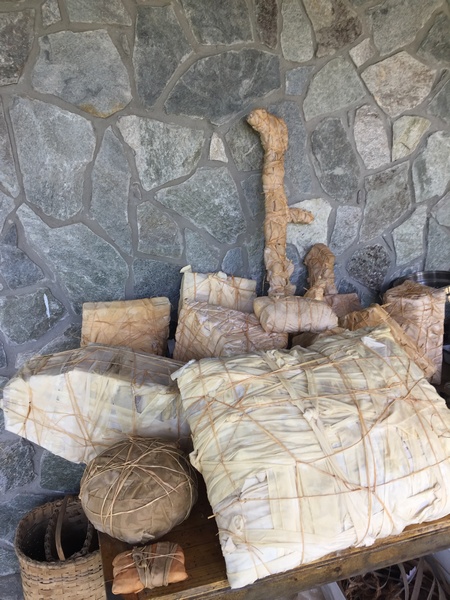 I no longer have the energy to create the depth of feeling I have for the lives needlessly lost to war. And I can only use this image for Ukraine….. 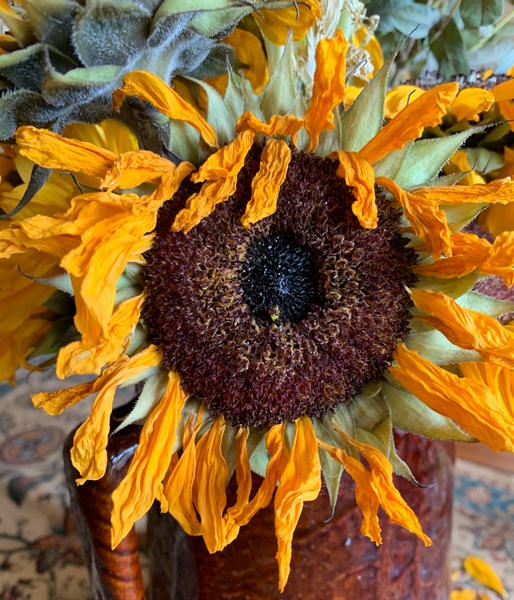 and hope that the Russian soldiers took the old woman’s advice and put sunflower seeds in their pockets so that Ukraine can rise again.