I know, I know, I just did a blog yesterday.

But something about how we leave things behind and how I am going to do some drawings on a long scroll to put in a wine bottle made me remember someone.

K. Lee Manuel. One of the few California based artists who started the Art to Wear movement of the 70s. Long after she was featured in this iconic book I read somewhere that she would paint feathers and leave them in places around the world….just drop them and then watch from some hidden place. And when someone picked a feather up, they looked up in hopes of seeing the bird it came from. She loved bringing that bit of magic into someone’s life, someone off in distant places where magic was still possible.

Of course, unlike now, magic was more possible in 80s and 90s. We are too tainted now and if someone found one of her feathers they would likely google it up with a photo and reaffirm their belief that it was not even remotely from a real bird.

Anyway, K Lee Manuel was magic for me and years later (after I came across her name in the art to wear world) I had a chance to purchase one of her feathers that she had turned into a pin. Here it is. I still have it! 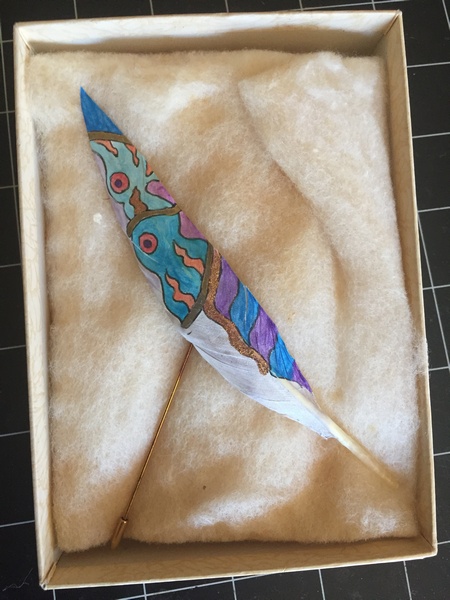 Can you imagine coming across this on a path in Central Park or along an Amazon trail? Or on the steps to a mosque in India? How could you not look up!

So thinking of her and others who were such pioneers in the field of Art to Wear, I dug out my book. A book that in 1986 when it was published took every dime I could save to afford its cost of $98 before tax. They ended up having to do a second printing of this luscious book that must weigh close to ten pounds. 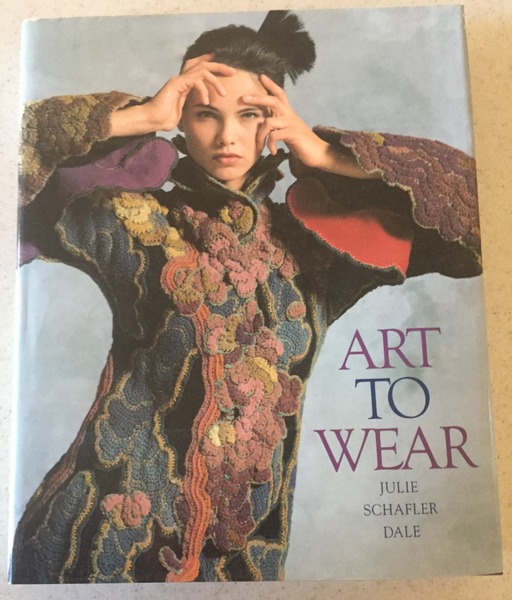 I drooled through this book for many years and worked at making my own Art to Wear. And almost all those pieces that did not end up lost to customs in Australia ended up decorating the dining room chairs of a friend in Brisbane, Queensland. I think Peter still picks the one he wants to wear to art openings with his sari.

And another aside, the author Julie Dale’s husband is Jim Dale, the voice actor that took several Emmys for his portrayal of all the Harry Potter character voices on the compact discs. Lee and I found him magic to listen to and I would buy the Potter stories in this form rather than book form…just to be read to. We would sit on the couch and keep ourselves to just a couple of chapters a night.

So here are some of the people from this book.

K. Lee Manuel. Feathers and leather in her hay day. 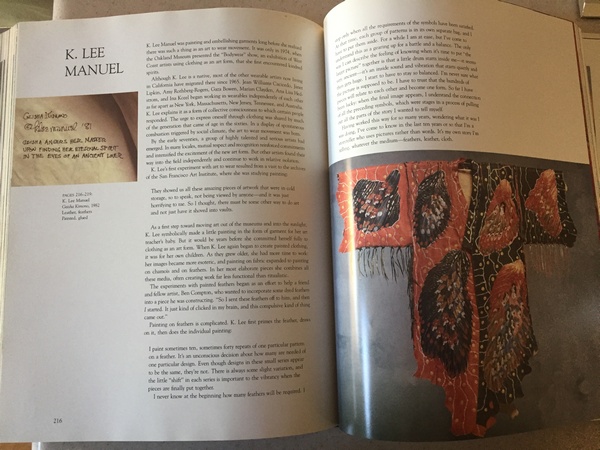 Jean Williams Cacicedo who just a few years ago I shared a bottle of scotch with when we taught at the same venue and relived these early days of Art to Wear. 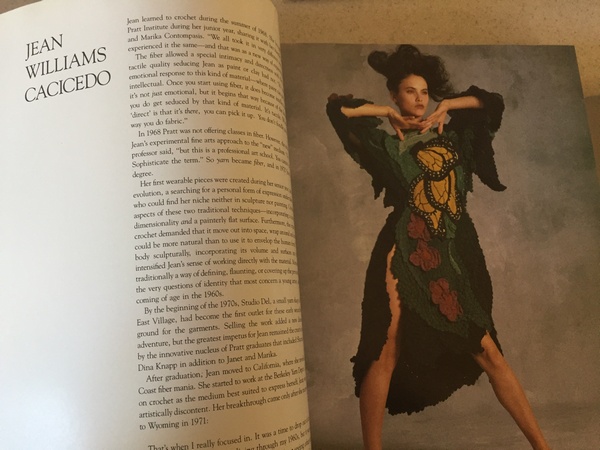 Tim Harding who invented the slashed clothing that was layered cloth and later cut into and washed and washed to fray the edges. I did several vests like this and only one full length coat. The best material I could find was cheap and loosely woven cottons from India in very garish colors. It really fluffed up nicely. Somewhere an Australian aboriginal girl might still have hers. 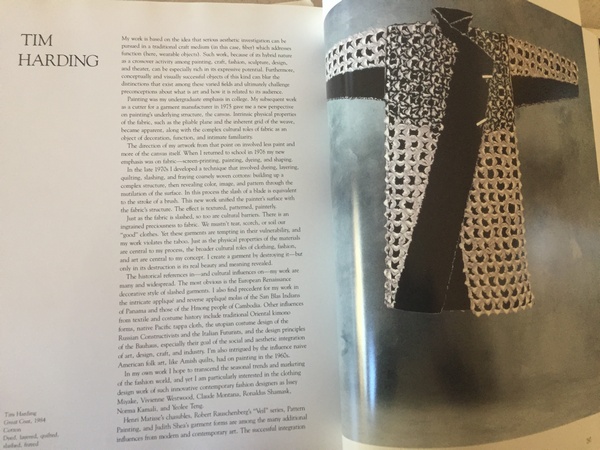 And Ana Lisa Hedstrom. I took a workshop on various discharges from her in the 90s and some of the lesson pieces ended up on a jacket that I gave to David Baker, a favorite masseuse here in Brasstown. 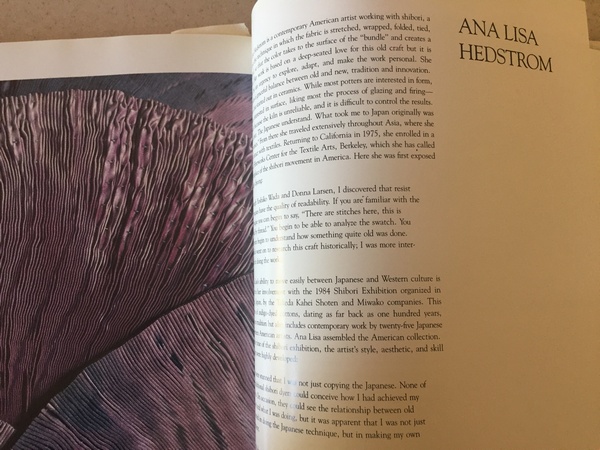 And Randall Darwall. When I bought a large shawl from him in the late 90s, I went up to my hotel room, took off all my clothes and laid under all that rainbow dyed silk. I no longer go places I could wear it, but might just treat myself to a good lie down with it. 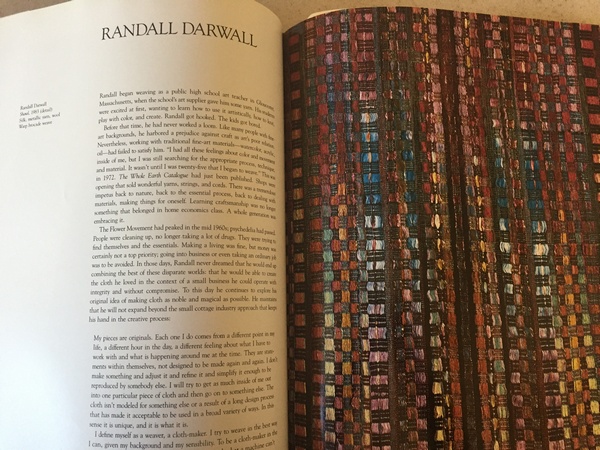 When out in San Jose, California in 1991 for an international textile conference, a friend and I went up to San Francisco to visit the Obiko gallery where the best of the best Art to Wear could be purchased. Or at the very least fondled. I came away with Sandra Obiko’s business card. But on the way into the gallery I met a homeless woman selling hand made jewelry. Her name was Dolores. I bought two pieces, chunky with several African trade beads. Soon after I got home I made a small figure of her, called it Dolores, filled her body with cheap African clay beads to give her some weight and adorned her with several beaded necklaces. I kept Dolores for over twenty-five  years….only parted with her last year.

Anyway here is Sandra Obiko’s card. It has a beautiful embossed cover. 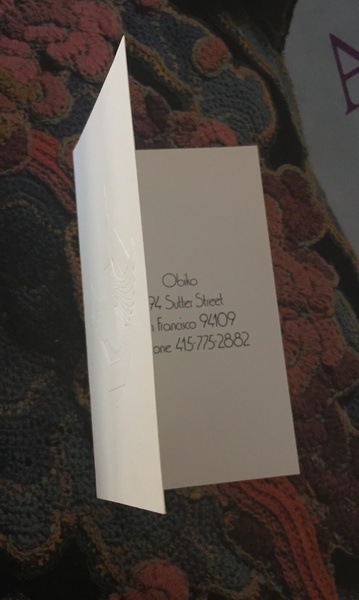 When we were in the gallery an older woman, about my age now, came in and tried on a necklace. It was very much of its time….weighted with special tokens spaced out just right. She bought it and I wanted so much to be her, to have that necklace that I had just touched and let go when I saw the price of near $1,000 as I recall. I watched her wear it out into the San Francisco sunlight and was so envious. I hope a daughter or grand daughter is wearing it now.

But in looking up K Lee Manuel and the story I read about her leaving feathers around, I came across a downloadable video of Sandra Obiko’s gallery….http://www.textileartscouncil.org/obiko-archive/. It is so much fun to flip through all the artists she carried. One of them that I was so glad to see because his work is not in Dale’s book is John Marshall with his rice paste Japanese colored cloth made into clothing. He and I were doing a fiber market many years ago and he wanted one of my little pins of a tiny old man in textile clothing with a twig for a body. He traded me a swatch of his cloth, about a quarter meter for it. I still have a bit of that cloth.

I never thought when I bought that book in 1986 that over the following years I would share a bottle of scotch with one, trade goods with another, buy a piece of artwork (feather) made by one, take a workshop with another, and purchase a cloth that made me take my clothes off from yet another.

The story of K Lee Manuel and her generous gift to the world via her magic feathers must have been written in Ornament magazine. It was the inspiration for so many of us enamored with the whole idea of Art to Wear and although I remember the story well, I do not remember the source.

But aside from all that getting side tracked, I cut my first five foot piece of paper today to draw/paint on to put in a bottle. The paper was too porous for my watercolors, so I have gessoed the length of it and might now do small silver point drawings instead of painting. I will show how far I get next time. 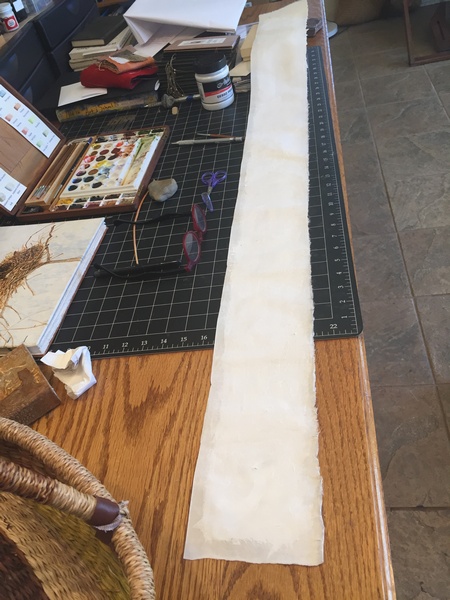 In the meantime, Lee asked me if I wanted to go to the dump today. We took all the trash from his truck and put it in my car. This may mean that he has decided to no longer drive. I hope so as he does not use a phone and going to the trash once a week was the only time he drove. We finished that excursion with him telling me, “Thank you for doing that.” I told him, “No worries, it was fun……as long as you do the dumping into the bins.” Then it was lunch….hot dog for him, soup for me and a shared beer.

Til next week or whenever.