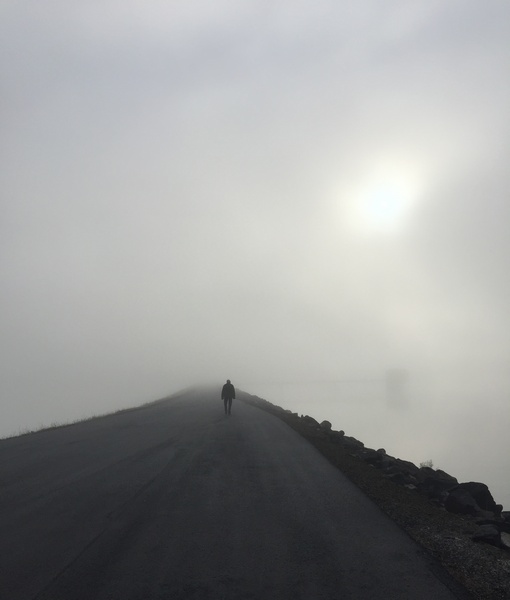 Remember how I said I trust nothing? I took this picture of Lee a couple years ago as we walked the dam and thought it perfectly depicted the fog he was entering with dementia.

This morning at three am I received a call that he had fallen again in his room at the Memory Care facility. Then at 8:30 am they asked me to come down and see him. He was not at all in the condition the psych ward had told us he was. He could not walk and chattered nonsense. He was not sure who I was, forgot as soon as he remembered.

The Memory Care place can not deal with this much physical failure and told me a Nursing Home was the only answer. He also needs someone to spend twelve hour shifts from 7 p.m. to 7 a.m. in his room to help him if he falls or needs to go to the bathroom. Luckily this afternoon they found people willing to do that from their own Care facility. It is a holiday weekend and if worse came to worse I would have to go and spend the night in his room.

I called the new Nursing Home built on the road to the dump (the one Lee and I watched go up on our weekly trash trips). They have a room available and all paperwork is being faxed to them. It will take a few days and then Lee will be taken there to be isolated for two weeks during covid times just to be safe.

I had other plans for him three and a half weeks ago when we furnished his room and got everything just so.

“Just so” is such a temporary condition.

My friend dropped off a bottle of Crown Royal Reserve this afternoon. A good nights sleep, a walk at the dam, trip to the bank to pay these miracle night watchmen.