The hard part first. Late yesterday afternoon Lee broke down and said he didn’t want to stay here anymore. He wanted to go home. He wanted to see his brother who died several years ago. He wanted desperately things I could not give him. I tried explaining that this has been “home” for nearly thirty years. And if he meant returning up north where our grown children live then he would be very cold and stuck inside for months. I pointed out the windows at all the things that he has done here over those thirty years. But in the end all I could do was let him cry, try not to cry with him and then when enough time had passed, I poured us both a very stiff drink.

My dental hygienist, who went through this with her mother, told me just yesterday morning that I should get someone to just come in and get to know Lee and vice versa. Maybe sit with him for an hour or so. She told me that I did not need a professional service for Lee, but sort of a friend.  I had to be honest and tell her that we knew no one who would do that …… be a paid for friend. She suggested I ask our mutual cleaning lady if she knew someone who would like to come and get to know us for some financial compensation.

I will now start looking in earnest for that person. I will also watch Lee more closely and try to find a way to keep him from such overwhelming sadness that seems to come later in the day. As I write this he is sleeping in his chair and I have an eye on the impeachment hearings. We will both need those drinks in a couple of hours.

Now for the good things.

This morning Lee helped me unwrap the third and last section of contact printed sheets for another accordion book.

I am piecing it together to get the twenty-eight pages that are in the Bush Book. This new one will need a cover and then be ready to start painting in wildflowers.

Only three more double pages after this Luna moth and the Bush Book will be finished. 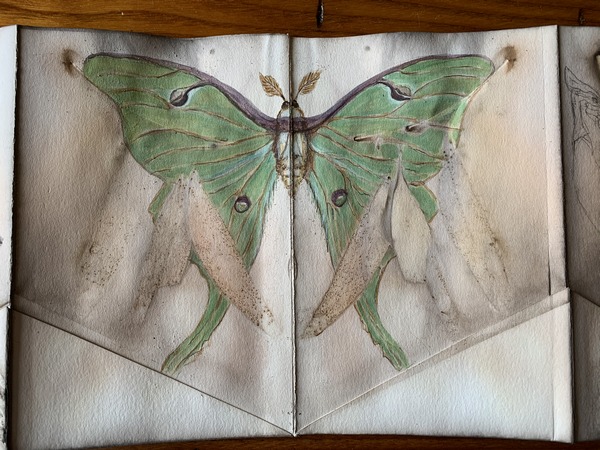 And now the latest four days of Drawing a Day with Haiku.

is what this little fellow

is trying to do.

She has been sewing

and still not finished.

in an empty bowl.

just so they can show possums

how they should do it.

Lee and I used to make these kinetic toys. This dog and possum ones are ours. The chicken pecks at the road on the other side of the double yellow while the possum nods his head and moves his tail up and down as he appears to follow the chicken. The weight that holds the strings underneath is a possum with tire tracks across his flattened body. Possums are our most abundant road kill.

We had so much fun with these.