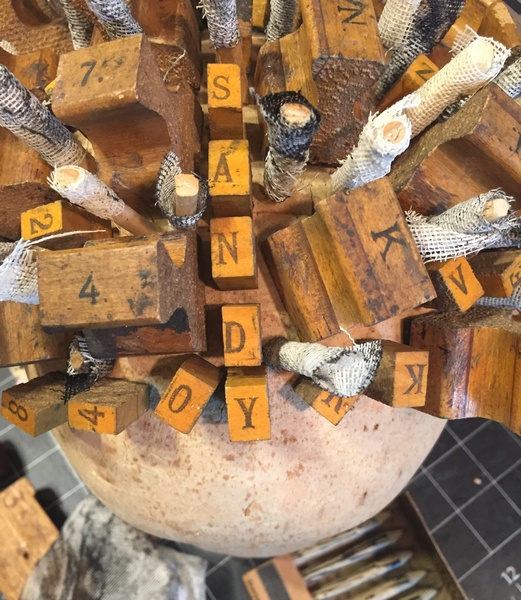 I put the first head on the work table and decided to make it all about the printmaking part of me. I pulled out all the old type stamps that were collected years ago for no other reason than to own them. Not one was ever used to write a word. They are as gummed up now as much as the day I bought them. So I glued them onto the head. And then filled in some of the empty spaces with used tarlatan rolled on small bits of chopsticks. I have no idea why I had so many sets of Chinese restaurant chopsticks in my stash, but they cut easily and now whatever I had is in pieces with tarlatan glued to them. 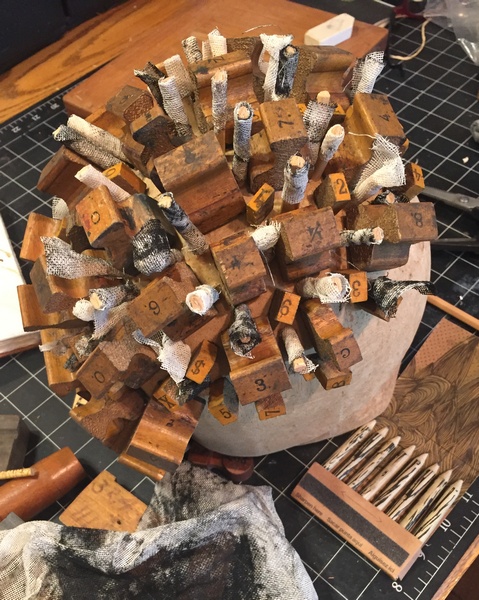 I have some super large wood fonts that I may fit into the head somewhere. But first I think that I need to construct some dormers out each side for the right and left brain thinking. Nice roof topped dormers with collections inside of prints, small books and maybe these cute little pencils that seem to fit. I think there needs to be more stuck into her hair bits. Something equally messy. And each of the chopstick ends that show need a glob of printmakers ink stuck on top.

I pulled out old carving tools that probably are not any good any more to stick into her head but found I could not part with them just yet. They may be able to be used to do more carvings. She might need a small carved wood block stuck to her forehead. She might need it to be recessed into her forehead. That is a better idea. So obviously this is still in the “planning as you work” stage. More as it progresses.

I had company this week. Two of the children from deceased siblings. Of the six children that my mother had there are only two of us left….me and a sister that was not very good at it, so we parted ways many years ago. Every family has one that you really wish you did not have to invite over….usually the old conservative and grumpy uncle….ours was this sister that, rather than endure, we just took her name off the Christmas card list and everything else fell into place. Life was better without the drama that attached itself to her.

But with the two, one niece, who is actually a grandmother and one nephew we had fun remembering old times in almost forgotten places. Lee joined in by way of smiling at all the appropriate times but asked as we waved them off in the driveway, “Who were those people?”

I tried to jog his memory about going to visit the niece when her mother was alive. There were loads of stray farm animals and dogs and cats and a catfish pond at their place located near a far away town in the deep, sultry south of north Georgia country. He still looked puzzled. I even told him of my sister’s (the niece’s mother) collection of ashes of passed away pets and relatives. She had quite the collection in her closet and when she moved in with her daughter, each was laid to rest around the property…..all facing the catfish pond. I smiled when I remembered this….especially the ferret placed near the poodle with painted nails.  Lee smiled too but any memory of who and where I was talking about was lost.

I am still smiling now as I get this posted and take Lee out to the brewery for our Thursday lunch.