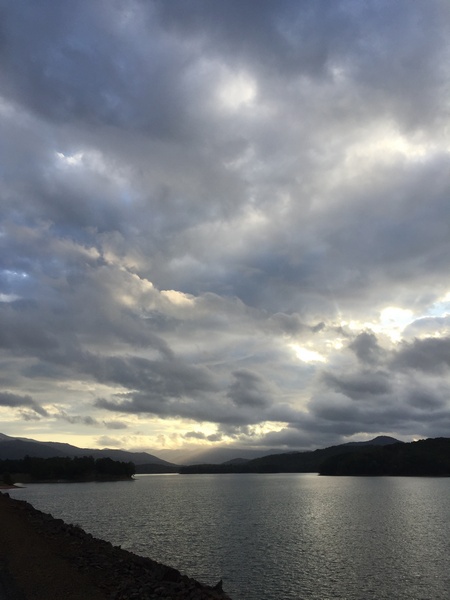 I took this picture at the dam yesterday. Doesn’t it have the look of something wonderful about to happen?  Well I am still waiting.

There is nothing so wrenching as the sounds of sobbing through a call from thousands of miles away.  And then you struggle so hard not to join in as they tell you that someone you cared deeply about is gone.  After you hang up there is the steady flow of tears that make you think, “I can get this over with if I just keep at it for a bit longer.”

I actually was able to collect a few….and that is not easy to do when you are guessing which part of your face the next one is heading for. I am using a very thin plastic vial with a screw on top. Isn’t that funny to say how to catch tears. I know it sounds a bit nuts but looking at the tiny amount seems a victory of some sort. I have physical proof of a feeling!

Yesterday I did my drawing a day with haiku for our friend, Andy. I used the green earth pigment he had bought in Italy and gave me the last time he was in town. 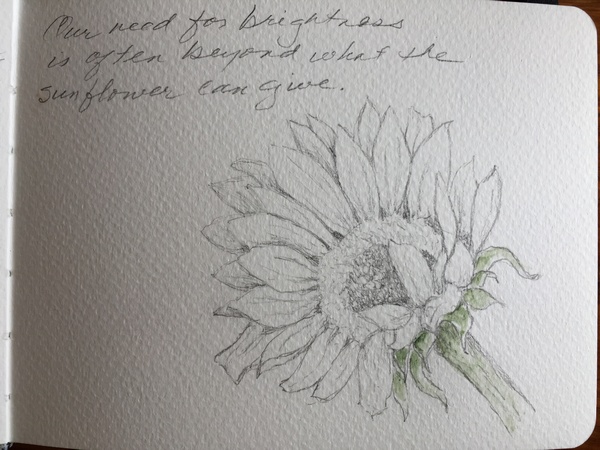 Our need for brightness

is often beyond what the

His partner told me that she was using my small editioned poetry book, Distance Matters, to help her get through these past weeks of caring for Andy. She said she was going to settle on one to always remember. I think this one would be a good one for her and us too.

We do not plan

and ride the tide

And I received this message from a friend asking about my wanting to make donuts like I used to have at cider mills in Michigan…..what I tried from her recipe did not taste anything like I wanted them to and she said this,

……..but I got thinking about fond memories….if we were able to revisit, would they be as we remembered them or as we recreated them over the years?….would we be disappointed? Or are they better just left alone ….to remember as we want?

I am leaving those donuts alone. Now the failed ones are in the freezer waiting to be reincarnated as something delicious with poached egg and cheese with bacon. A new memory that may or may not be a good one…..depending on the taste.

And I am keeping Andy in a safe harbor to revisit many times. For now he is helping me fill a vial of evidence that he mattered very much.

Here is a picture I took this morning. I looked at all these variations of earth pigments and remembered how I used to not hesitate to scramble down to places like this and carefully put them in other containers. Evidence again of collecting and having been something that mattered…..in this case, a place. 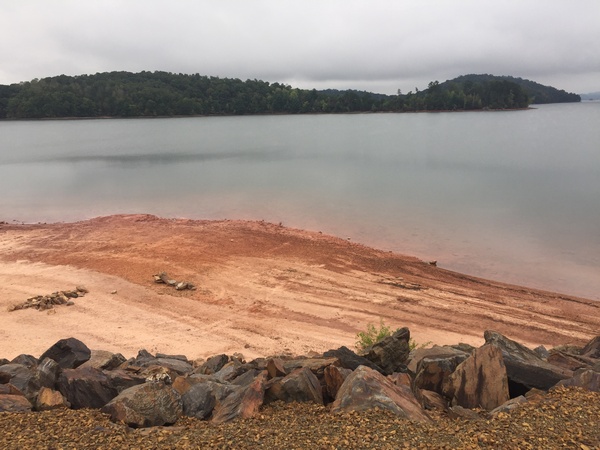 I should have kept my collecting to these small vials of tears and places. Instead I now am trying to find ways to rid myself of too many things. A simple apothecary cupboard would have been so much better.

And I am learning to unpack my suitcases full of plans that made so much sense a few months ago but now are weighing me down with their expectations. I will let you know how that goes.

Here is a final tip on collecting your tears. Keep two vials, one upstairs where life goes on and the other down stairs where you can completely lose yourself to sadness for just the briefest of time as you try to write about it.

Gotta go, Lee is back overhead so his wandering the yard must have come to a close.