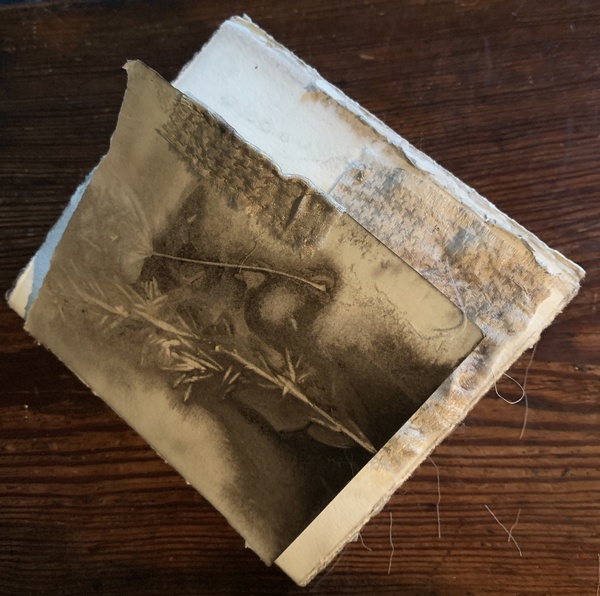 I took the odd leftover pages from some of my contact printing that was mostly used for The Stoat Story and bound them together in five signatures using the coptic stitch. Next I put some of the dyed silk shirt that is over thirty years old and also was colored with some of those same grocery store Eucalyptus leaves and pod and tailor tacked them into place here and there on the pages.

Now I had something to draw into besides just the plain pages. I thought it would be fun to draw my life in clothes. It would be something else besides the Fairy Book to work on and something different from my Drawings a Day books. The fun part is trying to remember the first clothes you wore that left such an impression that you never forgot them…whether you liked them or not!

Here is the inside cover with the rhyme that my mother said several times to me.

There was a little girl

who had a little curl

right in the middle of her forehead.

When she was good she was very, very good.

And when she was bad, she was horrid. 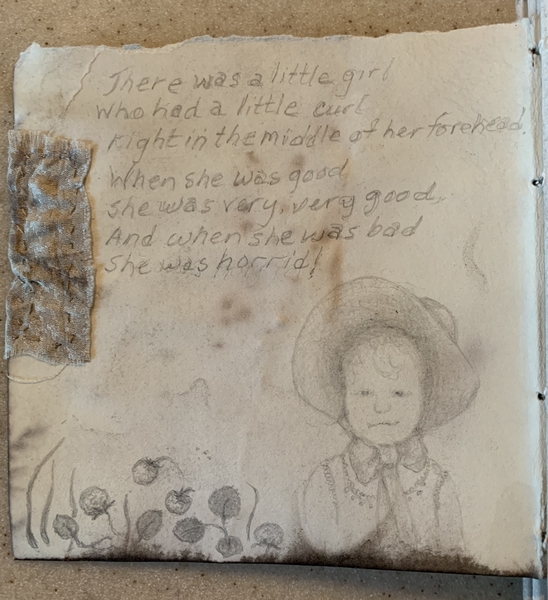 I am about three here and wearing the dreaded Sun Bonnet Sue hat my mother made me wear whenever out in the sun. I remember picking strawberries and having to wear some cute little sundress as well. These drawings are from memory and not old photographs, that I really hate looking at.

Then things got better. 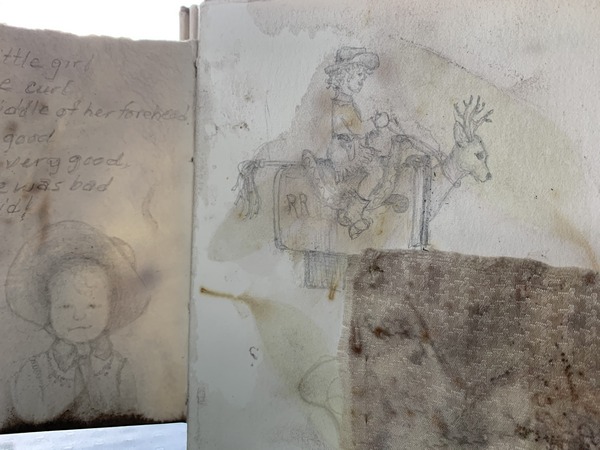 My father rigged up an old mailbox with a saddle, mounted deer head and mop to be my horse. I had a brand new cowgirl outfit that probably contributed to my love of fringe through the years. I so wanted to be a cowboy back then at about five years old. And very soon ditched the skirt for those paired jeans and shirts….plaid flannel-lined denim jeans to match the plaid flannel shirt. 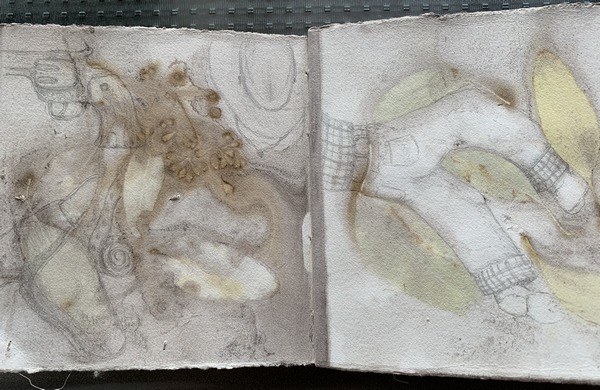 On the left are my hat, caps, six shooter and holster. These years were heaven for me. The only horse I had after the mailbox was my imaginary horse, White Cloud.

Today while Lee is with his new caregiver, I had a chance to move on a few years to the dreadful cotillion dress that I had to wear to a dance that I wanted no part of. The drawing is of me standing on the toilet to stay hidden from the chaperones out looking for me. I stayed there until the dance was over. I will post that later with some equally dreadful shoes from childhood.

I am going to tack on a story here because there does not seem to be another place to put it.

When last in Australia, March of 2019, I joked with a friend in Hobart that I just needed to find a man to marry when Lee was no longer with me. Someone in Australia so I could just move there….preferably Tasmania.

We went off to Bruny Island for a fun day with another old friend, and stopped at a place for a flat white and muffin. I told the young fellow that I was willing to pay $1,000 just to get the ball rolling. He laughed and said he and I could start in Dubai. I lost interest.

But my friend reminded me that same sex marriages were legal now in Australia and she was single.

Well, we always were quite compatible…ever since we met in the late 90’s at basket workshops I was teaching down under. Her house was always open to me for staying over. She always picked me up at the airport, always got me off when it was time to leave. She always took me to the best shops, got me to where the workshops were being held, fed me well, had mutual friends over for good visits….she is simply the best.

So when she suggested that her and I could get married if it came to that, here is what she said. “I do love you, Sandy. And I’d marry you, but also I could really use the money.” We laughed at that. We laughed at so many things over the years. I can never think of her without just grinning and remembering some funny thing she said.

I remembered her in the middle of the night when I would wake up thinking how very special she is. So just short of six weeks ago, I sent her the check for $1,000 US funds. In AUD it would be almost worth an additional $400. I sent it in a lovely botanically illustrated card done by another friend’s mother, and just used an international stamp for postage.

I asked my two kids if they thought it was a dumb thing to do. I told them I wanted to use my own money from traveling and teaching down under. They both had met Jude on their own trips joining me in Australia over the years, and thought the idea was a good one and to go ahead and do it. The memory of her makes them smile too.

I thought it would be there in two weeks tops. She never messaged me about it. After a month I thought it had become lost and I might be out the money altogether. Mail was coming from Australia within four weeks, so I was a bit worried that I should have gotten her particulars on her bank account instead of being so impulsive. But I so wanted to imagine her face when she opened the envelope.

Well, the other day she received it! Just a bit over five weeks to get there. She says it is the best marriage proposal she ever got and is excitedly thinking of the things she needs that this will help with.  Jude gets the money, I get to smile a whole lot more and when we get married is anyone’s guess.

Here we are in a tavern on Bruny Island. 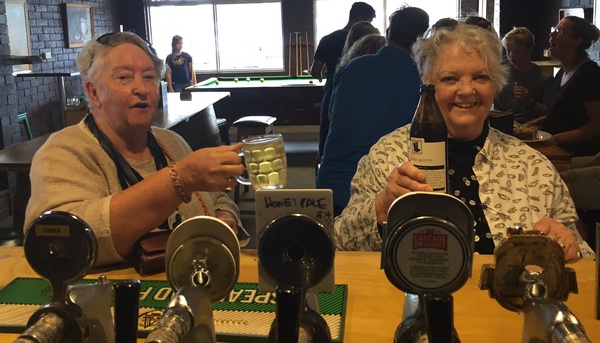 So the moral to the story is, “Just do it!” Especially if it wakes you up in the middle of the night and keeps you smiling. Just do it.