The not-so-good news is that the care center called today and Lee has tested positive for Covid. He has been taken to a different area with four others who tested positive. He is still eating but has a cough. He has had his vaccine and booster so there is no way to know what happens next and how severe it is.  Omicron seems to get in anywhere. Even where there are strict controls. I did notice this morning at the dentist office only I wore a mask in the waiting room. It was sad enough before with all the self-educated-through-the-internet who became anti-vaxxers, but now add those into the mix who are just so tired of the Covid alterations to our lives, and you have a perfect storm for more infections. It especially hurts the very vulnerable but god forbid we think of anyone but ourselves and the inconveniences of caring for others. It is the most selfish of times I can remember in my lifetime and the most willfully ignorant.

On a better note I have my art work to take my mind off things. I especially love this barred owl in the Bird Stories Book. 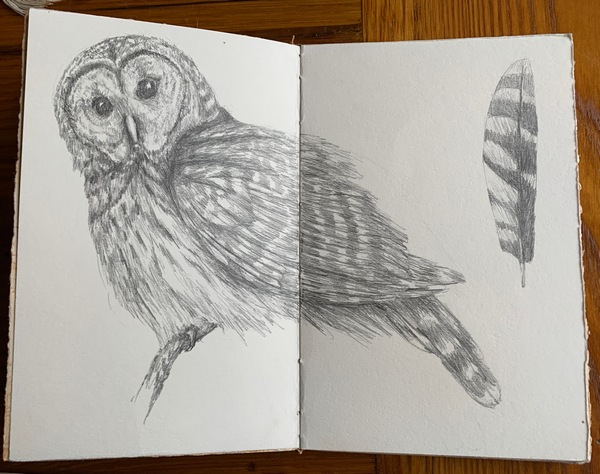 And another double page of bird feet. 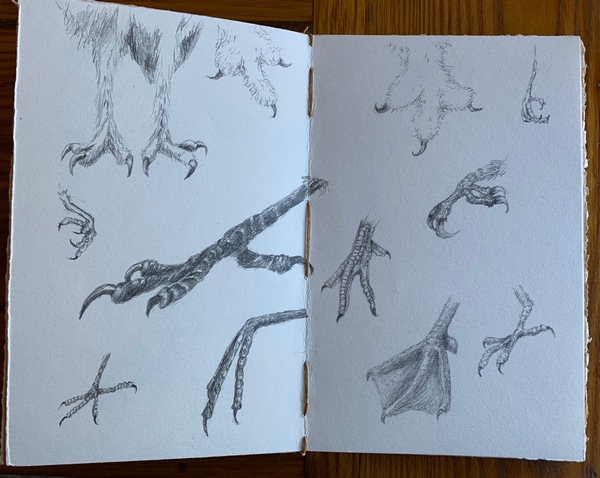 Following up on my wood block of the grey owl, my new brayer arrived. 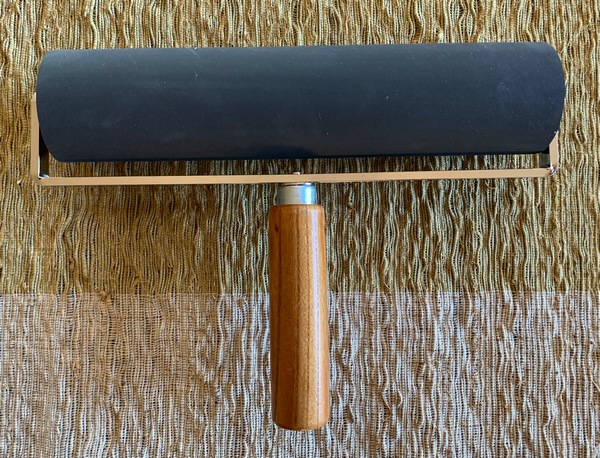 I got the block all lined up yesterday and rolled the ink on. 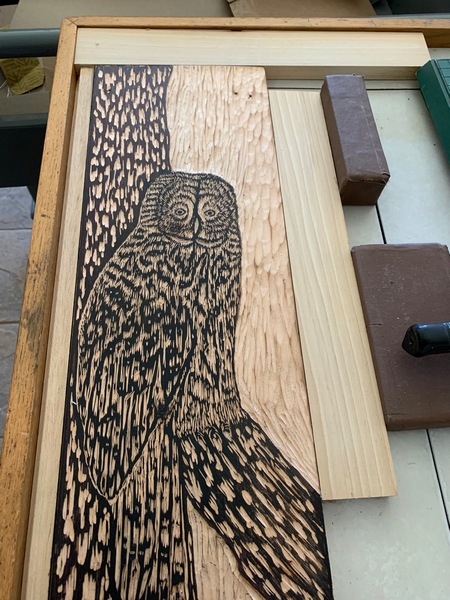 I am starting out using a lama li paper with some fibrous inclusions. The first one had not enough ink but the second one was better. It took some getting used to the new beautiful brayer and loading up the ink. 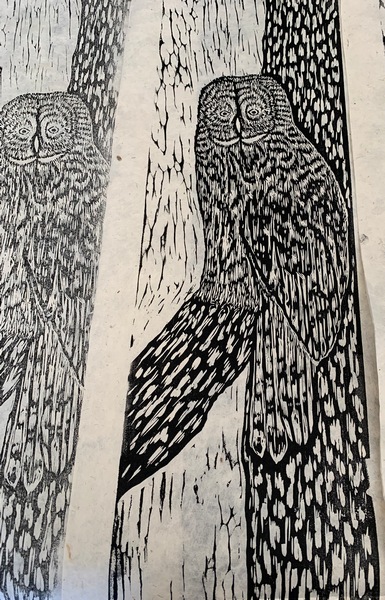 Looking at this print I decided that the feathers over the feet were too straight across…sort of like a fifties boys haircut administered by his mother and a bowl. So I cut them into a more realistic angle toward the tail. 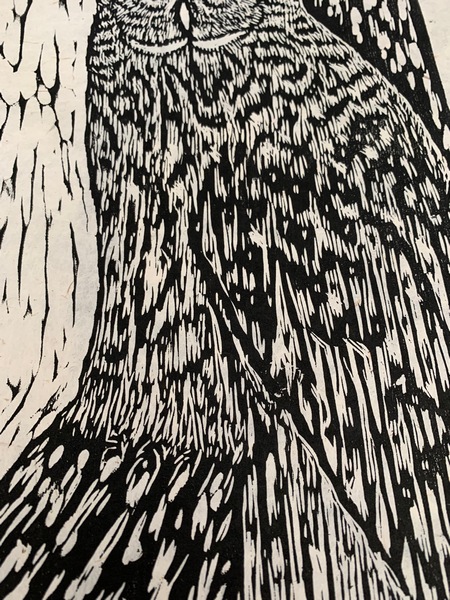 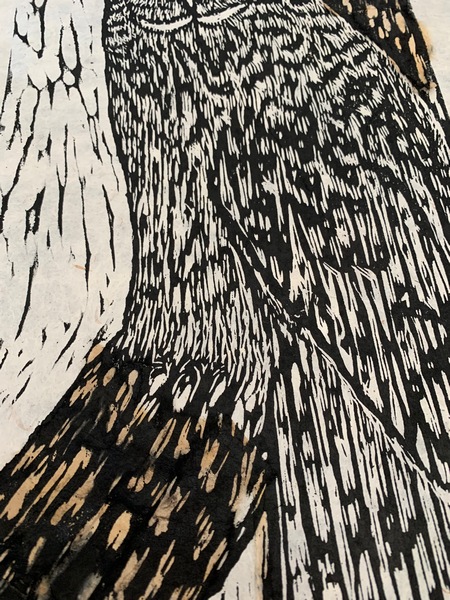 See what I mean? The third print I used a chine colle techniques to add contrast between the owl and tree and background. 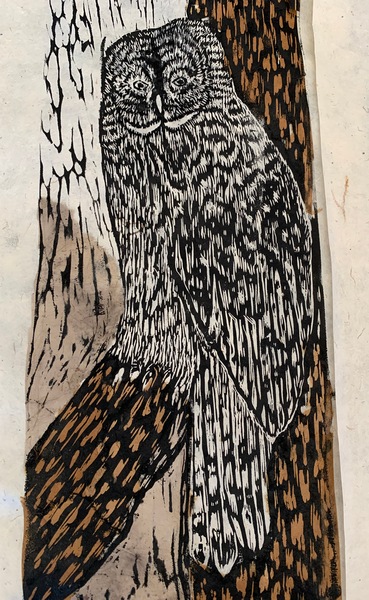 I used my not-so-good contact leaf prints on tai kozo for the background hill and a Lokta paper for the tree. I also stuck on a white lace paper over the face. To get chine colle to work I had to make up a corn starch paste to carefully brush over the backs of the added papers to the block. That way those papers will stick to the sheet they are being printed to. It is a bit messy as the papers want to stick to the brush and shift in their positions. I was so much better at this in under graduate school in the nineties. But I persevered and did a fourth print using added papers only on the tree. 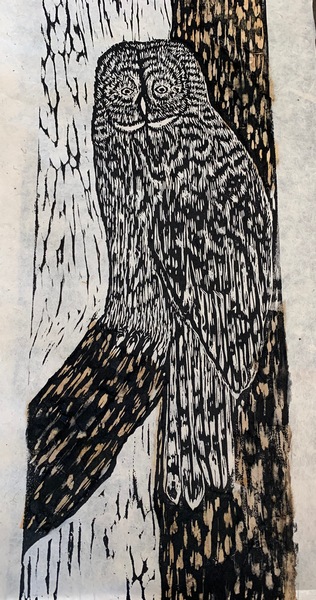 What happened on this one was too much paste and too much rubbing so that I lost some of the lights in the trunk. I don’t mind it though and may use it as one to stitch into. Right now I have to wait for the ink to dry. But here they all are laying across the board shear. 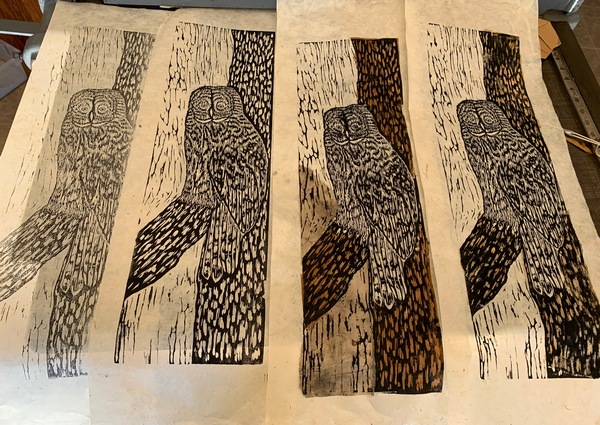 You can see on the one with the “hill” that it was not a good idea to add the lacy white paper to the face. It only captured more ink and made the space between his eyes darker. I don’t mind it though. When I look at these and other prints of mine, I am careful not to be too critical. And I think of an elderly poetry teacher I had, Gene Hirsch, who said, “There is no such thing as a bad poem.” My prints are “poems” that need looking at in a different light and maybe, just maybe, need a bit of touch up. I will make more prints of this owl just to improve my technique, and because I love the sound of that big fat soft brayer rolling over the ink and then the wood.

I meant to mention in my last blog that the other day at the gym near my new house, I walked into the court area pulling on my boxing gloves. I wanted to just knock the crap out of something. There was a big man off by himself singing. Closer to me and my punching bag was a man with a cap on his head that had a spinning propeller on top. I asked him why he wore it. He grinned and said it was to make people smile. I smiled and said that I was glad it was not to acquire some super natural intelligence. He smiled back and asked how my punching was going and if I could put more punch into it. I said I’d like to knock the bag way across the room. He smiled, in fact he never stopped, and asked if I would like to try using his racquet to join in a game of pickle ball (a game like tennis but easier). I told him no, but thanks, I just was not much of a team player. He turned away and I called him back to thank him for wearing his hat. I hope he is a regular, and I hope the singing man is too.