Back in 1997 I was asked to come teach in Australia for the first time. I owed the invitation to a fellow basket maker who taught very structured, traditional Shaker baskets.  He found himself caught in a nest of very unstructured students who found it hard to settle down with a new material and then being told how to use it. It was a new thing to him because all of his students here in the states were anxious to learn the traditions and techniques of Shaker basketry.

And because he and I shared a need to behave in a non-conforming manner in tightly-ruled basket conferences here in the states, he thought I might be a good fit for the “wildness” down under.  So I got the call.

And I got introduced to Inga, one of the most out of the box thinkers taking workshops. I think Inga and her close companions came to those textile conferences to just be together and do their “own thing.”  Once they got their hands on a new technique or material they were ready to tune out anything that came after.

Once on an early teaching tour down under they were told to “look after Sandy.”  It resulted in Inga coloring my hair red and orange while Charlotte fixed me tomatoes and eggs for breakfast and made sure I ate them.

But that first time I was thrilled that I was going to meet Inga because I was so familiar with her “Robes of the Imperium” series. They were featured in almost every Textile Fibre Forum magazine that I had at the time.  Back in the 90’s if you saw an ad for the magazine, you could send your name to Australia and they sent a magazine to you for free.  I loved Inga’s work, her imagination and her enthusiasm.

Here is one of the robes. Each one was named for the responsibility of the wearer in her imaginary country.  And each one also had a bag they carried. 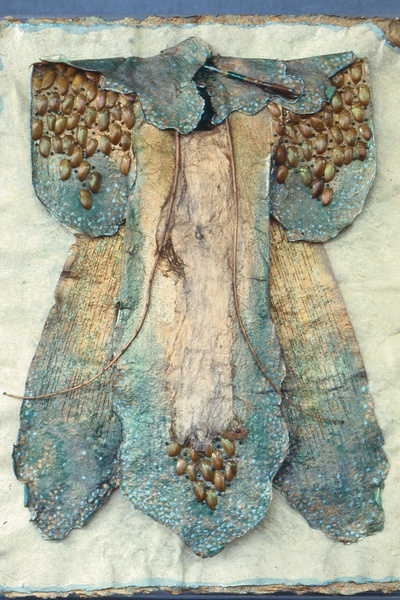 The Beetle Totem Forrest People’s Robe.  Inga had skills in paper making and textiles.  And as I recall a degree in anthropology.  All this came together in the series. This one even has the shells of Christmas beetles attached. The robes averaged about ten to twelve inches high.

Here is the gathering basket for the Forrest People. 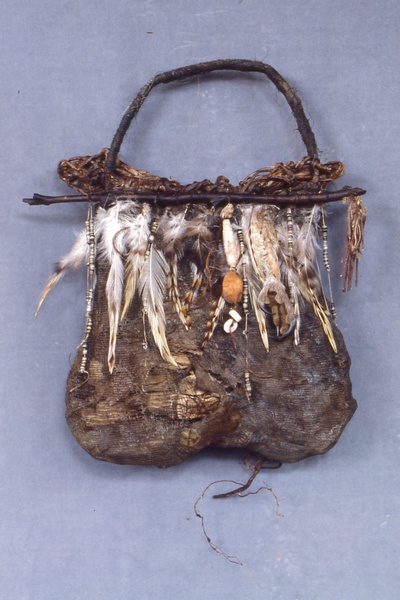 These works were the ultimate in “mixed media”, an area of art making that was drawing almost all of us who leaned toward the tactility of fibers at the time.

Because my workshops were not technically structured, more idea based, Inga signed up for a few of them over the years.  She sat near the back, kept to herself and produced some of the most interesting things.  Most times she would even prepare a special book to use in the class. In them she would make drawings and take notes.  Inga poured herself into the time we had together and I had the pleasure of watching it all happen.

This is a piece she did in my class as the start of a series of “Unwilling Journeys”.  It was all about the women in her family that were taken to places without being given a choice….from an early slave taken from Africa to Haiti to her and her mother arriving in Western Australia via a ship carrying “orphans” from England shortly after WWII.  Her heritage was rich for expressions in artwork. 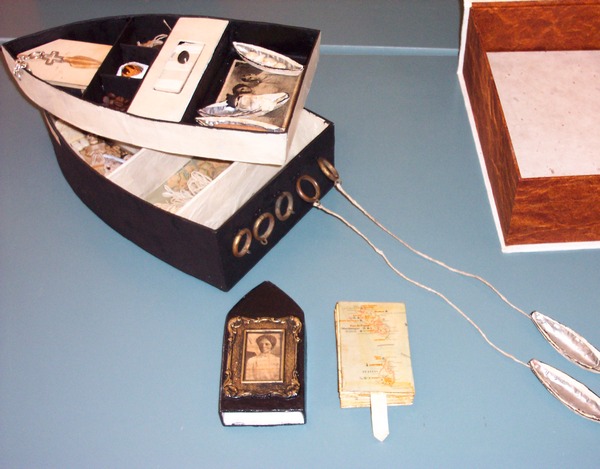 When she first made the top layer and thought that was “it”, she said, “It looks like a biscuit tray.”  I told her that it did not have to but could be a part of another larger piece with more attached to it.  She just kept building and building and making and making.  I loved watching her work. 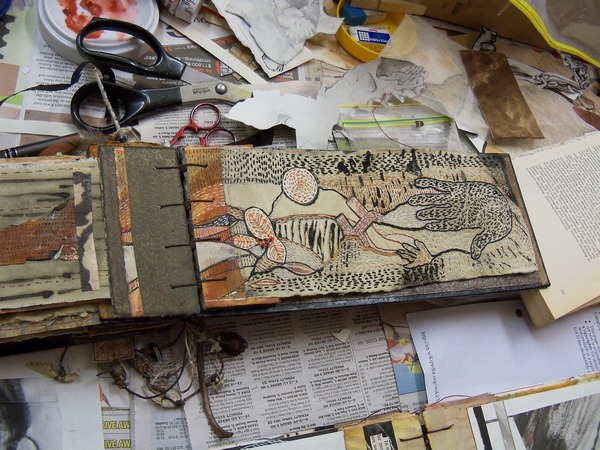 One of the many books she showed me in her studio several years later.  Inga could layer so much meaning onto the pages.  This one is completely stitched in kantha marks.  I will note here that several artist books made in Australia have this long horizontal format.  I think it is the influence of the land that just stretches out forever.  And I do know that just looking at this book makes me want to go in the studio and make one for myself….stacks and stacks of pages that are later bound together in something that feels so intimate and exciting as this one. 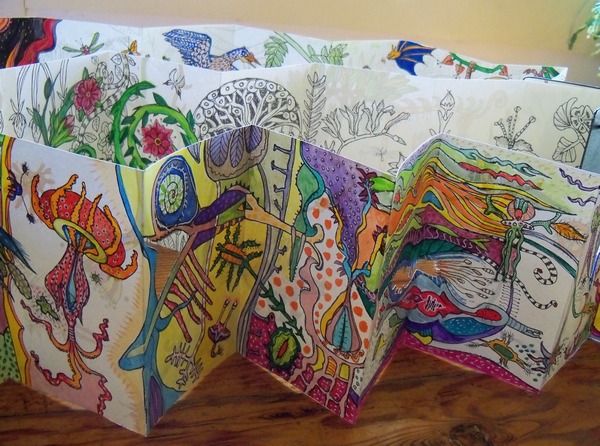 And she could easily switch to obsessive drawing and using bright colors. 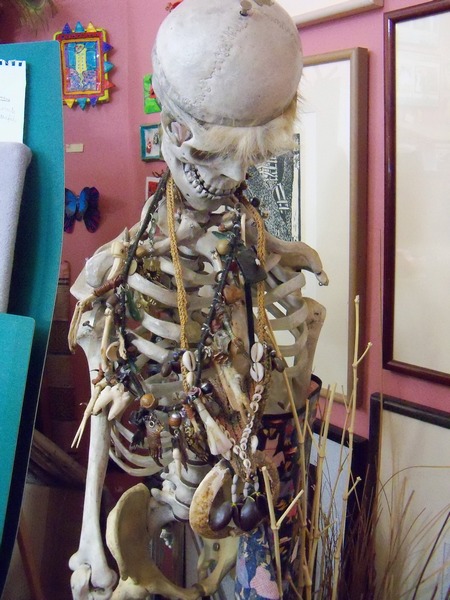 This skeleton stands in her studio and wears some of Inga’s jewelry collection. 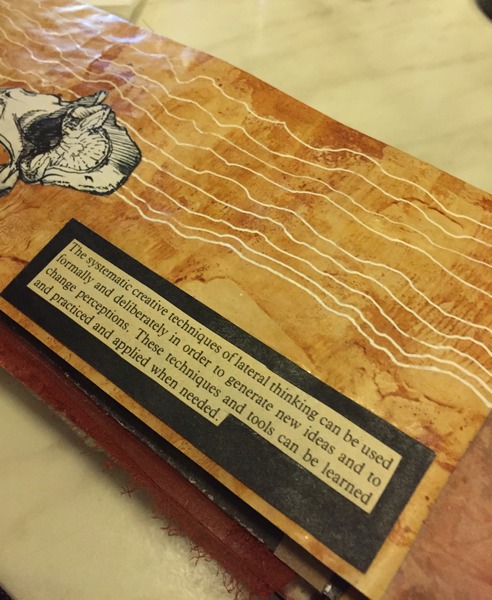 This page from another one of her artist books has a section that I believe comes from Lateral Thinking: Creativity Step by Step by Edward deBono.  That book was in my bibliography for students and was about the only handout I ever gave out in class.  My own copy sits on the vanity in the bathroom near my studio.

And this was the last time I saw Inga in Katoomba deep in the Blue Mountains west of Sydney.  We sat in a cafe sharing a bottle of Yellow Tail red wine with our mutual friend, Kath.  Inga was catching us up on her latest projects.  As I recall it was a book of drawings all about illnesses and waiting rooms. 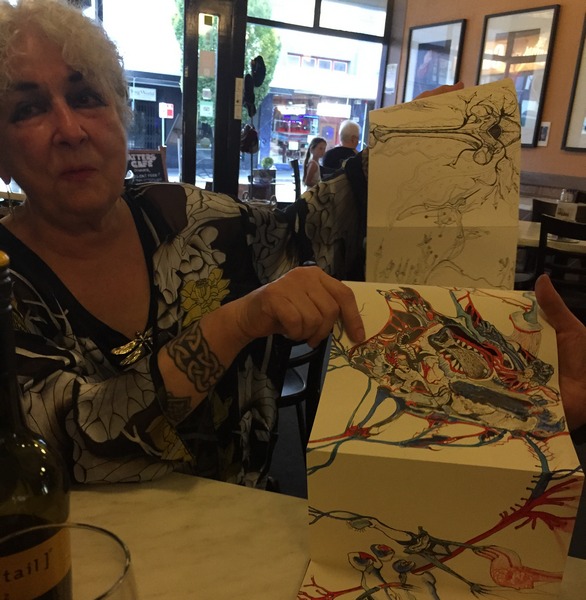 I think it was Inga’s unique approach to what she wanted to say as an artist that got me invited to Australia in the first place.  As my traditional friend told me upon his return, “Sandy, some of them even have tattoos and dress up like Cleopatra.”  She did have great clothes, jewelry and a beautiful look about her.  She inspired me as a student and an artist and was even a good dance partner.  I think the last time I danced was with Inga maybe twelve years ago.

I will forever be grateful for the experience of knowing her, her work and her non-conformities.

So there is another artist……I will look for more for later.