I was just saying to the caregiver that we are living in a time when every day is Tuesday. Nothing big happens. There is not much in the mailbox. One day just rolls into the next. And almost all of them are less than exciting, less than memorable. There used to be a difference between say, a Sunday, and a Tuesday. Sunday we started with breakfast out and found fun things to do after we got home. Now there is no difference than if it was Tuesday….no breakfast out and little to no mail.

So I am reading stories, books to Lee. Both of us can get lost in someone else’s life for as many hours as it takes to get through the book. I just finished reading Diane Setterfield’s The Thirteenth Tale. She tells a good story. Interesting characters, lots of ways to change your voice when you read it aloud…and you can temporarily become anyone of them. Reading aloud is magic. I feel myself becoming my mother. She was so good at taking us away with the classics she read to us. Not those silly Disneyfied Golden Books but big hardbound books with loads and loads of words that chased each other across the pages. Only rarely was there a full colored illustration that more or less fitted into what you had imagined.

I wish I had more time than my blog to write words that I know are just waiting for me to find the time to push from my fingers. Stories are just backing up in the shoe box I keep in my head to store the good stuff. It is full of 3 x 5 cards with pale blue lines full of names and “what ifs”. Sometimes I pop the lid just before going to sleep to put another card in there.

Anyway, there are two more new hardbound books on the table and another one on the way. Lee and I will get lost together in something that makes our endless Tuesdays more worthwhile. When I catch him napping while I read, I wake him and tell him we are getting to the good part and he leans forward and waits. We just need to have books with lots of good parts….easily done. Amazon! “Amazon” is like “abra cadabra” used to be. And there it is in the mailbox….plenty of new .3mm pencil leads, new shoes, fish food, cat litter, new shirts, whatever is truly needed at the time with the luxury of being able to send it back…..but we rarely do. You just have to be honest about how much you really need to have brought to you via the magic of Amazon.

Speaking of magic….isn’t this an inviting image? I altered it just a touch to a vivid warm I think they call it on my IPhone. But it does conjure up something that begs description….a story. 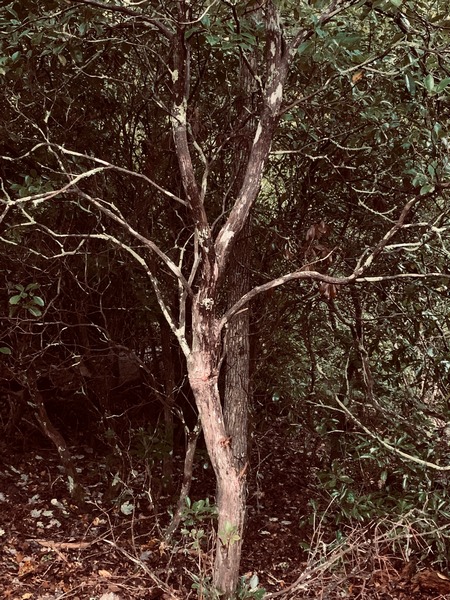 I reminds me in a way of the Eucalyptus trees in Australia that I never get enough of. Someone over there asked me why I found them so irresistible. And I said, “Just look at them! Not one wants to be ignored! They present themselves for your approval! How in the world can you possibly ignore that?” Something about this one seems to be giving me an invitation to come close and listen to what it has to say.

I also found a Howler Fairy in the crape myrtles. 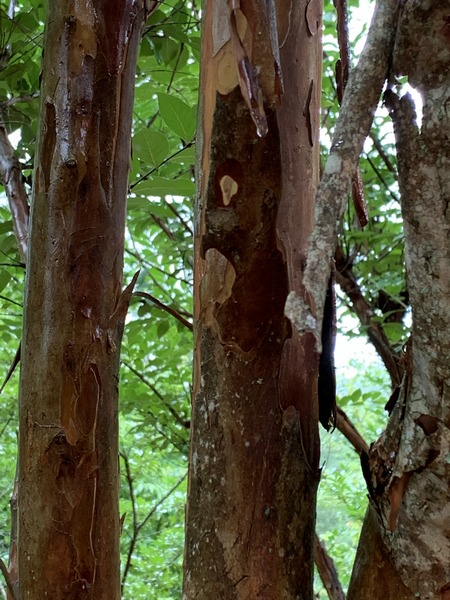 And the last four days of drawings. 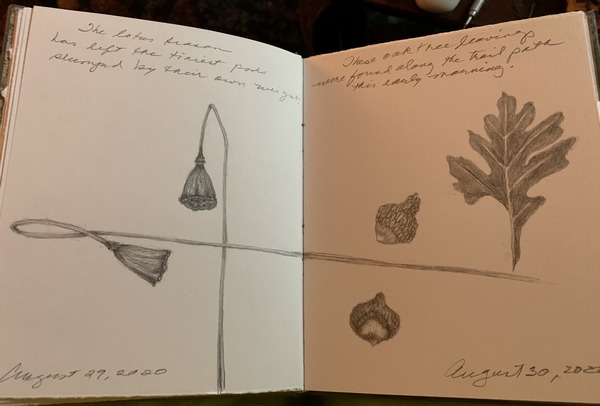 has left the tiniest pods

slumped by their own weight.

were found along the trail path 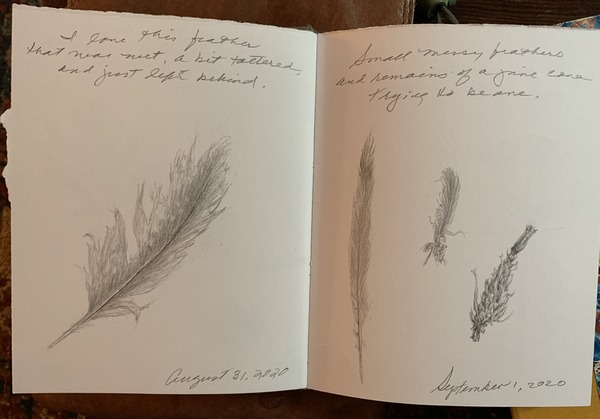 I love this feather

that was wet, a bit tattered,

and just left behind.

and remains of a pine cone

trying to be one.

I need to go through drawers, closets, cupboards and throw things away. But I am afraid I might need another responsible adult with me to do it. So much of what we have is no longer needed. And there seems no way to give it away. So much needs sorted. So much are things I don’t even want to look at let alone make decisions about.

I think it would be a good idea to have my kids arrive like they did at Christmas….but not until when things are safe again….say, April next year….after vaccinations. They could lay claim to the things they wanted and we would be left with only what we could see easily. No unwanted bits and pieces hiding away waiting to be important again. I get hard put to remember why they were important in the first place. I should have  been as unsentimental as my mother. She could give something away to the first person who said it was nice or interesting or lovely. She should come back from her place in the beyond and give me a hand here. Wherever she is, she is reading to someone and likely too busy enjoying herself to give me a hand….Somewhere I can hear her saying, “You made the mess, you clean it up.”

Well, yes mom, I am going to get to that. Soon.